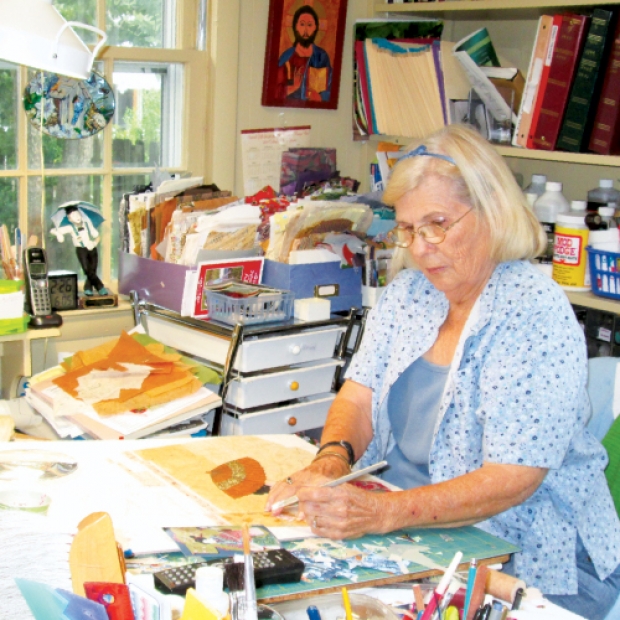 One measure of greatness in a work of art is its capacity to endure—to remain appealing and relevant over time. Myrtle Beach artist Dixie Dugan, who has been producing for more than four decades, displays endurance at the very core of her work and career; her retrospective exhibit at the Franklin G. Burroughs-Simeon B. Chapin Art Museum not only reflects the scope of her artistic impact on the Grand Strand but also serves as a testament to her hard work and creative tenacity.

“She’s just been such a successful artist in the area that we thought it was about time. She’s getting her due,” said Liz Miller, curator at the museum.

Dugan’s works, which date from 1970 to present, go hand in hand with the landscapes, people and traditions of the Grand Strand. Of the 60-plus pieces in the exhibit, many are on loan from local families. Her watercolors grace the walls of restaurants, doctors’ offices and businesses, as well as private homes throughout the area, and multiple local families have passed down her works through generations. “When I was a child, she painted my grandmother’s beach cabana on 65th Avenue—Elsie Hedgpetch was her name,” recalls Carolyn Swanson. “I think my grandma had that cabana for 30 or 40 years. The house is still in my family, but they don’t allow cabanas in that area any more, so it’s like a piece of history.”

As Dugan recently reviewed the pieces selected for the exhibit at her home in Myrtle Beach, she had a story for each one. The conversation is a dizzying catalogue of names, places and events that mark the progress of time along the Grand Strand.

“This one belonged to [the late optometrist] Marcus Smith,” Dugan recalls. “He bought my first painting; it was a little cabin on a lake in Mobile, Alabama. He paid $35. He ended up owning about 20 of my works. We traded; I’d give him the ones he liked, and he’d give me eyeglasses for myself and my girls—we did that for years.” When Dr. Smith passed away, Dugan helped his sons Mark, David and Frank divvy up the paintings as part of his estate. “This is Oliver’s Lodge,” Dugan continues, “and that’s Roosevelt—he used to work down there—and that painting belongs to Mr. [Edgerton] Burroughs.” She moves on. “This is the Pavilion—and that in the corner is my car. That one’s owned by Lineta Pritchard.” Next Dugan studies a painting of a building loaded onto a flatbed truck. “That’s when they moved the art museum up to its current location. Just put it on a truck and moved it on up 17. We worked for years to make that happen, and for a while we ran out of money and thought it would never happen. But finally, it did.”

Though she works like a born artist and chats like a Myrtle Beach native, Dugan is a Kansas girl by birth and spent several early years in Chicago, where she met her husband of 69 years, Tommy Dugan. After they married, the couple lived in Texas and Louisiana before settling down in Myrtle Beach in 1966. And while she always possessed an artistic streak, Dugan’s focus on art was delayed until her late 30s, after she had been a full-time homemaker and mother to her daughters, then 10 and 18.

Dugan’s local art career began with watercolor classes under artist and instructor Alex Powers, who was hugely influential; she takes classes with him to this day. When Dugan was 50, she enrolled in the art program at USC. She lived in a dorm room with her daughter, who was a graduate student. More than 30 years later, in addition to permeating the artistic culture of the Grand Strand, Dugan has won dozens of awards from organizations, including the South Carolina Watercolor Society, the Piccolo-Spoleto Art Exhibit, the Waccamaw Arts & Crafts Guild and the Atalaya Arts and Crafts Show. She has exhibited, taught and lectured at galleries, museums and universities throughout South Carolina and has work on permanent exhibit at Studio 151 in Charleston, as well as the Howard Gallery and the Franklin G. Burroughs-Simeon B. Chapin Art Museum in Myrtle Beach. “She’s the most hard-working artist I know,” says Powers. “She has exceeded her aptitude—and I mean that as the highest compliment. Having her for not years but decades as a student, I saw the whole transition firsthand.”

In addition to her endurance as a prolific and time-honored artist, Dugan has also demonstrated resourcefulness in her choice of media. When a car accident left her in the hospital and unable to paint about 14 years ago, she began working with paper to create collages. That diversion has transformed into another entire dimension of her artwork, as she now works exclusively in the paper collage media, using origami, rice and mulberry paper to create collages, many tinged with Asian themes and subject matters.

Still working six hours a day, Dugan crafts collages in her home studio surrounded by bookcases filled with notebooks. Each notebook contains meticulously recorded details and photos of each of the more than 2,000 paintings and 100 collages she has created.

“I overdo it, but I like to keep good records,” says Dugan. It’s just another sign that this artist’s legacy will endure for generations.
Related articles: 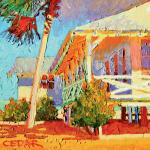 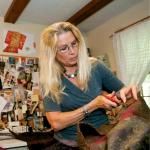