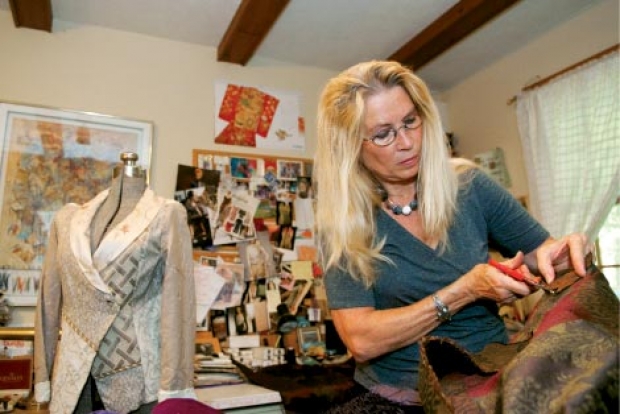 Many artists measure success by the range of places where their work can be viewed: museums, art galleries, professional publications or a client’s home.  But the nature of display is a bit different for Grand Strand artist Mimi Hay; not only do her works adorn the walls of museum shops and public spaces around the country, but they can also be seen walking down the street.

Hay creates wearable art that weaves the essence of nature and international cultures into silk, taffeta and cotton fabrics. Her custom clothing line is inspired by dimensions in nature, including light, texture and layers of material.  Most of her pieces incorporate an unexpected aesthetic, visual or tactile element, such as metals woven into the fabric, texture achieved through a unique spinning process, or colors blended using an ancient dying technique. Other items reflect a pictorial process or scene rooted in nature, such as water lilies, a saltwater marsh, or falling rain. Hay creates her art at her studio in Briarcliffe Acres and displays it at juried craft shows around the country, including the recent Gilman Arts and Crafts Festival, held in August at the Myrtle Beach Convention Center, and the Spoleto Festival USA, held in Charleston, where Hay’s work won Best in Show at the Fine Craft Arts Festival.

Hay’s current focus on wearable art grew out of an original interest in sewing and landscape quilting. As a child, Hay says, “My mother gave me sewing lessons. Most kids go to summer camp; I got sewing lessons.” In junior high, Hay started taking tailoring classes after school and “loved working with fine fabrics. I trained in that area and always made clothes for myself. I’ve been selling my pieces since I was 12 years old.” After her college years in Roanoke, Va., at Hollins College, Hay apprenticed with Ellen Kochansky, a nationally renowned fiber artist, in Clemson, where she “learned the trade of landscape quilting doing art quilting and collage work.” Before long, Hay branched out and began creating her own landscape wall pieces, landing commission work with hospitals, doctors’ offices, libraries and banks.

Japanese motifs rooted in her family heritage imbue much of Hay’s work, including her wall hangings, kimonos and clothing. Born in Okinawa, Hay moved to the United States when she was four, and the Japanese culture traveled with her family to Connecticut.

“I was influenced even as a child by Japanese aesthetics: woodblock prints, beautiful fabrics, pottery and furniture,” she says. “We lived in the kind of house that had kimonos hanging on the walls.” Hay’s own artistic leap from wall hangings to kimonos was prompted by a patron. “Sometimes clients guide you,” Hay explains. “One woman wanted a cherry blossom tree landscape, but she wanted it in kimono form. She wanted to hang it on a wall, but she wanted that shape—and now I have done 80 kimonos.”

Since moving to Myrtle Beach in 1995, Hay still creates one or two hangings or kimonos per year, but her main artistic emphasis has shifted to clothing. In addition to the traveling craft show circuit that takes her to 40 events per year, Hay is involved with the Franklin G. Burroughs-Simeon B. Chapin Art Museum, having worked with them to bring together the 2005 exhibition “The Adorning Arts: Art to Wear,” a celebration of handmade clothing, hats, shoes, and jewelry that included many of Mimi’s pieces.
Karen Olson, special projects coordinator at the museum, recalls from the exhibit that “Mimi’s pieces were undoubtedly some of the most stunning; her kimono-style jackets were a complex interplay of organic patterns and textures in shimmering colors …. these were truly one-of-a-kind exhibition works of breathtakingly beautiful art to wear.” The museum shop has carried Hay’s scarves for 15 years, and her pieces are also on display at the Cameron Art Museum in Wilmington, N.C.; the Morikami Museum and Japanese Gardens in Boca Raton, Fla.; the Piedmont Craftsmen Gallery in Winston-Salem, N.C.; and the South Carolina Artisans Center in Walterboro, S.C.
Hay’s craft show route takes her through the Washington, D.C./Philadelphia/New York corridor, in addition to other areas throughout the country, and she often reunites with clients year after year; in fact, several have become close friends. Hay enjoys the reward of knowing her clients value her work and enjoy making it a part of their daily life. And as for commission work—“the big pieces, the art pieces—it’s really thrilling to sell those because they’re kind of like children. It’s very exciting when someone comes to a show, sees them, and appreciates them enough to want them in their home.”

Photographs by Caroline Martin and courtesy of Mimi Hay