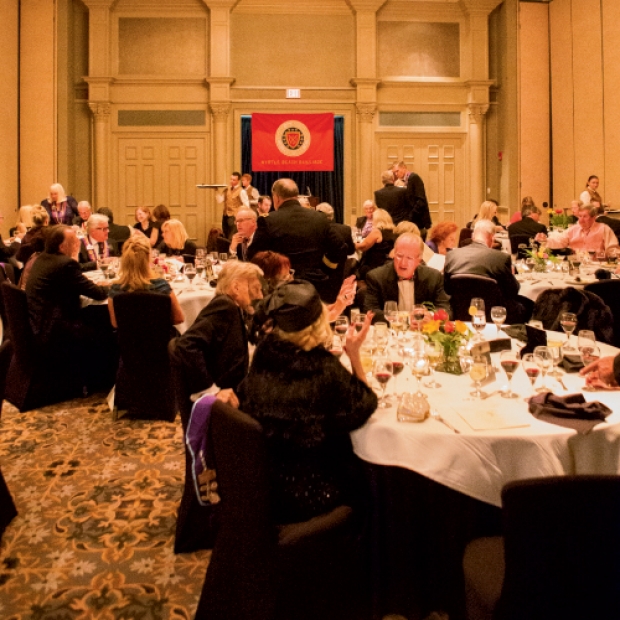 A black-tie affair swish with tuxes and evening gowns, the 60-or-so local members gathered to carry on the pride and tradition of Chaîne des Rôtisseurs, the world’s oldest international gastronomic society of record.

Founded in Paris in 1248, the mission of the society is to preserve “the camaraderie and pleasures of the table and to promote excellence in all areas of the hospitality arts.”

With Chaîne societies in more than 70 countries, many of the Myrtle Beach members proudly sported the official sash, sparkling with pins they’ve collected from other chapters, near and far.

Under the direction of Executive Chef Julien Lancrerot, ten chefs prepared each of ten classic and creative courses, paired with fine wines from both the old and new worlds.

Based on the practices of the old French royal guild of meat roasters, the Chaîne courses included quail, short ribs and even seared elk.

It was all and everything it promised to be.

Each plate was picture-perfect and just the right portion size to turn hope into reality that you would make it all the way to dessert. From hors d’oeuvres to gourmet cake and ice cream, there was a sense of excitement with each delectable course, preceded by the pouring of its paired wine partner. The company was charming. Conversation bubbled as effortlessly as the featured champagne.

Our round table of Chaîne-ers talked excitedly about the upcoming Italian Truffle and Hazelnut Dinner to be prepared by Executive Chef Carlo Zarri from the Piedmont Region of Italy and of the annual gala fundraiser in March for the Culinary Arts Department at Horry-Georgetown Technical College.

I was impressed to learn that this Chaîne chapter has raised more than $400,000 for scholarship and building programs at the college and is now awarding four annual medal and cash scholarships to students committed to a career in the culinary arts.

But to really get a taste of what the Confrerie de la Chaîne des Rôtisseurs is all about, follow us through the incredible Ten Toques menu, the chefs and the celebration of wines.

All About The Chaîne
Chaîne des Rôtisseurs is the world’s oldest international gastronomic society, founded in Paris in 1248. It is devoted to preserving the camaraderie and pleasures of the table and to promoting excellence in all areas of the hospitality arts.
Each year the society sponsors young chef and sommelier competitions that attract contestants from throughout the world, while the Chaîne Foundation provides scholarships for students in these fields.
Chaîne is based on the traditions and practices of the old French royal guild of meat roasters (hence, “rotisseurs”).
The Chaîne des Rôtisseurs has 135 chapters in the United States, including eight in the Carolinas. The membership roster includes culinary professionals and local residents who enjoy good food, fine wines and camaraderie.
Membership inquiries are encouraged and should be directed to Tony Hirsh at wahirsh@aol.com or (917) 612-6714.

By Chef Eric Masson, The Brentwood Restaurant & Wine Bistro, Chaîne Maitre Rôtisseur
Chef Masson graduated from three culinary schools at Brest, Noirmoutier and Paris. After working in top hotels and restaurants in France, England and the United States, he and his wife, Kim, founded The Brentwood in Little River in 2007. A winner of local “Top Chef” awards, Masson has performed in food shows with Guy Fieri, Paula Deen, Fabio Viviani and Aaron McCargo, Jr.
---------------------------------------

By Chef Tina Spaltro, The Dunes Golf and Beach Club
Pastry Chef Spaltro is a graduate of Horry-Georgetown Technical College who found her love of pastry and bread-making while working at Sea Island Inn (now known as the Island Vista Resort). She has won numerous local awards for her savory sweets and breads.

By Chef Mike McKinnon, The Cypress Room at Island Vista Resort
A true Myrtle Beach native, Chef McKinnon is a graduate of the Culinary Arts program at Horry-Georgetown Technical College. His father fostered his love of cooking at a very early age and he went on to hone his skills in some of the area’s finest restaurants.

By Chef James Clark, The Carolina Inn, Chapel Hill, N.C.
Chef Clark was gracious enough to return to the Grand Strand for the Ten Toques celebration. He has received several top recognitions in his career, including a 5 Star Award from the National Restaurant Science Association, and was featured in Bon Appetit for his cutting-edge cuisine.

By Chef Joseph Bonaparte, Executive Director, The Culinary Institute of Myrtle Beach, Horry-Georgetown Technical College, Chaîne Maitre Rôtisseur
Chef Bonaparte holds a Master of Italian Cooking diploma. He has cooked and traveled his way through the United States, Italy, France and Thailand. An award-winning chef and instructor, Bonaparte studied at the University of Houston, the California Culinary Academy and ITALCOOK.

By Chef Tina Spaltro, The Dunes Golf and Beach Club

In a wide, heavy-bottom pot, heat enough olive oil to sweat the onion, shallots and garlic. Add in the butternut squash and allow it to sweat over low heat. Add in the white wine and curry powder. Reduce to half the volume.

Add in the vegetable and chicken broth. Bring the liquid to a boil and then turn down the heat. When the squash is fully cooked, puree the mixture in a blender.

Pour the puree back into a sauce pot, add the coconut milk and simmer until thick. Season to taste with salt and pepper. If the soup is too thick, add more broth to desired consistency. 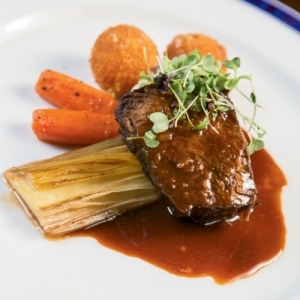 When browned, remove the ribs and reserve. Discard the olive oil from the pan and wipe clean.

Add the rest of the fresh olive oil to the pan and heat again to smoking point.  Add the celery, carrots, onions and garlic cloves to pan and lightly caramelize. Add in tomato paste, stir and cook mixture for 2 minutes.

Deglaze the pan with the orange halves and reduce to dry.

Add wine and reduce down to the consistency of syrup. Then, add in the bouquet garni, chicken stock and demi-glace. Add short ribs back into this braising liquid and bring to a simmer.

Place pan, covered, in a preheated 250-degree oven and cook for 6 hours.

Meanwhile, strain liquid and skim off all fat and impurities. Serve short ribs with braising liquid. 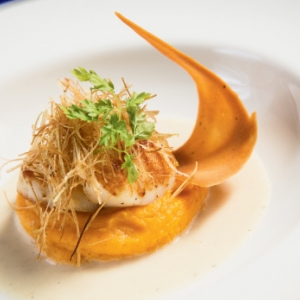 For the scallops:
Place scallops on waxed paper and season on both sides with salt and pepper.

Heat the olive oil in a sauté pan on high heat. Gently and carefully, place scallops in hot oil. Sear on one side for 1–2 minutes or until the outside is crisp. Flip to the other side and repeat.

When fully cooked (brown and crisp on both sides), transfer scallops onto a plate.

Heat the olive oil in a medium sauce pan, over medium heat. Add in the minced onion, minced fennel and garlic and let it sweat. When translucent and tender, add in the white wine and let it reduce to half its volume.

Then add the broth, fennel seeds, thyme, orange zest and cover. Cook on low heat for about 30 minutes or until the fennel is fully cooked.

Pour off the liquid and set aside. Put the fennel into a blender and puree while adding back one cup of the liquid. Puree until smooth. Add in more broth for a thinner consistency.

Pass the sauce through a strainer into a sauce pan. Add the cream and place back on the stove and continue to reduce the sauce to desired consistency.

For the sweet potatoe puree:
Preheat oven to 400 degrees. Prick potatoes and place them onto a foil-lined baking sheet on middle rack for about 1 1/2 hours or until very soft. Set the potatoes aside until completely cool.

In the meantime, place the heavy cream and vanilla into a saucepan and reduce the cream to half its volume or until thick and creamy. Set aside.

Scoop out the flesh of the cooled potatoes and place into a food processor. Add in the vanilla cream. Puree the potatoes until smooth and creamy in consistency. Add salt and pepper to taste. 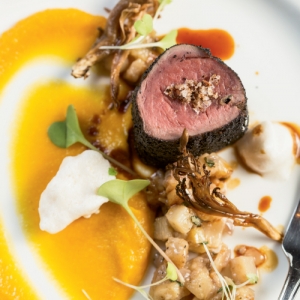 Heat a cast-iron skillet and season the tenderloins with salt and pepper.

Add the olive oil to the skillet and, once it is very hot, add the whole garlic cloves and tenderloins. Sear for 2 minutes on one side. Turn to other side and sear for another 2 minutes. Add the thyme to the pan and the stick of butter and turn the heat down.

When the butter begins to foam, start basting the tenderloins, turning often, for 2 more minutes.

Remove the elk and allow it to rest for 4 minutes before slicing.

For the Butternut Squash Puree:

In a heavy bottom pot, heat the olive oil. Add the shallots and garlic and cook until soft. Then add the cut squash, vegetable stock and heavy cream. Allow it to simmer until the squash is fork tender, but not mushy.

Skim out the squash onto a cookie sheet and place into a 350-degree oven to dry for 12–15 minutes or until it stops steaming. Continue to reduce the cooking liquid down to 2 cups.

Remove the squash from the oven and transfer to a blender. Add the five-spice powder and reduced cooking liquid. Puree. Season with salt and pepper to taste. 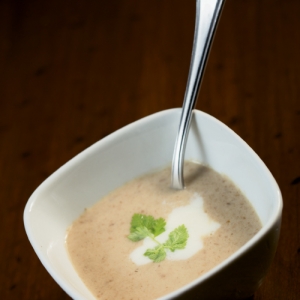 Clean mushrooms by wiping them with a dry paper towel. Do not wash them. Chop cleaned mushrooms.

Melt the butter in a pot and add the diced shallots. Add in the chopped mushrooms. Let it all simmer on low heat for 10 to 15 minutes, until ingredients are soft. Add a pinch of salt.

In another pot, toast the peppercorns until golden (do not let them burn). When golden, add in the chicken broth and bring to a boil.

Run through a sieve to remove the peppercorns. Pour the broth over the mushrooms. Cook over low heat for 15 minutes. Add the heavy cream and let simmer for another 5 minutes.

Season with salt and pepper to taste. Blend until smooth.