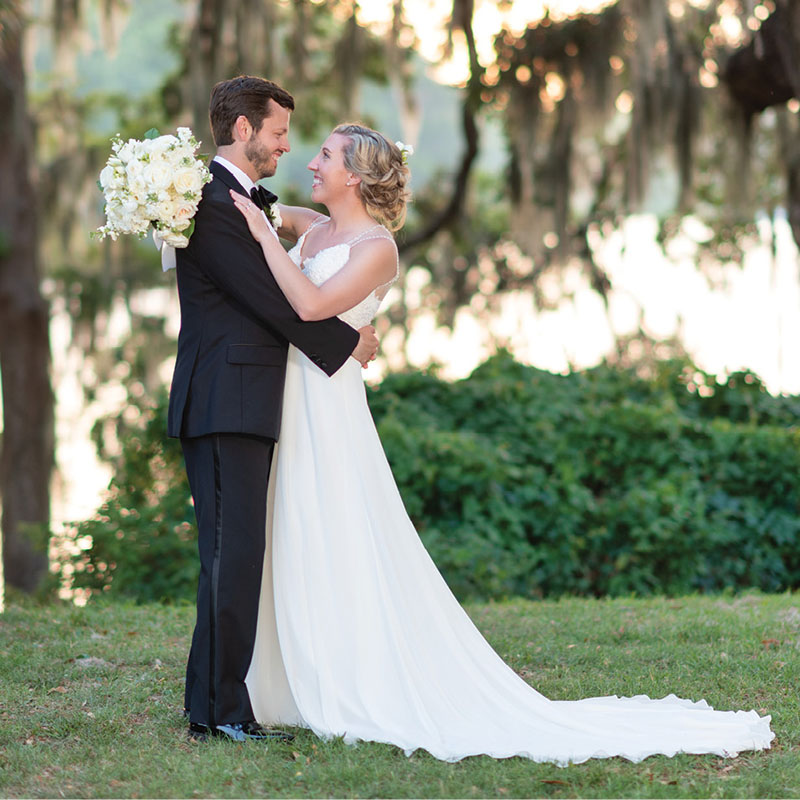 Symmes and Brian met playing tennis when he was on the court beside her. During a Memorial Day weekend at the beach with family and friends, Brian was acting anxious and asked Symmes multiple times to go out for a walk with him. She finally agreed, and he proposed on the Inlet Point boardwalk at sunset. Pawleys Island has always been a special place to the bride since she has been vacationing there with her family since right after she was born. The May ceremony was held at the Pawleys Island Community Church Chapel. It was traditional and beautiful and featured Southern flowers. Red (Symmes’ favorite color even before she became a Georgia Bulldog) was prominent throughout. Brian, a Kentucky Wildcat, included blue koozies at the reception, which also helped add a little patriotic flair to the Memorial Day weekend. White and green flowers were used in the chapel, with more color at the reception, which was held at Wachesaw Plantation Club. At the ceremony, the bride carried a bouquet of creamy white flowers. Each reception table featured an arrangement of roses, hydrangeas, peonies and lilies, along with tea lights or floating candles. The Waccamaw River served as a beautiful backdrop, with live oaks and hanging moss. Guests were offered flip flops in grass baskets, since many remained for a beach vacation after the destination big day. Brian’s most anticipated moment was waiting to see his bride walk down the aisle. Symmes’ favorite part of the big day was at the reception, sitting in Adirondack chairs at sunset.