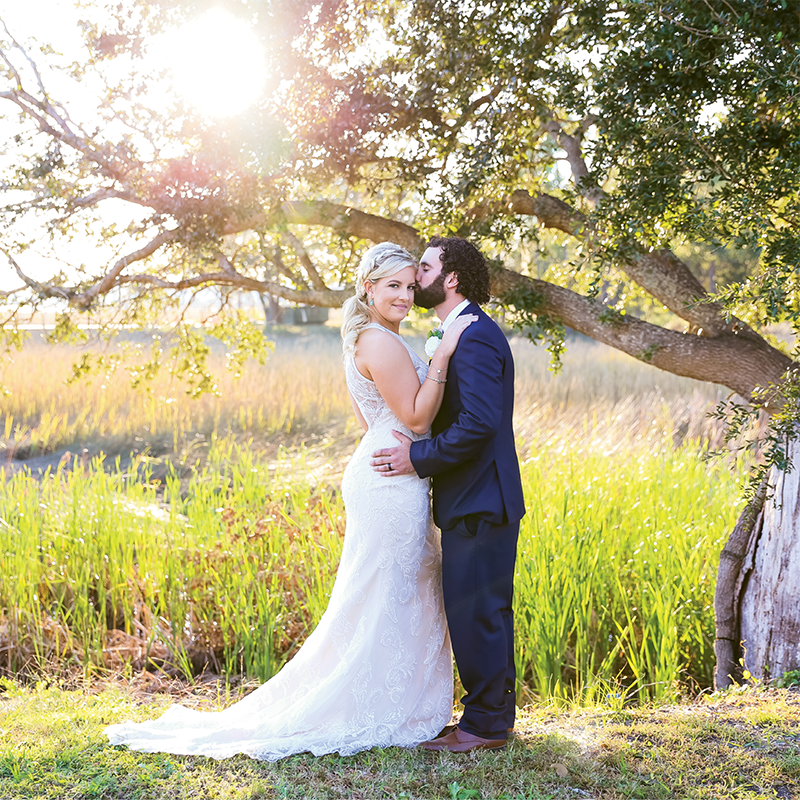 Nate and Sammy’s sister briefly “dated” in sixth grade, which consisted of texting without speaking in person. Their families have always known each other, and the pair reconnected after a Jet Ski ride one Memorial Day weekend. The moment he threw her off on purpose, she knew he was the one. They dated for six and half years, part of which was long distance while Sammy attended USC. They visited each other and took trips, including spending time in Cabo. Nate always joked that they would never get married, so Sammy was blown away when he popped the question on a trip to Punta Cana. They decided to get their photos taken on the beach at sunset. As they posed, Sammy was thinking about how hungry she was. That was quickly forgotten when Nate got down on one knee. Neither wanted a summer or winter date, and with three collegiate athlete siblings between them, spring was out. The weekend before Thanksgiving worked perfectly. Nate found a unique venue—Crab Catchers. The restaurant wanted them to be the first professional wedding held on-site and transformed the property into a gorgeous venue. The ceremony overlooked the waterway and a reception tent was set up in the parking lot. There were 11 bridesmaids and groomsmen, as well as three maids of honor, two matrons of honor, two flower girls and two ring bearers. There were many personal details, from Florida Georgia Line music incorporated to their Hispanic officiant starting the ceremony in Spanish to confuse guests and make them laugh. The theme of the day was country rustic, with rose gold and navy blue. The reception was a total blast with good music, a photo booth, amazing food cooked on-site, flowing drinks and lots of love from friends and family. The pair lives in Little River with their two beautiful girls—chocolate labs Bayley and Huxley.