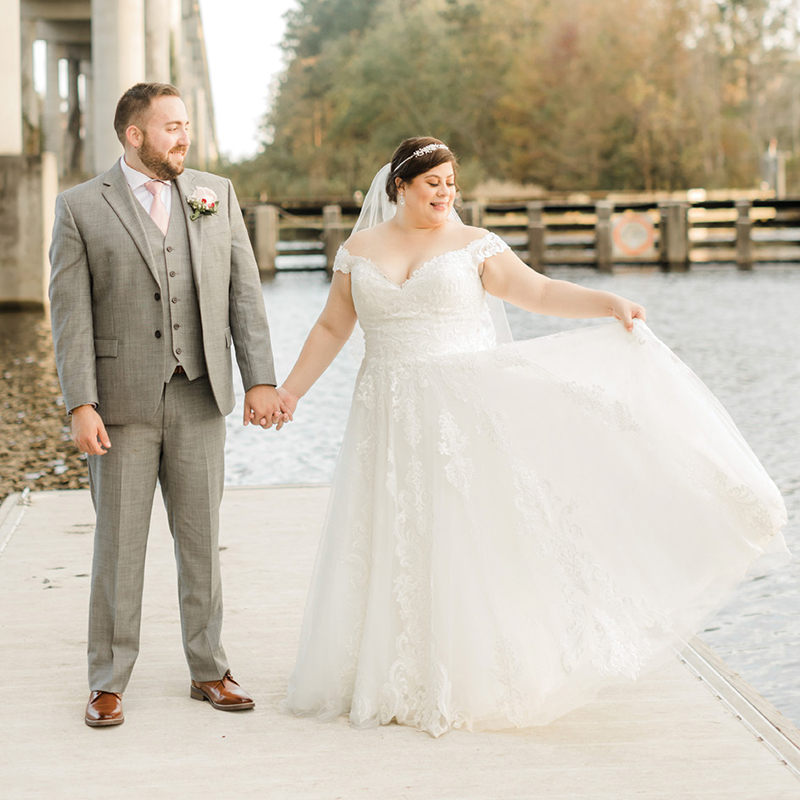 Paula and Dyllon met at Medieval Times. They started out as friends and then something in the air—or sangria—brought them together as more and they have been inseparable ever since. After four years together, on the day after her birthday, Dyllon took Paula to a farm in North Carolina to see rescued animals. Since she is an animal lover, it was a perfect present. Her mom joined the pair, and Dyllon said he had found a cool hotel with a rooftop area for lunch. When they arrived for the meal, Paula was surprised to see Dyllon’s mom, sister and brother there. Then Dyllon got down on one knee, with Paula’s family from Colombia, South America, watching via Zoom. The bride said “yes” to the first dress she tried on and the bridesmaids wore light pink, inspired by Paula’s favorite color. The groom and groomsmen donned light grey suits with pink ties. Growing up, Paula was a huge fan of the Twilight series, and Edward and Bella’s big day was an inspiration. The ceremony was held outdoors under a beautiful tree at the Cooper House. It had rained all week up until the wedding day, which turned out to have beautiful weather. The decor included baby’s breath, flowing candles, white linens and mauve napkins for a simple and rustic look. Signature drinks were named after beloved pets and the yellow cake featured one layer with raspberry filing and one with chocolate. Since the bride’s family could not travel due to the pandemic, they were able to watch the wedding via Zoom from South America. Paula and Dyllon live in Myrtle Beach and plan to eventually relocate to the Sunshine State.