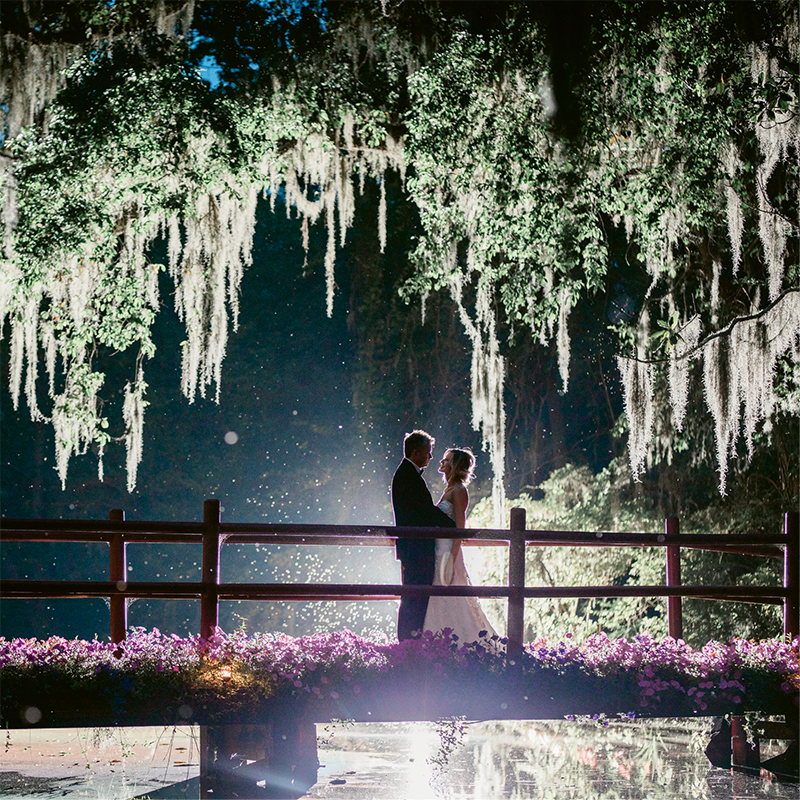 It seems unlikely that Jon, who was born in North Dakota, and Olga, from Minsk, Belarus, would cross paths. But luckily for them, they were introduced by Lori Church, Olga’s former boss at Coastal Carolina University and Jon’s good friend from Leadership Grand Strand. After two years together, the couple headed to 21 Main Prime Steakhouse to celebrate their anniversary. What Olga didn’t know was that Jon’s brother, sister, brother-in-law and parents were behind the scenes putting together a perfect proposal site on the beach. Rose petals were placed in the shape of a big heart, a bottle of champagne was chilling and the family waited for the pair to arrive. Jon told Olga they had to meet his family by the pool for a celebratory drink, but instead they headed out to the beach, where he proposed. The wedding took place at Magnolia Plantation and Gardens in Charleston. The ceremony was held on the lawn overlooking the Ashley River and surrounded by breathtaking oak trees, followed by an indoor reception at the conservatory venue. The theme for the day was shabby chic and featured white florals with touches of greenery and blush, soft pastels, warm creams, candles and amber lighting. The feel was of timeless elegance and the utmost sophistication. Jon’s brother, who was to be his best man, lost his battle to Cystic Fibrosis a few months before the wedding. The couple had a customized lantern and vase with purple flowers (the color that represents Cystic Fibrosis) on a pedestal right where the groomsmen lined up. Jon knew in his heart his brother was there in spirit, and that detail was most special to the couple. They donated all of their wedding flowers to MUSC patients, doctors and nurses in Jon’s brother’s memory. Olga and Jon live in Myrtle Beach with their maltipoo puppy, Roxy.

Photo by One Life Photography