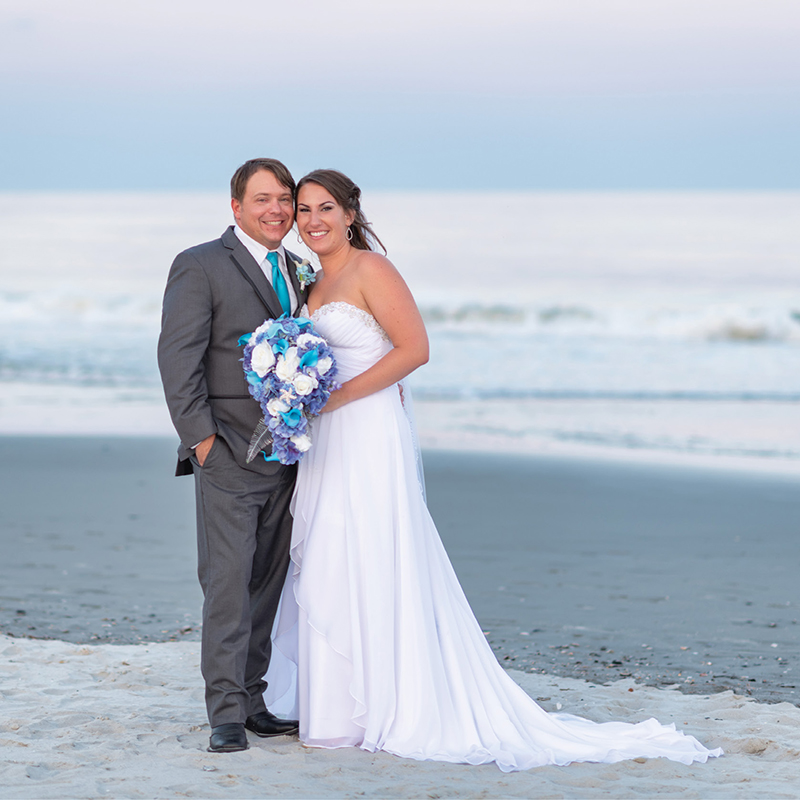 Melanie and Larry met randomly in Florida. He was there for training and she was on a trip with a couple of friends. They happened to live about four hours away from each other at the time, so they dated long distance for three years since Melanie was still in school. About a year and a half into their relationship, Melanie was finishing up her PT degree in St. Louis and Larry came to visit for the weekend. They had planned to go to the top of the St. Louis Arch, and this is where Larry popped the question. The wedding was held at the Ocean Club at Grande Dunes, with the ocean inspiring the big day. The couple wrote their own vows for the ceremony. Melanie’s dress was perfect for a summer beach wedding. The simple but beautiful strapless gown featured just enough beading at the top and was lightweight and flowy. David wore a dark gray tux, with the groomsmen in lighter gray with blue ties to match the bridesmaids’ dresses. The colors were Malibu blue and silver and the bride and her mother did a lot of DIY, including the centerpieces. The couple opted to keep the decor fairly simple since the venue was so beautiful on its own. A friend of the bride who is a great artist wrote some of the signs for the various tables. One of Melanie’s favorite elements were the custom M&Ms with the pair’s names and wedding date—some even featured a picture of the couple. Larry also shared a special dance with his daughter, Lola.