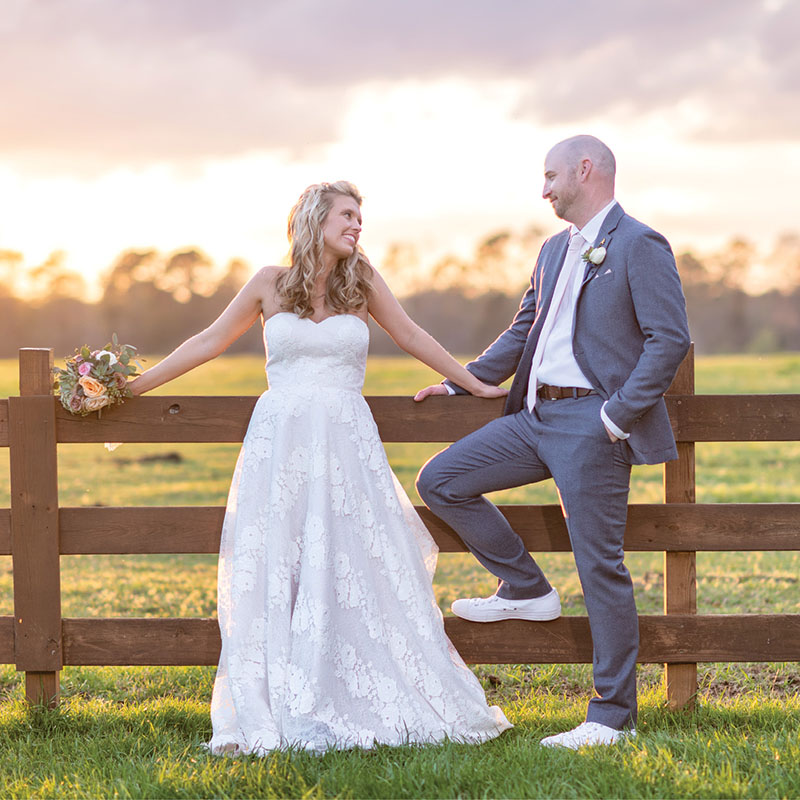 Jennifer and Matt met on the dance floor on St. Patrick’s Day. He asked her to dance and they hit it off right away, becoming inseparable in the following months. But when Matt was given the chance to move to California to pursue his dreams, they both knew he had to go. They kept in touch for a year or two—through emails and AOL instant messenger—but eventually fell out of contact. Fast forward 18 years. After searching on social media, Matt found Jennifer via LinkedIn. They began messaging, which turned to texting, then to calls, then to multiple cross-country trips. Matt proposed in Charleston and the couple planned their wedding for the same week they met 20 years earlier. The Wildhorse at Parker Farms big day was initially planned for over 100 guests. With COVID-19 looming, things were looking questionable. By the time the wedding happened, just very close family and a few friends were able to attend due to travel restrictions and social distancing. The couple didn’t let this stop their big day from being rustic and whimsical, with a touch of understated elegance. The color palette included blushing pink, sage green, light gray and slate blue. Flowers played an important role in the wedding, with mostly pink and white roses, purple and green succulents and eucalyptus leaves. Tables were named after special places like the Diamond Mine (where they couple met) and The Waterfront (where Matt proposed). The men wore AIM lapel pins, since that was how the couple kept in touch back in the day. Jennifer also hand-painted a wooden mailbox to resemble the AOL mailbox, which was used as a card box. Matt wore a slate blue suit with a skinny pink tie, with the bridesmaids in blushing pink dresses. Jennifer found the dress in the very first one she tried on. The couple’s special day was amazing despite the extenuating circumstances.