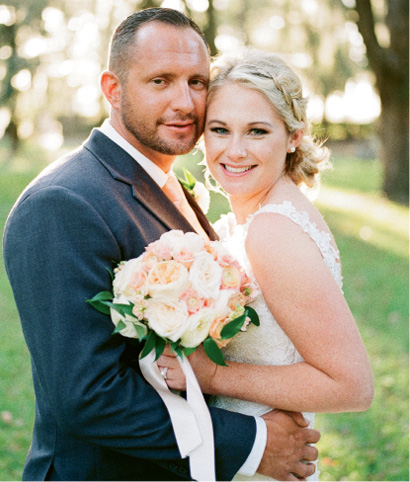 The pair met while Jeremy was in Myrtle Beach for a family reunion. While she and her friend Nicole finishing up dinner, Emily noticed Jeremy when he sat down at the table across from them. They stayed for almost two hours trying to get his attention until eventually his cousin called over to their table and asked if they would stay if Jeremy would by them a drink. They spent the rest of the night hanging out and had their first “official” date at Carolina Roadhouse the next day. The couple celebrated their two-year anniversary with a cruise. Although Jeremy hates having his picture taken, he agreed to on formal night. After a few photos, Jeremy asked the photographer to take a few more, and the next thing Emily knew he was down on one knee. The ceremony was held at Litchfield Plantation and had the look and feel of a classic Southern wedding. The pair was married under the live oaks and had navy and coral incorporated throughout the decor. The bride had her wedding date stitched into her dress. The small affair was intimate, with lights strung in the trees and a menu of Southern staples like pulled pork BBQ, collard greens and mac and cheese with a Moscow Mule serving as the signature drink. Emily and Jeremy live in Mooresville, North Carolina.