Why We Love the Grand Strand

Locals know there’s something special about this place we call home. It’s what lures newcomers, and what keeps natives from living anywhere else. Read on to find the reasons why we find the Strand so Grand. 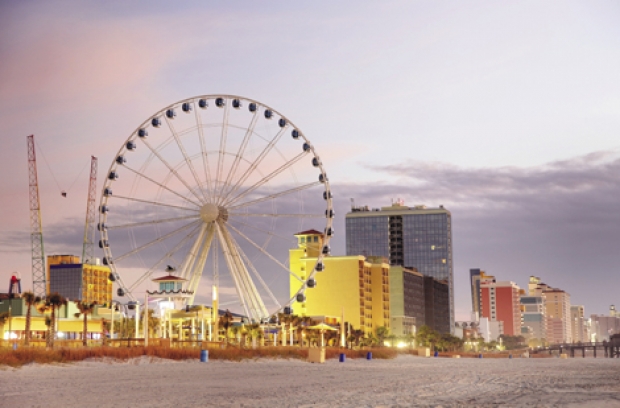 Monday After the Masters
Hootie and the Blowfish could have picked any town to host its annual golf tournament and related festivities. In fact, the tournament, now in its eighteenth year, had been held in Columbia and Charleston before it moved here in 2003. But the group decided that the Grand Strand was the place to be. With the Dye Course at Barefoot Resort and the House of Blues, what’s not to love? You can catch all of the golf action on Monday, April 9. Go to www.hootiegolf.com for details.—JH

It’s the People
I was reluctant to move to the Grand Strand because I thought it was just a tourist area with no real small-town feel. What I found instead was a wonderful small town, or actually a series of small towns that just happen to have 13 million visitors per year. All of the people who live here are really friendly. I still haven’t figured out if people are nice because they work in a tourist area and have to be, or if it is because very few people are actually from here so they have to make friends fast when they move here, or if it is because the people who grew up here are just so welcoming that after a year or two you feel like a native. No matter what it is, the people of the Grand Strand make it a great place to live.—MJR

A Parade at Sea

Murrells Inlet throws its Fourth of July parade onto the water at high tide. Boats as floats? Yes, a full array—from kayaks to yachts—all decorated in their red, white and blue best. Boaters are armed with dance moves, hot bikinis, patriotic music and water launchers. Spectators have a cold beverage and camera in-hand. You can’t get more all-American than that!—AM

The Beach
There’s no doubt that the No. 1 Grand Strand attraction is the natural wonders and beauty of our Atlantic shoreline.  Thousands of sunscreen-slicked visitors flock to the beach all summer long to tan, swim, throw around a Frisbee, walk alongside the surf and breathe in the mood-lifting ions with every break of a swell. When the crowds and humidity leave the strand, a Fall walk on the beach can be a magical experience. Sunlight seems to dance across the water, while seagulls and sandpipers hold squawking conventions in the chilly mist.  And if you’re lucky, you’ll be there when pods of porpoises make a winter visit to feed on schools of fish, rolling in and out of the surf just beyond the foamy fingers of a spent wave.—DM

Warm Holidays
We usually have beautiful weather during the holidays and for about a week after New Year’s. What better way to burn off that turkey or ham dinner than a walk on the beach?
Top-notch, holiday-themed shows headline live theaters and you won’t mind shopping the open-air outlet malls. And consider the luxury of being able to have morning coffee on a sunny porch in December and January! There might be a winter nip in the air, but you can actually catch a base tan.—DM

It’s Child’s Play Here
All the beach is a playground. I can’t tell you how rich in kid-friendly resources Myrtle Beach is for families. Well, yes I can. (These are daytrip destinations for most folks, but not locals like us!) Outdoors: Myrtle Beach and Huntington Beach state parks packed with educational touch-and-feel maritime activities; pier fishing; pirate ship outings in Georgetown; Brookgreen Gardens’ animal safari and butterfly museum; waterslides; the Waccatee Zoo; Broadway at the Beach Pavilion Amusement Park. Indoors: Planetarium at Sunset Beach; Ripley’s Aquarium; Myrtle Beach Art Museum; Children’s Museum of SC … Plus a wealth of libraries, arcades and bowling allies, malls and festivals year-round. Oh, and we have a giant 60-mile sandbox!—AM

Marshwalk
There’s bar hopping metropolitan-style, then there’s the Marshwalk way. Once you’ve lounged in a hammock in flip-flops, looking up at the stars and the glistening Inlet with cocktails and friends close at hand, you’ll know why this is a bar hopping hotspot. The waterfront boardwalk connects some of the best restaurants in Myrtle Beach, starting with Bovine’s and ending with Spud’s Waterfront Dining on the south end, with funky names like Creek Ratz, Drunken Jack’s, Bubba’s Love Shack and Wahoo’s in between. The names alone should drive you there; the fresh seafood, live music and killer views will keep you coming back for more.—AM

The Links
Where else can you find nearly 100 outstanding golf courses, and nearly all of them are open to the public? With local rates and membership discounts, playing golf is extremely affordable. And to top it off, we have some of the best places for shopping for golf accessories. Martin’s PGA Tour Superstore and Golf Dimensions have been around for decades and folks travel to the beach just to load up on special that they find at these local gems.—JH

Marathons, mud runs, triathlons and more
When I first moved here several years ago, I can only remember a handful of 5K or other races. Now we have several every season. The Myrtle Beach Marathon, the Myrtle Beach Triathlon and the Dirty Myrtle Mud Run were all held last year and promise to be bigger and better this year. Get involved in the Grand Strand running community by going to www.grandstrandrunner.com.—JH

Nightlife
We are charged with entertaining 13 million visitors annually, and we as residents benefit from the wide variety of nightlife offered on the Grand Strand. From symphonies at dusk, to low down beer-drinking country music honky-tonks, to dance clubs attracting all ages - it may be cliché, but there there’s truly something for everyone.  Coffee houses with acoustic entertainment, martini bars and marina restaurants—it’s all here for after the beach, after golf, or after a long day at work. You can enjoy a $2.50 house martini at a local’s happy hour, or a $13 version at an upscale club/restaurant. We’re as blue collar or well heeled as anyone might want.—PG

Sand Castles
Not everyone may be aware that we have had three national debates in Myrtle Beach for the last two Presidential elections. The idea that South Carolina has an effect on national politics is pretty exciting. We make the debates unique to the beach by building sand castles with each of the candidate’s faces on them. What better way to showcase the participants and still highlight our miles of beautiful beaches? Judging by the number of visitors to the sites and the national news coverage, others must love our sand castles, too.—MJR

Myrtle Beach Boardwalk
A boardwalk and a beach belong together like shrimp and grits. Growing up, my annual summer beach vacations were in Ocean City, Md., which boasted a mammoth set of boards, so I just expected the same sort of set to stretch for miles along the Myrtle Beach oceanfront. Not so until May 2010, when the City of Myrtle Beach unveiled its Boardwalk and Promenade, thankfully resuscitating a downtown that was stagnant and struggling for breath with its outdated facade. It’s like a new street was laid down. The boardwalk from Fourteenth to Second avenues North (and expanding) has stunning woodwork design, pretty-plush landscaping and refreshing ocean breezes. Plus, it has given a new breath of life to oceanfront cafes, boutiques and festivals on the naked lot that once housed the Pavilion—and given birth to new attractions like the SkyWheel.—AM