After nearly a decade, this historic Georgetown property returns to the Parker family 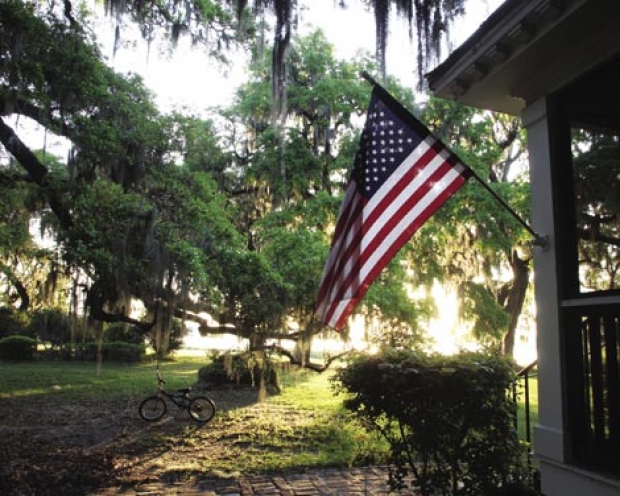 Throughout history, man has lusted after lands, near and far, in order to gain dominion, wealth, power or strategic positioning.

But sometimes this quest is very personal, powered by a longing so deep that it refuses to be requited until one’s feet are firmly reunited with that precious dirt.

This is something I learned from the historic and gracious Mansfield Plantation of Georgetown, where it would take nearly a century for its lost children to return home—a place where, in their hearts, they always knew they belonged.

For John Rutledge Parker and his wife, Sallie Middleton Jr., this moment happened when Mansfield was returned to the Parker family in 2004 after almost a century.

Mansfield and the Parkers first came together in 1841 when John’s great-great-grandfather, Dr. Francis S. Parker, traded Wedgefield Plantation to his mother-in-law for the deed to Mansfield.

It is believed that Dr. Parker and his wife, Mary Taylor Lance Parker, planted the 1.5-mile allee of live oaks leading to the main house. The trees now stand side-by-side like gigantic best friends, limbs entwined and knotty wrists dripping with bracelets of Spanish moss.

Although a First Honor Graduate of Charleston Medical College, Dr. Parker soon realized that profits from rice planting along the tidal banks on his new property far outweighed that of his medical practice. He used his scientific knowledge to increase rice production at Mansfield from 375,000 pounds in 1850 to more than one million pounds by 1860.

Mary and Francis would have nine children, which prompted them to expand the existing house, add a dining room wing and build a school house.

Before the Civil War, life was prosperous at the antebellum rice plantation. Dr. Parker was a vocal supporter of States’ Rights and signed the South Carolina Ordinance of Secession in 1860. When the war broke out, the three oldest Parker sons volunteered with the Confederacy and Francis served as Provost Marshall for Georgetown.

The house was set on fire in 1865 by an angry mob of slaves incited by federal troops. Dr. Francis died two years later, unable to adjust to the terms of the new times, some say of a broken heart. Mary conveyed Mansfield to her sons a year later. The Parker boys operated Mansfield as best they could, but like most rice plantations of the time, no slaves meant big labor problems. Louisiana and Arkansas began to outpace South Carolina’s production.

For reasons never discussed within the family, Mansfield was sold in 1912—soon after the death of John Parker’s great-grandfather, Arthur Middleton Parker—to a wealthy New York businessman, who would use it as a winter home and hunt club.

Mansfield was gone, forcing Arthur Middleton Parker II to move his family, including their nurse, Rebecca “Becky” Golden. They landed in Lake City so his wife could be near her invalid mother and her family’s hotel operation. Lake City was also a convenient location for Arthur’s regional cotton brokering business.

The family legacy at Mansfield was over, but Becky filled young John’s imagination, just as she had done with his father, Arthur Middleton Parker III, with stories of her early life on the plantation. “Becky was a granddaughter to a slave, born around 1900 and raised in their cabin at Mansfield. … She cared for my aunt, my father, and then me. … I loved to sit beside her and listen to things she could remember that would bring a wide smile to her beautiful face.”

John Parker now lives in Asheville, N.C., and owns a successful car dealership, but it was in 1963 that he would have a chance encounter with Mansfield that would determine his unwavering thirst for his family plantation.
“It was a warm October afternoon and I was waterskiing down the Black River with friends. We noticed a dock that had a small sign that read ‘Mansfield.’ I was a teenager and felt such excitement. We glided down the narrow rice canal and reached a boat landing. It’s hard to describe, but from the moment I jumped off the boat and stepped on that soil, I vowed that if the opportunity ever presented itself, I would bring Mansfield back into the arms of the Parker family.

“I felt immediately at home and, even now, I get a warm, welcoming feeling when I go there. For some reason I love to get dirty there, digging in the dirt like so many before me. … My life was forever changed, as Mansfield was back [in the Parker family].”

And Parker’s possession of Mansfield would also change another life forever.

Martha Reed White was born on the property in 1955 in the largest of the six cabins, where she spent “the best childhood in the world.”

I met Martha as she fished the banks of the tidal pool, grinning from ear-to-ear as she showed off her early morning catch, snatching up a squirming spot tail bass from a bucket.

As if the comings and goings of B&Bers staying in the 1930s guest houses didn’t exist, we walked and talked for hours, her earthy voice and engaging smile revealing all that Mansfield was to her.

“My family lived in that cabin,” her long fingers pointing the way to one of the original slave quarters, now caving in, porch sagging to the ground. “The chauffeur lived in that one, the butler in that one and the Colonel’s daughter lived in that one after she fell off a horse in competition, broke her back and was paralyzed for the rest of her life.”

After World War II, Martha’s daddy returned home to Kingstree after serving in the Army. With no job or prospects, he walked to Georgetown looking for work and found his way up the oak lane to Mansfield.

Colonel R.L. and Charlotte Hope Binney Tyler Montgomery had purchased the property in 1931, restored the house and added an entire area devoted to their horses.

“The Colonel was riding around on horseback in full uniform as usual,” smiles Martha, “and here comes my daddy, fresh out of the Army. They talked a while and then the Colonel told him, ‘Go get your wife and bring her here, then grab a shovel and start in the horse barn.’”

Martha steps up and peers through the wooden shutter of what was the laundry house. “My mother and aunt ran the laundry for everyone at Mansfield. My kids tease me that I never dress up. But as a child we were always in starched collars so stiff you could slit your throat on them and creases so sharp in our pants you could hurt yourself. I’m so happy to be wrinkled up now.

“Summertime was the best time here, when the owners would go north and the whole place was ours … no shoes in the summer, our feet would be blistered from the hot sand. We’d fish, my brothers wrestled alligators, we had a baseball diamond. … Sometimes we’d cover ourselves with moss and, like Indians, we’d swing from tree to tree. … Daddy would curse raccoons for eating the biggest watermelons in the garden, but it was us, we scratched the rind with a fork to make it look like raccoon claws.”

Martha’s idyllic time at Mansfield came to a painful end when the property changed hands in 1970 to Mr. and Mrs. Wilbur Stevenson Smith. Covenants to the deed provided that all the residents in the cabins could live there until their deaths or until they chose to relocate.

According to Martha, the new ownership changed the way she lived, first by putting up a locked gate at the end of the laneway, then by allowing the movie crew that used the property in the film The Patriot to take down the fruit trees that came with each cabin. Martha and the other workers felt more restricted, without free reign over the property.

“I finally moved into Georgetown. We left everything we owned in the cabin.”

Martha shakes her head and looks wistfully at the tall grasses on the tidal bank where she used to play hide-and-seek. “I missed Mansfield every single day. I had been fishing here since I was three.”

When she learned that the Parkers had reclaimed the plantation, Martha decided to “take her chances, introduce herself and ask permission to fish again.”

“Mr. Parker and Miss Sallie told me I could come fish any time I wanted. … Miss Sallie loves to get out a recorder when I tell them my stories of living here and as you can tell, I love to run my mouth.”

Martha answers the ring of her flip phone, “I’m here at Mansfield … been fishing all morning … if home is where the heart is, I’m really home. You know I love this place. If that old cabin was fixed, I’d move back here tomorrow. Yes, I would.”

In hushed tones, those in the know about Mansfield claim that the restless spirits of past slaves have been quiet ever since the Parkers purchased the property.

It seems everyone is happy with the homecoming.

A plantation breakfast is served to guests every morning in the main dining room of the house, with its grand fireplace, silver service pieces, crafted mouldings and sprawling table that seats more than 16 people comfortably.
Guided tours are also available by appointment.