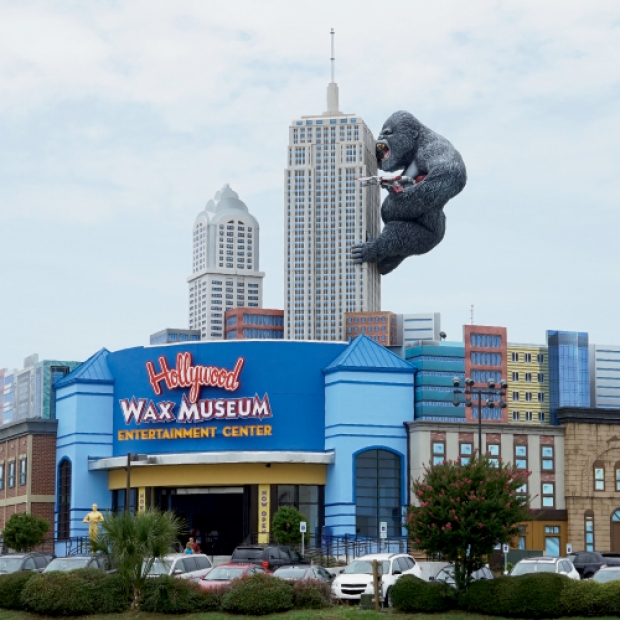 Over the course of several months earlier this year, locals and visitors watched curiously as the former NASCAR Café in Myrtle Beach was transformed. First came the faux New York City skyscrapers, and then “he” showed up.

The Hollywood Wax Museum, which opened June 14, first really grabbed our attention when a King Kong-esque creature, nicknamed “The Great Ape of Myrtle Beach,” first lay prone amidst a slew of construction equipment. Workman and cranes assembled his arms, legs and roaring head in stages, and then the giant ape, some 40 feet from head to toe, was hoisted atop a scaled-down Empire State Building facsimile, creating a new, hard-to-miss addition to the Myrtle Beach skyline.
The two-story, 30,000-square-foot attraction is the newest in the chain of four from Kuvera Attractions—the others are in Branson, Missouri, and Pigeon Forge, Tennessee, and the 1965 original in Hollywood. In addition to viewing and posing with 112 lifelike celebrities, guests will enjoy the interactive sets, Prop Vault, a plot-driven themed mirror maze (Hannah’s Maze of Mirrors), and the option to participate in a special effects-laden haunted Zombie apocalypse, called “Outbreak.”

Designed to entertain young and old, the Wax Museum’s convincing replicas are the real draw. From famous athletes to Hollywood A-listers such as Brad Pitt, Robert Downey Jr., and Julia Roberts, to pop culture icons such as Johnny Cash and Michael Jackson, it takes a large team of sculptors and technicians some three or four months to create each wax figure.

Ticket prices range from $16.95–$26.95 for adults, $7.95 for children 4–11, and those under 4 are free. The prices vary as guests may visit any one or all three of the main attractions (Wax Museum, Hannah’s Mirror Maze, Outbreak) each priced separately, or packaged together at a discount. Senior citizens are offered a discount as well.

Horry County, Georgetown County and Brunswick County residents will be admitted year round for 50 percent off of the regular ticket price—a move many locals hope may be adopted by other area attractions.