Time Was on Their Side

A couple whose nuptials surpassed months and miles 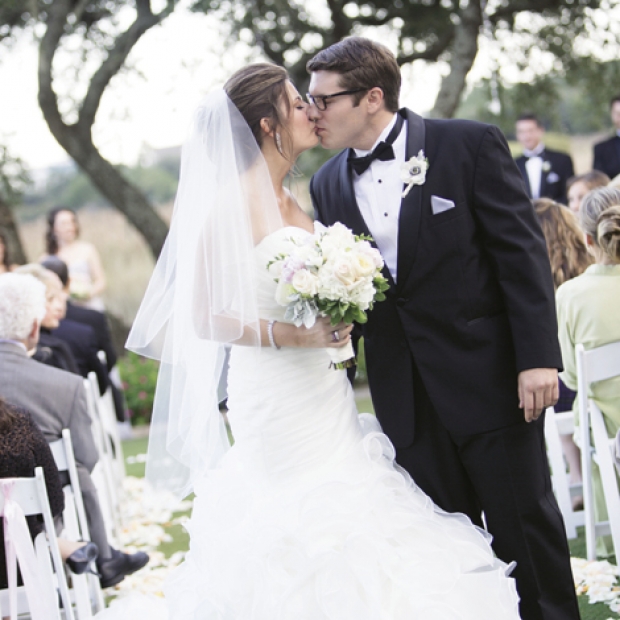 Time can either drive a wedge between two who have crossed paths or act as a bonding catalyst. And when love is involved, expect to not only be bound, but knocked off your feet and left a little breathless with a heart full of happiness.

Brittney Farish and Justin Jones dated for nine years before finally becoming Mr. and Mrs. Jones on October 12, 2013. As fellow students in Mrs. French’s art class in Socastee High School, the two went on their first date in 2003, followed by time and distance in colleges in Charleston and Columbia, law school and a return to their hometown.

“I know it sounds simple, but we just always enjoyed being around one another,” says Brittney. “We wanted to make sure we stayed together.”

Justin made that even clearer on a surprise getaway to Charleston, where the original plan was to propose to Brittney during a romantic horse-drawn carriage ride. But Mother Nature instead swept through the streets, putting a damper on Plan A. Enter Plan B, in which he got down on one knee under the shelter of the front porch of St. Phillips Church. Cue church bells and a resounding, “Yes!”

The bride-to-be didn’t waste time planning her special day, which was held outdoors on the circular lawn of the courtyard at DeBordieu Colony Clubhouse near Pawleys Island.

“I’d always envisioned my wedding to be classic and Southern—a warm feel,” says Brittney, an attorney in Myrtle Beach. “I guess Southern could go either the way of country or glamorous, but I went with the latter. Plus, we wanted our family from out of town to experience true Southern hospitality and flair.”

Flair was witnessed in the form of Southern coastal flora at its finest, with a lovely live oak altar and flowing orchids, all framed by gilded lettering from 1 Corinthians 13. The colors of the day were a sparkling duo of silver and gold amidst blush pink accents. A string trio strummed the ceremonial soundtrack.

Brittney’s gown was picturesque, featuring a cathedral-length train of organza ruffles and a veil adorned with Swarovski crystals that twinkled in the late afternoon sun. She carried a bouquet of ivory garden roses with blush pink peonies and anemones. Her “something old” and “something blue” was a patch of satin from her mother’s dress, embroidered in blue with the wedding date and couple’s names, then sewn into the skirt of Brittney’s gown. Her “something borrowed,” explained by Brittney’s mother, was a ring taken from her grandmother’s finger just before her walk down the aisle.

Old family Bibles were another set of “borrowed” contributions, upon which the ring bearers carried the rings. The Bibles were also decorated with silk flowers from the bride’s mother’s veil.

After the “I do’s,” the celebration continued inside the clubhouse, where cocktail hour served up Oysters Rockefeller, barbecue pork sliders and more Southern comforts. Dinner was a formal affair, complete with silver-draped tables topped with gold chargers and flatware and gold boxes filled with the bride and groom’s favorite chocolates in the shape of seashells. Entertainment followed into the night, with the dance floor bouncing to the beat of the band Tru Sol.

“It was such a special day,” says Brittney. “And I challenge brides to use every part of the planning as a reason to celebrate. I mean, include all of your wedding party, future in-laws, your family. … When my bridesmaids dresses came in, we had the fitting and had champagne, so it was fun instead of it feeling like a planning task.”

Brittney and Justin Jones, both 27, are still having fun living it up together in Murrells Inlet.