How a local entrepreneur beat the odds and turned improvisational comedy and a podcast into a career. 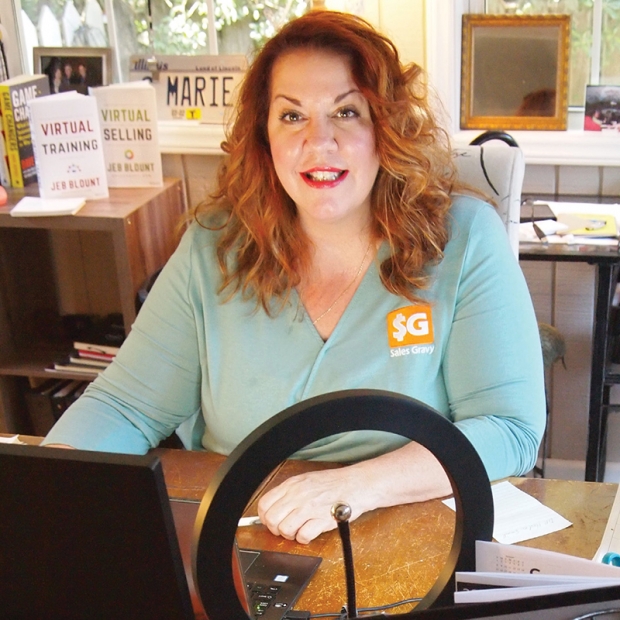 With fiery red hair and a personality to match, Gina Trimarco couldn’t know or even imagine her future when she landed in Myrtle Beach in 2007. She came to town with a strong background in marketing and improvisational theater (think, “Whose Line is it Anyway?”). Since first arriving, the native Chicagoan has endured a series of successes and setbacks, but ultimately persevered in a community she says, “Doesn’t always get what [she’s] trying to accomplish.”

As the recently named Director of Coaching Programs for Georgia-based Sales Gravy, a nationally known corporate sales training company, Trimarco works and podcasts from her studio in her Murrells Inlet home. The new job combines her entrepreneurial sensibilities with the backing of an established corporate sales training and coaching company. For Trimarco, it’s the best of all worlds, but getting there wasn’t easy. 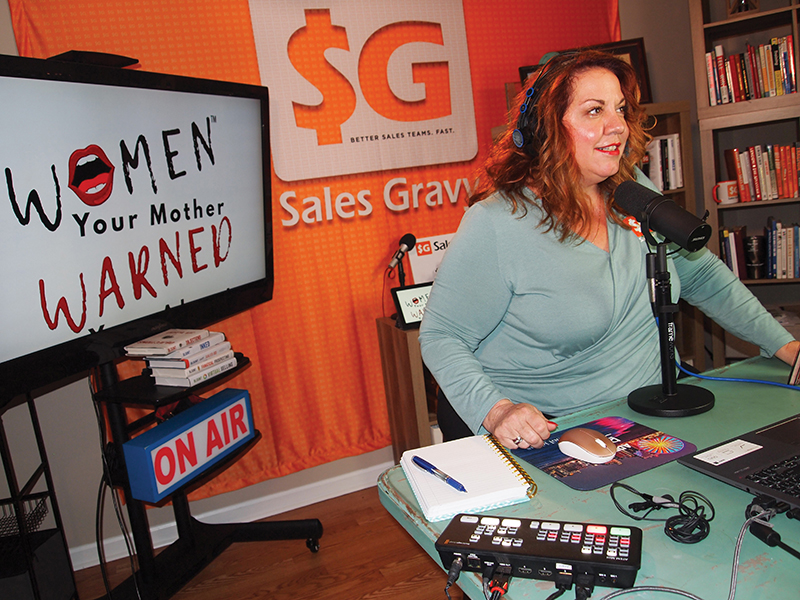 Corporate Sales Trainer Gina Trimarco telecommutes around the U.S. from her home office in Murrells Inlet.

In 2007, Trimarco accepted the position of general manager at the now defunct IMAX Theater, formerly at Broadway at the Beach. She took the job, not realizing the struggling company was about to close theaters in bulk around the U.S., including the Myrtle Beach theater less than two years later. She had trained at the famed Second City Theater in Chicago, home to countless A-list comedians, and while working for IMAX in Chicago and later in Myrtle Beach, didn’t realize how much her experience in improv would shape the next decade of her life.

After parting ways with IMAX and facing unemployment, Trimarco took the blow in stride, launching Carolina Improv and opening the Uptown Theatre in the Myrtle Beach Mall. In a dedicated multi-use black box-styled theater, her troupe of players (former local students of her improv classes) performed in ticketed shows for nearly 12 years, garnering top TripAdvisor reviews.

While Carolina Improv and the Theatre became self-sustaining, Trimarco eventually branched out into business and improv-based corporate training. She later started a business, Pivot 10, and a podcast, “Pivotal Leader,” where she interviewed CEOs and discussed the pitfalls and roads to success that her guests were uniquely qualified to discuss. 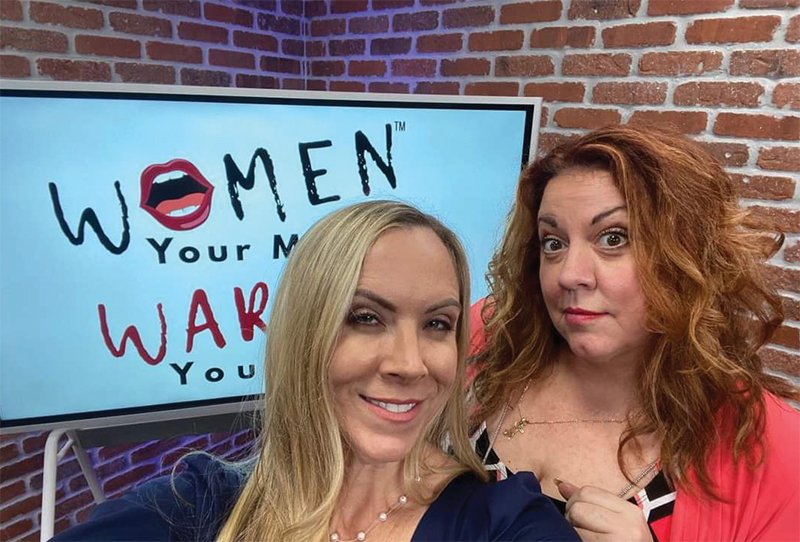 Rachel Pitts (left) and Trimarco partner in the video podcast “Women Your Mother Warned You About.”

In January 2019, Trimarco partnered with Rachel Pitts in a new podcast geared toward women in leadership and sales, called “Women Your Mother Warned You About.” Still new to podcasting, the team struggled through technical challenges and the profitability of trying to find sponsors and gain momentum. Through it all, there was a spark of something there. Then, a year later came the pandemic. Once again, Trimarco was faced with daunting challenges, a shuttered Uptown Theatre, and a new opportunity while the podcast was very slowly gaining steam. Podcasting is a 20-year-old medium that, like a radio show, presents topics of interest and interviews. Unlike terrestrial radio, a podcast may be downloaded or streamed when it’s convenient for the listener.

“I like to describe it as kind of a merger-acquisition,” she says. “I was doing improv-based corporate training, but the pandemic kind of put a hard stop to the work. I reached out to a competitor, Jeb Blount of Sales Gravy, and said, ‘You should hire me,’ and Jeb said ‘But you have your own business,’ and I said ‘Yes, but through the pandemic it’s sucking wind, and I have nothing coming in,’ and long story short, the timing was perfect. For the first time in 14 years I was going back to work and leaving self-employment behind.”

In October 2020, Trimarco signed the papers and began traveling back and forth between the Sales Gravy home office in Thomson, Georgia, and her home in Murrells Inlet.

“I’m an overnight success in 14 years,” she laughs, while preparing for an upcoming taping of the podcast. 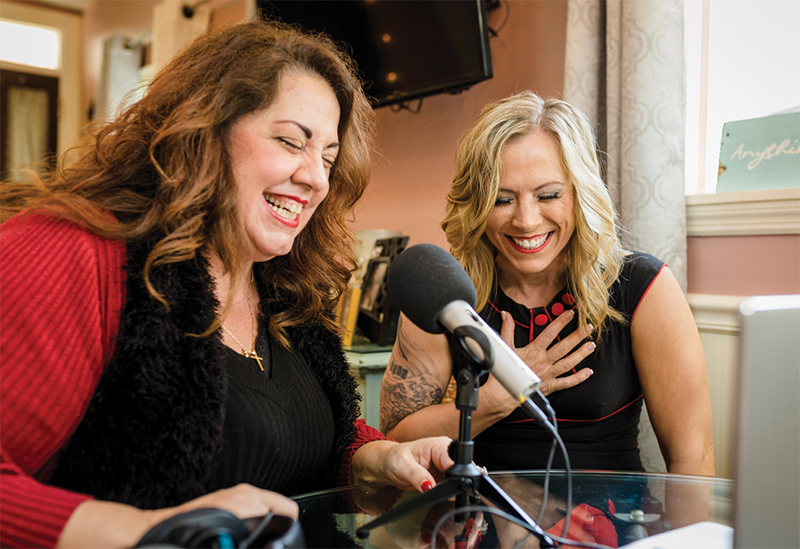 Trimarco and Pitts are pals on and off the microphone, and share lots of laughs.

Through a close friendship and partnership, Trimarco has taken great strides with Pitts, who has spent the past 10 years in real estate sales and mortgage work. Pitts, who also has a history in performance art—primarily dance—is also a body builder and fitness trainer. She, too, works for Sales Gravy in a coaching/training capacity.

“Rachel and I are the women your mother warned you about,” muses Trimarco, referencing the tongue-in-cheek title of the weekly podcast, which typically runs 50 minutes to an hour long each week. “We’re different in a community where many people don’t like different; we stand out in a crowd. There’s a fair amount of cattiness here, and there are some who don’t like or appreciate ‘different.’ I think Rachel agrees. She finally told herself, ‘I’m different, I stand out, that’s just who I am.’ And I feel the same way. We’re not going to feel bad about being different ever again. It’s how we attract the right kind of people to us.”

Not for the easily offended, the podcast is blunt, to the point, has plenty of colorful language, and is often off-the cuff.

“Women Your Mother Warned You About” airs once a week, each Thursday, but previous podcasts may be downloaded from www.womenyourmotherwarnedyouabout.com.

The podcast offers real-world tips for all salespeople. In a recent podcast Trimarco shared her secrets to overcoming the price objection when it comes to selling a coaching or training program.

“In the discovery phase, when the money question comes up and they cry poor, what I tell them is ‘this is not about, you don’t have money,” she says. “It’s about not having confidence that you’ll do the work.’ That’s my new go-to response, and the truth of it has an impact.”

Pitts and Trimarco good-naturedly tease their boss and sponsor, Jeb Blount. In a recent podcast they called him “The Overlord,” and “Kingpin.” As listeners, we’re let in on the fun, as the ladies’ filters are virtually non-existent, which makes for a sometimes surprising and always entertaining listen. At the beginning of each episode, Trimarco says, “time to put your big girl panties on!”

“Sure, it’s fun to do,” says Trimarco, aware of the performance and entertainment aspect of the show, “but it’s also serious work.

“Rachel and I have a love/hate relationship with the podcast,” she says, “because we run so hard, and then we think, ‘oh wow, it’s time to do another podcast,’ and it sometimes comes at inconvenient times for both of us, but once we’re into it, we love it.”

In spite of her schedule, Trimarco managed to garner the 2020 Myrtle Beach Area Chamber of Commerce Volunteer of the Year award, which was recently announced and celebrated. Trimarco also sits on the Technology Advisory Group Committee for the City of Myrtle Beach, and was instrumental in helping secure an HTC-funded co-work space in an historic building, set to open in the future.

“This is our third season of the podcast,” she says. “We’re much more spontaneous than in the past, so its very conversational and casual, and the feedback has been great. One of our regular listeners said, “I’m always listening for the nugget. There’s always a nugget in there, but you never know when it’s going to drop.’”

The success of the podcast is tracked through downloads, which Trimarco says have doubled since Sales Gravy began sponsoring and guiding the process.

“We’re not fabricated, or cult-like, like some of the superstars in the motivational speaker world,” says Trimarco. “I think Tony Robbins, for example, is [or was] a great cheerleader, but we’re unapologetically f--ked up. We don’t show a perfectionist veneer.” 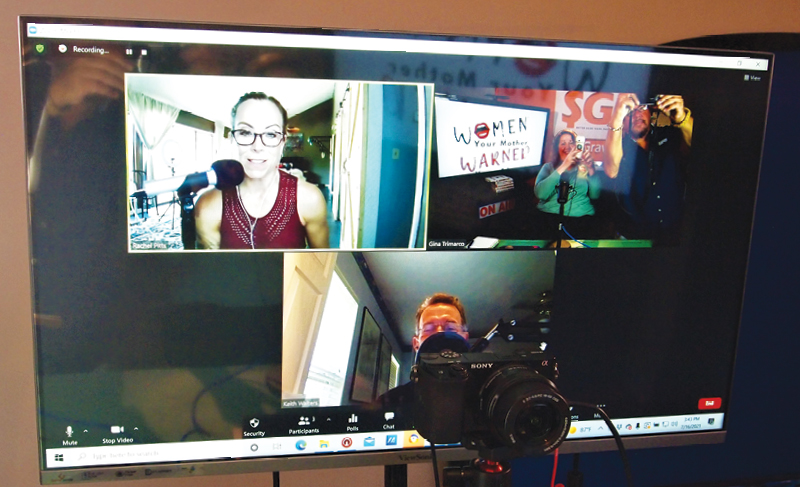 So, what about those who may lose confidence in a less than perfectly blow-dried finish?

“We don’t cater to those people,” answers Trimarco. “We service those clients who are like us: imperfect, who go through stages of the ‘imposter syndrome,’ but are always striving to be better, who don’t want a guru coach who says ‘do it my way.’ We strive to take you on a journey to where you want to go based on what works for you. We do help people improve their confidence, especially women. I regularly have women say ‘I want to be more like you,’ and I say, ‘No, you want to be more like you, but with more confidence.’ I’ve had guru coaches in the past, who were so rigid and opinionated, that I came to the realization, ‘just because it works for you, doesn’t mean it’s going to work for me.’

Trimarco has had to learn the considerable tech that goes hand-in-hand with not only a video podcast, but teleconferencing in a pandemic-saturated world, where face-to-face meetings are far less common.

The long-range plans, says Trimarco, are to take that concept and brand, and develop a series of leadership training and a series of books, based on The ‘Pivotal Leader’ title and the CEOs interviewed.

“When I made the choice to go to work for someone,” says Trimarco, “people asked me, ‘are you sure? That’s not the Gina I know,’ but others pointed out to me that all the entrepreneurial stuff I did–the theater, the corporate training, the coaching, the podcasts—all lead to this point. I’m doing so much better now than I did when I owned my own business, but I wouldn’t be where I am now without those earlier ventures.” 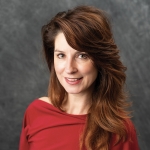 Sewing What You Reap

Donna Brin, owner of bFIVE40, fabricates sustainable, branded products for businesses and creates job opportunities for those with disabilities 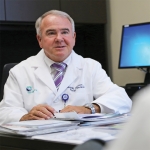 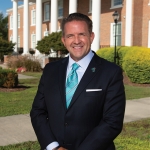