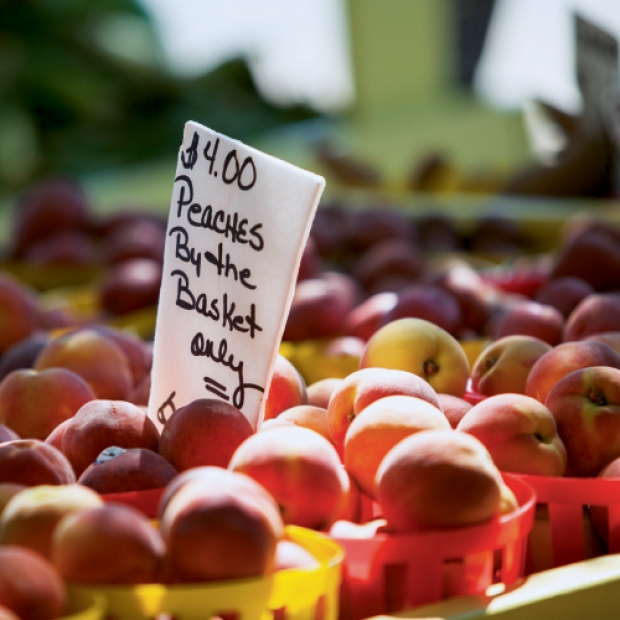 There are many ways to mark spring’s arrival along the Grand Strand—the wisteria blooms, the flounder begin biting in the creeks, the motorcycles thrum and buzz into Bike Week, the sunscreen and bug spray gets retrieved again from the closet.

But there are other sure signs announcing the end of winter—bright yellow signs, in fact, with hand-painted block letters that read, “Fresh Local Produce.” You see them peppered about the roadsides from Pawleys Island to Little River, these wooden structures where locals and tourists alike go to buy strawberries, tomatoes, okra, sweet potatoes, shrimp, peppers, honey, boiled peanuts, blueberries, peaches, squash, zucchini, cantaloupes and all other seasonal varieties.

It might be hard from a bird’s-eye view to see these places, tucked as they usually are in parking lots beside larger businesses. But once you step out of your car, often in 90-degree heat, and browse for a while under the shade, taking in the colors and the smells of the roadside stand’s offerings, you find it hard to go back to the over-priced and air-conditioned supermarket aisle.

Elsewhere in South Carolina you might see these stands scattered sporadically about the backroads and the countryside, but the Grand Strand’s unique blend of fertile farmlands and busy beach traffic make the area a ripe place to sell summer produce. Indeed, the UCLA area (Upper Conway, Lower Aynor) might very well be re-named the “Produce Corridor,” as more than a dozen roadside stands operate there on U.S. 501 alone.

But unlike their closest cousins—the farmer’s market, the specialty item store, the general store—roadside stands are ephemeral. They generally operate only from April until November, thus putting a premium on the fresh and the local, and in this way they imitate the crops they sell, which have brief windows of peak freshness and taste.

But like the farmers markets and the general stores (and unlike the mega supermarkets or online shopping), the great theme of a roadside stand is the joyful interaction between buyer and seller, and the individual stories that inevitably spring up during a transaction. This is what you hear echoed by almost every produce seller.

“You meet the most interesting people,” says Brenda Joan Smith, who grew up on a tobacco farm in Aynor, retired from the Postal Service, and has been running Mr. Potato Head Produce on U.S. 501 for eight years.

“I like the people. They ask me a lot of questions,” says Bill “The Tomato Man” King, who can be described as “The Don of South Strand Produce” since he’s been running stands in the Pawleys/Litchfield area for more than 31 years.

“I love the people. Everybody’s very nice,” says Barbara Burton of Barbara’s Produce, who, on a recent morning in May, was giddy that her son, a charter fishing captain in Murrells Inlet, had made the local news by catching a 49-pound cobia.

Indeed, conversations at a roadside stand usually begin with questions about selection—Seller: “Can I show you how to pick out the best watermelon?” (Answer:  “Thump it to see if it’s firm and look for the yellow belly.”); or Buyer: “Are these strawberries really sweet?” (Answer: “Yes, ma’am, try one for yourself.”)—and end up anywhere in the realm of human life, from gossip to weather, recipes to sports, and everything in between before concluding with “Have a nice day!” (Answer: “You, too!”).

And often enough you are lucky to hear the stories of how these humble and soft-spoken folks got started in the business in the first place. All of them started selling small, and they can usually remember the dates within the context of other life-changing events.

“I had my first child in 1982,” remembers Wanda Bellamy, of Bellamy Farms on S.C. 9 between Aynor and Longs. “And that summer we grew a little bit of watermelon and cantaloupe, and we started selling it in the front yard for six weeks. We had a little wagon with an honor system on it, and in the winter we sold collard greens.”

Today, Bellamy Farms sells produce out of a large warehouse-like building, and it is a certified Century Farm, meaning that it has been operating for more than 100 years. Once a tobacco farm, Bellamy Farms has evolved with the times and now grows its own Muscadine grapes, tomatoes and strawberries, among other seasonal varieties.

This year, however, the polar vortex and ice storms delayed many of the harvests in South Carolina, including the strawberries. Too much water can damage the crops and actually drive up prices. Furthermore, the delayed start does not mean that the season will last any longer. That is, if the strawberries are late two weeks, as they were this year, it doesn’t mean they will last an extra two weeks.

Yet not all roadside stand operators, like the Bellamys, grow their own produce. More often, vendors will buy what’s in season directly from a few local farms—mainly in Aynor—and often enough the rest of the produce will come from the State Farmer’s Market in Columbia, where some varieties arrive daily from other states.

The key to knowing what’s local (and thus what’s cheapest and tastes best) and what’s out-of-state is to know when to expect South Carolina crops. But the other way is simply to ask. Most vendors will happily point out what’s in season, and sometimes you learn little tips of the trade.
Ed Wisniewski, who works at Myrtle Beach Produce on 28th Avenue North, told me that Wednesdays or Thursday are usually best because that’s when vendors go to market and then come by the roadside stands in order to deliver their crops. And Don “The Tomato Man” King showed me how to shuck the first layer of cabbage so that you pay less per pound.

These kinds of open answers show you that most vendors are reputable and trustworthy, mainly because they have to be—selling produce, after all, is their livelihood.

And that means that one major appeal of owning a stand is that you are, for the most part, independent. You can take off when the business slows down or the weather is bad, you can set prices based on what you paid from the grower, you don’t have anybody except your customers and yourself telling you what to do. In the winter, you work on preparing for the next season by painting the stands and working with the farmers.

The appropriately named Dean Dew, who runs one of the southernmost stands on the “Produce Corridor,” worked at a plant in Mullins for 15 years before he was laid off, so the idea of operating his own stand was appealing.

“The thing about it is this,” he says. “Nobody can call me and tell me they can’t use me anymore.” And nowadays, he says, he can make a decent living and has done so at the same spot on U.S. 501 for 10 years.

These are the kinds of success stories that the Royals family might be dreaming about, for not six miles from Bellamy Farms you can find their Kendell’s Produce stand that, when I visited in late May, had only been in business for two weeks. But they seemed hopeful. Mother and daughter, Frankie and Carole Royals, were sitting beneath a shed, in front of a box fan and beside a simmering pot of boiled peanuts, thinking up new ideas for their stand, including more signs on S.C. 22 that would lead vacationers off the exit ramp.

They were still figuring a few things out (what hours they would keep, for instance), but they had the basic ingredients already—warm smiles, good tomatoes and boiled peanuts (the top sellers at most roadside stands until the peaches arrive in early June), and a few jars of Dutch Kettle jams and jellies.

Indeed, you’ll see these jars at almost every roadside stand along the Grand Strand. They come from the Amish market in Hamptonville, North Carolina—a four-hour drive north—and they are a popular item—along with local honey and spices from The Island Spice Company—that adds to the colors and self-production ethos of the roadside stand.

But some customers prefer to jelly and can and pickle their own fruits and vegetables, especially when they can visit a pick-your-own farm like Indigo Farms, which straddles the South Carolina/North Carolina state line on Hickman Road, just west of Calabash.

I took a visit there one cloudless and cool day in late May, pulling off of the shoulder and into the dirt parking lot beside a strawberry field, where a kind and soft-spoken man named Doug Gardiner greeted me from his perch beneath a wooden stall. Like many of the roadside stand operators I’d talked to—Brenda Joan Smith, Lyles Bellamy, Bill King—he’d grown up on a tobacco farm, albeit in Maryland, and he told me about how tobacco farmers were finding new hope in growing produce, and how the sandy loam in this area was good soil because it only needed to be disced rather than plowed.

Still, he says, “Farmers are tough. People think they’re getting rich, but they’re not. They work long, hard days just to try to make a living.”

The pick-your-own strawberry operation, however, was pretty relaxed. After handing me a white one-gallon Do It Best paint bucket, and instructing me to look for the good and ripe berries, I strolled lazily and stooped down in the field for 10 minutes, looking under the leaves and plucking what I thought were the best strawberries. The only two hard things about it were to quit humming “Strawberry Fields Forever” over and over in my head and not to violate the honor system by slipping a few berries into my mouth. (Although, judging from some of the half-bitten strawberries on the ground, I wasn’t the only guilty party.)

When I returned—with my fingers stained darkly red, and with about two dozen strawberries for a grand total of ninety-cents—Mr. Gardiner eyed my yield suspiciously. A couple behind me had brought in more than 10 pounds of the biggest, juiciest strawberries I’d ever seen, and Mr. Gardiner slipped down from his perch and went out and picked me a half-dozen more that looked like these.

“You gotta look under the leaves of the plant,” he said. “They’ll be hiding under there. They won’t be visible until you start looking.”
It was the kind of advice that encapsulates not just the fruit itself but the nature of roadside stands in their entirety. Too often overlooked or bypassed, roadside stands best represent the intersections of “foodways”—the paths human follow as they grow, sell, buy and cook food.

I, for one, ate my strawberries compulsively in the car, zigzagging as I did through the produce corridors of Aynor and Loris and Longs and Conway and Myrtle Beach, all the way back home to Murrells Inlet—knowing I’d return in two weeks for the blueberries, and the blackberries, and, oh yes, those peaches.