It’s the dance that first stepped foot onto the sands of the Strand in the 1950s and remains a dance partner for life here for generations. 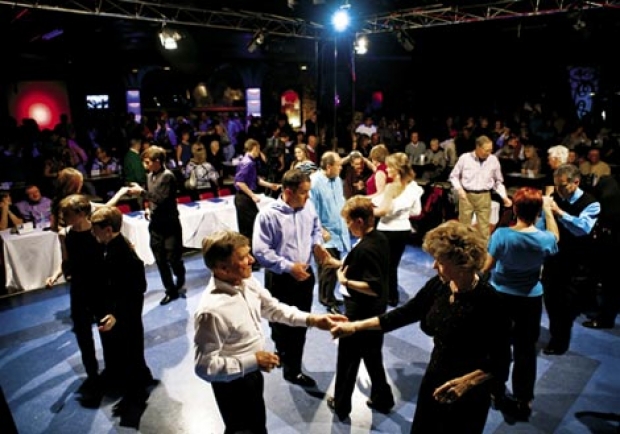 In Myrtle Beach, we keep the swing on the golf course and throw the shag on the dance floor.  It’s a tradition here that boogie walks back to black clubs near the old Pavilion in the 1940s. … And a dance that is in no way primitive or has any chance in six beats of slowing down.

Shag is a dance that’s constantly evolving and riding the waves of pop culture from one generation to the next, evident in the hodgepodge of ages of competitors in the recent National Shag Dance Championships—from senior citizens to smiling teens—and the mobs of thousands of shaggers that take over the streets of North Myrtle Beach during three annual Society of Shaggers (SOS) festivals.


“Everybody thinks it’s just a dance, which frustrates me. We don’t leave home to go dancing, we leave home to see our friends,” says Norfleet Jones, board member for the SC Shaggers Hall of Fame and advisor for Keepers of the Dance. “It’s not just for the purpose of dancing; it’s a reason to go. Your greatest dream is to clear the floor; it’s not about a trophy.”


Jones cleared a dance floor or two in his time—and won his fair share of trophies, landing him in both the North and South Carolina Shaggers Hall of Fame and naming him a National Living Legend, one that Jones schluffs off with a “That’s just for old people who have lived the lifestyle.”

He grew up in Raleigh and said he had to travel to North Myrtle Beach in the 1950s for the beach music bands. “That’s where the entertainment was,” says Jones. He went on to own Duck’s Beach Club, a mainstay on Main Street, for 15 years.


“There was a sign outside of Duck’s that used to say ‘Welcome Home,’” says Jones. “People from Columbia would always stand in front of the DJ booth and have a conversation the entire night. Having a 50-year friendship here is not unusual. … People with condos at the beach have children and now they come here to use those condos and dance, too.”


To get high marks from Jones, a judge at this year’s National Shag Dance Championships at Club 2001, you have to do more than the basics. “The thing I look for is whether or not they are enjoying it,” he says. “Or are they making a job out of it—for the sake of winning it? You can be technically correct, but not a very impressive dancer. If you just perform as a show, you take the emotion out of it and your thoughts aren’t where they’re supposed to be. But if you’re communicating with that partner, you can catch a ride on that magic carpet. … It’s a very emotional dance; it wasn’t created in a ballroom, it was about respect.


“I believe in individual style. Doug Perry, who was my mentor, taught me to be yourself. Do what makes you happy; whatever puts a big smile on your face, because that’s going to carry over into your partner. I don’t care if it’s at a competition or on a Friday night at Duck’s, it’s about dancing with your partner for three minutes and if you’re not into it, then you shouldn’t do it.”
When Jones, age 69, does it, he prefers the slower, smoother music. “The dance has evolved and thank God it has, or it would’ve died,” he says. “But, along with dancing to a little country and a little jazz, there’s still dancing to the music that I grew up listening and dancing to.”

Jones’ successor at Duck’s is David Shaw, owner for the past seven years. He says he’s also seen shag’s strong foothold in younger dancers, thanks to folks like Sam and Lisa West, who teach young shag competition dancers. “They have their own dance teams, and sometimes they’ll come into the club to dance and people will just throw money at them to support the growth of their team,” says Shaw.


Shaw, who was in the thick of planning the huge spring SOS three-day event in North Myrtle Beach, says the shag, for him, was passed down from his brothers on family vacations to North Myrtle Beach from Charlotte, N.C., as a child. “I used to watch my brothers shag and then I danced during my high school years,” he says. After losing sight of the dance when he went off to college in Idaho, his wife redirected him toward his passion when he moved back to Charlotte with her involvement in the Charlotte Shag Club.


He says that even junior shaggers have their own SOS. The rookie event began as 50 kids coming to the beach and has now risen to more than 2,000 junior shaggers, parents and grandparents gathering in Myrtle Beach from all over the country. There are 10,000 members (from 40somethings to 80somethings) of the adult SOS, according to Shaw. “Shaggers are family people,” says Shaw. “It’s a good, clean wonderful group of people–not rowdy drunks, but they do like to party and make friends. I’ve made thousands since owning Duck’s.
“My biggest enjoyment as a beach club owner is to be able to stand back and look out and see so many people come in, hugging each other and shaking hands,” he continues. “There’s a lot of friendship and a lot of love. People are proud to belong to it and proud to be part of it and look forward to going to their shag clubs and go weekly.”