Mention bikers on the Grand Strand and inevitably motorcycles come to mind. But gas-powered motorbikes aren’t the only two-wheeled vehicles zipping up and down our highways and byways. The other bikers, the kind using human power and not horsepower, may also be found in abundance. And they make much less noise. 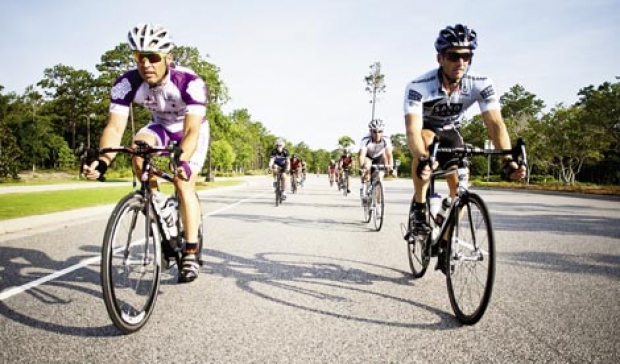 With our glorious lack of hills, our coastline is perfect year-round for casual pedal pushers in shorts and flip-flops, as well as the dedicated and growing bunch of serious riders obsessed with competition, clip-in bike shoes and spandex. Several area bike shops organize weekly rides for serious riders owning expensive road bikes, but welcome the beach cruiser crowd as well.

Grand Strand Bicycles has two area shops, one at the Sports Corner in Myrtle Beach and the other in Murrells Inlet. They not only rent, sell and service bikes, they also host two area clubs with a focus on cycling—Grand Strand Bicycle Club and the Myrtle Beach Triathlon Club. Beach Bike Shop on Broadway Street in Myrtle Beach also rents, sells and services bicycles and hosts several rides each week. All shops have loyal riding groups who take cycling seriously.

Still, other groups evolved spontaneously without a club or store sponsor and have weekly group rides leaving from a few different Grand Strand locations. All in all, biking here is alive and well, and growing not only as a high-stakes competitive sport, but also as a great way to work out, a casual hobby, or a cost-efficient and healthy way to get from point A to point B.

The most serious cyclists involved in organized rides, which represent a large portion of regular riders, treat these weekly events as actual training events for upcoming competitions. They include road racers who travel around the U.S. and internationally, along with triathletes who not only swim and run, but also compete on bicycle. The famous Ironman competition is the extreme form of triathlon, which has competitors swimming for 2.4 miles, biking for 112 miles and then running a full 26-mile marathon. One young local woman, May Lauzon, is an internationally recognized triathlete and is vice president of the Myrtle Beach Triathlon Club.

“I moved here on a whim,” said Lauzon, a 23-year-old Coastal Carolina University student who also works at Grand Strand Bicycles and is a North Myrtle Beach lifeguard. Lauzon rides every week, sometimes several times per week, especially if she’s in serious training.  “I finished my first [Ironman] competition last year and got a small tattoo on my ankle to commemorate,” she said. While the Ironman event is the best-known triathlon competition, Lauzon’s favorite triathlon events are much less grueling.

“There are different distances,” she said. “Many of our local competitions might take an hour to an hour and a half [vs Ironman’s nine to twelve hours]. The swim is 700 yards, the biking is 13 miles and the run is a 5k.” It’s still daunting to anyone who isn’t a trained athlete. The club has members as young as 13 and as old as 68, though the average is mid-30s. “We train independently and together,” she said. “Our bike shops host group rides and members of the cycling club and members of the triathlon club ride together. It’s really great as a social thing and a skill building thing.”

Just where are all these riders? You’ve got to be up early to catch them.

“Very often we ride out of Murrells Inlet,” said Lauzon. “Back in the golf course neighborhood areas—Wachesaw and the roads back in there. And we ride on the bike lanes in Murrells Inlet as well. In Myrtle Beach we sometimes ride along Ocean Boulevard. We go in the morning, which is quite safe. And another popular place is by the marina at Grande Dunes, on the Waterway.”

Horry County State Bank executive Bobby Doty is an avid rider and president of the Grand Strand Cycling Club. “We formed in January 2012, and the club is still in its infancy, but growing all the time,” said Doty. “Our big group ride has anywhere between 50-100 riders every Saturday morning from Grand Strand Bicycles in Murrells Inlet. Our club has about 40 members on the roster, but anyone can ride with us.”

The Agony of D’feet
Like any elite sport, there are those at the top of their game and those who are much more casual. Doty says that in big group rides the serious riders are out in front and break away from the pack right away. Others with less stamina or less high-tech bikes bring up the rear, but there’s room at the table for all, even those with beach cruisers or mountain bikes.

“You won’t go as fast because of the wider tires,” said Doty, “but the cool thing about our group rides is that anybody on any bike is welcome. It doesn’t matter whether you’re riding a beach cruiser or you’re a hard-core racer. I think that’s the unique part of our club—people will ride with you whatever your level. We have riders of all backgrounds—from CEOs to college students. Everybody has that same passion for riding a bike and being active. I think that’s the real draw.”

Lauzon agrees but concedes the majority of the group riders have at least basic road touring equipment, and she says it need not be that expensive. “For group rides, you really need a road bike,” she said. “There’s no rule against mountain bikes or other bikes, but it would be really hard to keep up. We do require a helmet—we won’t let anyone ride without one. And most riders have clip-in bike shoes. We have nothing against other types of bikes—I’ve got a fat tire cruiser at home that I ride all the time—it’s just that this is more of a training ride. The new bikes use technology borrowed from NASA. The price of the bikes really varies from a couple of hundred dollars to a couple of thousand. The right bike depends on your goals and how often you plan to ride.”

Lauzon’s triathlon club has around 45 members listed on its official roster, including club president Pete Politis, who  competes in Ironman events internationally.

Fleet Odom has worked for Beach Bike Shop owner Richard Hussey on and off for around a year. A freelance architect, Odom’s real passion is riding. “I just bought a brand new Raleigh Militis [racing bike],” said Odom proudly. “I have probably five more bikes at home, and that many frames, but this is the one I ride now. I raced competitively when I was in my 30s,” he said. “Myrtle Beach has always had some of the top racers on the pro-American circuit.” State cycling champion Ryan Swaim is a record holder from Myrtle Beach, as is Surfside Beach resident Shaun Walsh.

Odom helps organize regular group rides from Beach Bike Shop, which include Friday and Saturday morning rides, and mid-week casual rides, each with their own formats. Friday’s 7 a.m. ride is called a beginner/recovery ride. “It’s for beginning cyclists,” said Odom, “and also for our racers, who come along for their own recovery, meaning they’ve raced or ridden hard the day before. This [recovery] ride is designed to flush out the lactic acid in the legs. Saturday’s ride [7:30 a.m.] is a more spirited ride, a moderate pace, 40 to 50 miles.”

Safety in Numbers
The early morning rides are designed to beat the heaviest automobile traffic of the day, and the large groups help to create more visual impact and safety for the riders—but it can only go so far. More needs to be done, say these riders, to improve driver awareness and bicycle safety.

“You ride in the group for safety,” said Doty, “and everyone wears a helmet.”

“One time I almost didn’t wear a helmet,” said Odom, “and I’m glad I did. I went down. It always happens when you least expect it. I was going real slow, the bike slipped out from under me, I went down and hit my head to the point of cracking the helmet.

“On Ocean Boulevard, tourists, locals, cab drivers are not conscious of the bike lanes and they park there, forcing riders out into traffic,” continued Odom. “It’s hazardous. Maybe we need more signage up off the ground to alert drivers. And there’s the three-foot rule. Cars are supposed to give you three feet when passing you. They don’t.”
The area’s thousands of visiting international students, who ride at home everywhere, are particularly vulnerable. “They don’t understand how dangerous our roads can be,” said Odom. A car hit two Russian cyclists last year, and one died. Local triathlete Melia Tyndall, sponsored by Sketchers, was hit by a car and seriously injured last December, though she’s made a good recovery and is competing again. A helmet is credited with saving her life.

Hit The Trail
While the roads are risky for all travelers, Myrtle Beach, in particular, gets high marks for its abundance of bike lanes and dedicated bike and pedestrian trails. The area’s biking community utilizes many miles of well-maintained trails. There are popular trails within our two state parks, at Grand Park at The Market Common, trails near Robert Grissom Parkway and the YMCA, and many more miles of hidden trails that only serious bikers seem to know about. The city of Myrtle Beach has published a free Bikeway Facilities brochure and map, clearly marking and identifying excellent bikeways within the city. Most bike shops offer free copies of the map, as does the city.
Miles of dedicated bike lanes and trails are also an excellent way to get around town. A bike lane is a painted surface directly on the road, set aside for cyclists. A bike trail is a separate paved trail for cyclists and pedestrians, but no motor vehicles. These trails and lanes currently run from 82nd Avenue North to south of The Market Common.

Some consider biking a long forgotten pastime of youth, and for others it’s a serious passion. Those who’d rather be biking than doing almost anything else will offer an unending list of reasons to enthusiastically embrace the sport.

“So many runners look like they’re in pain,” laughed Odom. “With biking it’s lower impact, you can chat with the person next to you, go further, and see so much more.”

For details on the area’s group rides, visit www.grandstrandbicycles.com and www.beachbikeshop.com. For a map of area bike trails visit www.cityofmyrtlebeach.com/bicycles.html.

Catch a Ride
Plenty of opportunities to fuel your competitive spirit

You’ve got to be up with the sun to catch these local early bird cyclists and athletes who get their training in before automobile traffic and the heat of the day take their toll. Beyond regular weekend rides, a few events throughout the year have area cyclists (and their admirers) gathering in large group events and races. Many, but not all, are triathlon sprint events, which combine running, swimming and biking. Here are a few upcoming events that might inspire you to dust off that old bike in the shed.

September 22–23: Breakaway to the Beach. This annual fundraising ride to benefit the National Multiple Sclerosis Greater Carolinas Chapter features rides from Charlotte all the way to Sunset Beach, N.C. This event regularly draws some 1,500 cyclists, 400 volunteers and thousands of spectators along the route. For more information call (704) 612-2704.

September 23: MBTC Off-Road Sprint.
Near the Myrtle Beach YMCA on the Intracoastal Waterway. 6:30 a.m. Park at the YMCA, walk over the bridge and follow signs to the trail where swimming, a run and a mountain bike race combine. For more information visit www.mbtriclub.org