The Most Wonderful Time of the Year

'Tis the season for a winter wedding 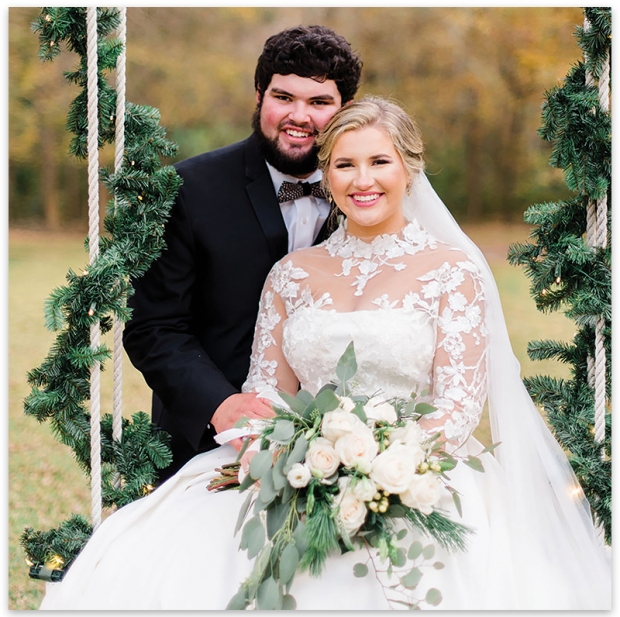 “At only 15, everyone thought that it was just another relationship, but we were inseparable,” says Jordyn. “We hunted together, attended church together, and went to the football games when our schools played each other.

"We centered our relationship around what we felt was a Godly relationship,” she continues, “and we knew it was forever. We continued to date all through high school and college, and he proposed almost six years later.”

It was a proposal that met Jordyn’s two requests: that family and closest friends had to be there, and someone to capture the moment in photos. On her 20th birthday, Jordyn invited those family and friends to celebrate her birthday at a beach house they rented from a friend, but Noah had other plans for that day.

“My Dad, the only one in my family who knew what was going on, told me that, for the last gift, I had to close my eyes in order to receive it,” she remembers. “In complete shock, I was super pumped, thinking the entire time that I was finally getting a Goldendoodle."

Dad then blindfolded Jordyn, walked her down the closest beach access, pulled the blindfold off, and kissed her cheek. She opened her eyes to find family and friends holding a life-size, lit-up sign saying “Marry Me” and Noah standing by with flowers at the end of the walkway lit with candles.

The magic and romance continued to build on their wedding date, December 4, 2021, when they tied the knot and celebrated with a reception at Wildberry Farm in Marion. Jordyn prides herself on incorporating original touches, such as having an artist friend of hers to paint her dogs and Wildberry Farm, which appeared in the wedding invitations she designed.

“My sister-in-law, knowing how much I adore Christmas, even surprised me by hiring Santa to come and take photos with us and greet everyone,” says Jordyn. “And Noah’s dad married us.”

More special touches embraced the Christmas theme, like the main reception hall decked out with Christmas trees hung with elegance and care, like ornaments that commemorated family and friends who have passed away, and wooden ornaments stamped with their wedding date and a Christmas tree, as well as a table crafted by Noah’s grandfather that also doubled as a guestbook.

“I wanted to place the table in our home as something special to remember and had a friend write on the bottom of the tabletop, ‘It takes a village,’ along with a Bible verse, and we asked that everyone sign it,” says Jordyn.

For the newlyweds’ memorable exit at the end of the night, guests threw snow to recreate a winter wonderland as they rode away in a 1968 Corvette that belonged to a family friend.

The Enzos today live in Conway, where it all began.