The Hunt for the First Blue Marlin

April 2015
Written By:
Kate Evans
In 1964, 46-year-old Katherine “Cappy” Fitzgerald overcame improbable odds and caught the first blue marlin off the state of South Carolina. This was the beginning of a billion-dollar industry for the Lowcountry. 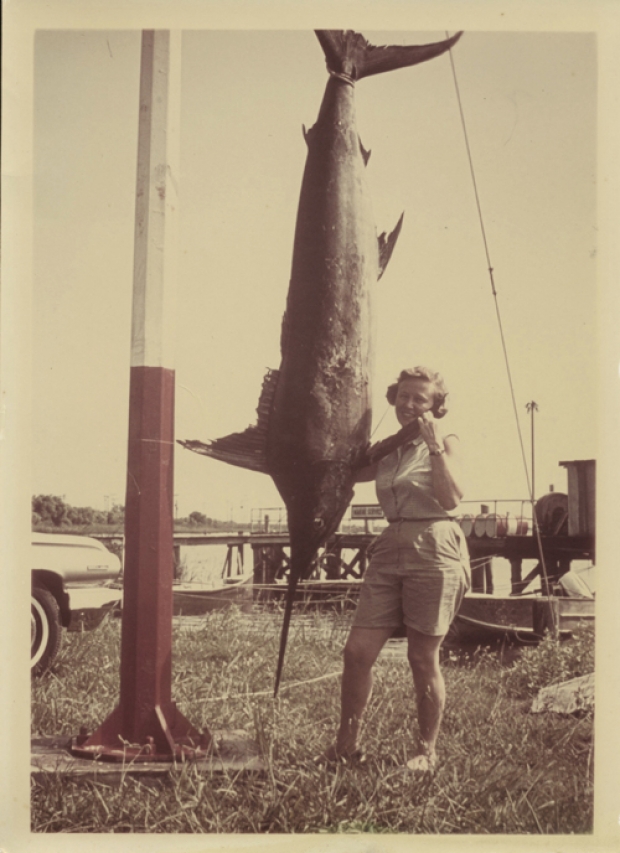 The morning of June 4, 1964, was warm and bright. The conditions were perfect for the crew of a 38-foot Post sport fishing boat sailing the 50 miles from the sleepy port of Georgetown, South Carolina, to the cobalt blue waters of the Gulf Stream. Katherine “Cappy” Fitzgerald, a 46-year-old redhead, and her husband, L. K. “Dinks” Fitzgerald, were experienced saltwater fishermen and that day, like most days, they were hunting blue marlin.


The crew also included their children, Susie and Kenny; friend, Ellison Smith; and their Captain, J. E. “Biddy” Alderman. Residents of Spartanburg, the Fitzgerald family had spent the previous night on their boat, as they did just about every weekend they could escape the upcountry and fish the waters off Georgetown.

On the bumpy ride out to the deep currents of the Gulf Stream, the top of their antenna broke off, but Dinks and Biddy decided to continue to head offshore. Biddy captained while Dinks focused on the art of fishing, attaching a Kona Head high-speed artificial lure to a flatline and dropping it into the sparkling wake. Around mid-morning, something struck the line and struck it hard.

“All of a sudden, all hell broke loose,” remembers Kenny Fitzgerald. No one was sure what was on the other end of the line, but Dinks didn’t hesitate when he handed the rod and reel to his wife. “It was an 80-pound rod with a 12-aught Penn reel and an 80-pound braided line,” Kenny continues. Cappy sank into the white leather fighting chair and clipped the reel into her leather shoulder harness while Dinks shouted encouragement and Biddy manned the helm.

It took seconds for the crew to realize with excitement that it must be a marlin as the rod bent, looking like it would snap in two. Landing a fish that size is a delicate art. An experienced angler, Cappy knew how much tension to keep on the line. The marlin sped away, the reel screaming, and then when the fish rested or changed direction, Cappy would gain some slack, pumping and winding. Kenny kept a steady stream of water on the gears smoking from the stress on the reel.

“My job was to keep her fighting chair pointed in the direction of the line, turned toward the fish,” explains her daughter, Susie Carter. “I remember the tops of my feet got fried from the sun.” Cappy remained focused, fighting the blue-gold behemoth, making up with skill what she lacked in strength.

After what seemed an eternity but was, in reality, an hour and fifteen minutes, Cappy was able to bring the jewel-toned marlin behind the boat so Dinks could grab hold of the leader. The fish had struck the bait so that the hook went right through its black, bone-like bill, something that no one on the boat had ever seen before or would ever see again. After a final struggle and gaff, they were able to lasso the tail and hoist the massive marlin up on the gin pole.

This was the first blue marlin hooked and boated in the waters of South Carolina, and it changed everything. Recreational sport fishing grew to be a billion-dollar industry as the state drew anglers from around the world. It’s unclear whether Cappy and Dinks knew that day that their 237-pound blue marlin would change the course of South Carolina history, or that the state would catapult into becoming a premier game fishing destination, but they did believe that the marlin were out there and that they were going to be the ones to find them.

Back in the late 1950s, Dinks had scouted Georgetown as the best place to dock his boat and begin his hunt for marlin. The port had two advantages, the first being that it was the closest to Spartanburg, and the second that it was home to a very small group of locals who were also pioneering anglers. These marlin-hunters were all talented, passionate and daring. Dinks docked his boat along with Sam Crayton’s Bezo and Wallace Pate’s Nautica I. Local legends Jim Johnston and Bony Peace were fresh out of college and also part of the quest to land the great blue marlin. This small fishing community would share tips, trade information and work together, but always with a good-natured competitiveness.

Many of the Georgetown old-timers thought that Dinks, Cappy and the other young marlin-hunters were crazy. If there were marlin out there, they weren’t close enough to Winyah Bay for anyone to catch one. The Fitzgeralds’ good friend, Judge Ellison Smith III, publically declared that if they caught a marlin off South Carolina, he would eat it. Folks would chuckle to themselves and shake their heads as Dinks, Cappy and their children sliced through the dark waters early Saturday mornings in search of billfish.

In those days, fishermen stayed within well-known fishing territory, about 15 miles offshore. By the 1960s, technology was catching up to ambition, and lighter, faster boats meant daytrips to the Gulf Stream were possible, though few people were making the exhausting trek. Sixty miles from Front Street, the Fitzgeralds once saw a Soviet submarine surface and study their craft before submerging. Several minutes later, an American submarine surfaced, also interested to know what a 38-foot sport fishing boat was doing so far offshore. The
Russians and Americans seemingly took a break from the Cold War to express their skepticism that anyone would be fishing for marlin off the coast of South Carolina.

But Dinks was, above all, a scientist, and he knew what he was doing. He would listen to the weather on the drive down from Spartanburg, paying attention to patterns that might hint at the offshore weather the next day. He made bait, strung lures, studied the tides, currents and water temperature, and kept meticulous notes on his large white NOAA charts. He specially ordered tackle from New York’s Abercrombie and Fitch and used a state-of-the-art LORAN positioning system.

The Fitzgeralds took numerous trips out to the Stream, catching big-bellied tuna, blue-green dolphin and sailfish, but no marlin. Dinks would stare at a chart showing the coastline from North Carolina to south Florida and trace the marlins’ migratory path. He knew that if they were catching marlin off North Carolina and Florida, then the fish would have to pass by South Carolina, and he would be ready for them.

Back on board that bright June morning, with the shiny, massive marlin in the cockpit, there was backslapping, handshaking and an enormous sense of pride around the boat. “We got what we came for so we thought, let’s go back,” remembers Kenny. Without the antenna, they were unable to radio ahead their good news, but before entering Winyah Bay, they raised the blue marlin flag to signal their catch. “We sailed all the way up the bay with that flag flying and no one to see it but us,” grins Kenny, but when they arrived at the Front Street Esso docks, word quickly spread.

Dinks and Biddy hauled the marlin up and into a wheelbarrow and paraded it straight to Cathou’s Fish House, where it weighed in at 237 pounds. To show it off, they hung the marlin from the tall Esso Gas sign at the docks. People started coming from all around to see the massive game fish, the one few people believed could be landed. “There were hundreds of people and they were beyond themselves,” remembers Susie. Soon newspaper reporters from The Greenville News, The State and The Post and Courier joined the crowds and news spread across the region.

The Georgetown Times ran the story, “Spartanburg Housewife Catches Marlin Off Coast,” announcing that with the catch, “fishing history was made.” Don Hammond, a fisheries biologist with the Department of Natural Resources (DNR) recalls “the tremendous excitement surrounding the news of landing the marlin. [The Fitzgeralds’] efforts began to establish South Carolina as a destination for bill fishing and recreational fishing.”

Dinks finally caught his own marlin two summers later, a 235-pound gray-blue beauty, the same week that Wallace Pate landed his own off Georgetown. According to Jim Johnston, one of the only pioneers left who still fishes out of Georgetown, “in a few short years, South Carolina was hosting marlin tournaments with big prize money. The entrants in the second Georgetown Marlin Tournament landed 11 marlin. The third tournament had 49 boats participating. It got to be big.” The course of South Carolina fishing was set, as anglers from around the state, the country and eventually the world, came to fish for big game in the waters off Georgetown.

When asked why Dinks handed the rod over to his wife that June day in 1964 and didn’t save the honor of landing the first marlin for himself, his son, Kenny, thinks a minute. “It was firstly because she was a damn fine fisherman, but I also think he meant it as, she’s my buddy and we’re in this together.”