A search for the area’s best taqueria and taco 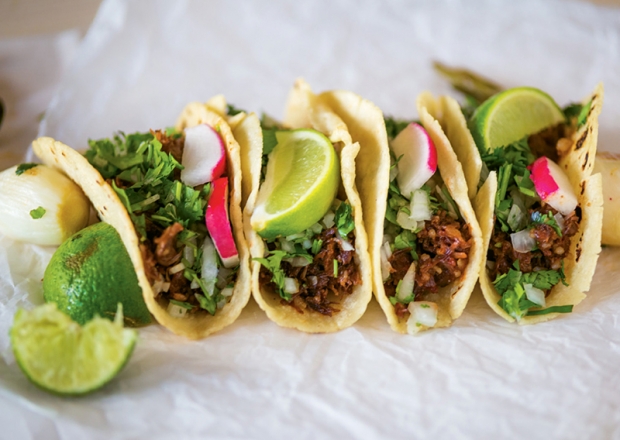 Ours is an age, it can be said, of heightened taco awareness. The old American conception of the taco—ground beef or shredded chicken served in one of those pre-packaged kits from the grocery store—no longer works for those of us who consider ourselves taco-enlightened. Neither do fast food chains with Chihuahua mascots speaking in crude Spanglish. And neither do most standard Mexican restaurants where you can order, say, the same number 17 the world over: one soft taco, one hard taco, served with rice and beans.

What this age of taco-lovers seeks are tacos closer to the source. Tacos that we might call, even if mistakenly, authentic—with smaller, homemade tortillas; with beef slow-roasted on a pineapple spit; with carnitas cooked in milk topped only with cilantro and onion. I count myself among these modern-day taco lovers, and I count myself lucky. The Grand Strand—particularly Socastee—is home to a thriving Latino population, and, if you know where to find them, there are tacos aplenty, tacos galore, tacos ad infinitum.

But true taquerias are places, more often than not, tucked into a strip mall, beside the nail salons and the laundromats. These are places that usually don’t pop up on Yelp or your GPS, and so to find them requires you to drive around and look for a sign in a language you may not know. Sometimes these taquerias are connected to a tienda (market) or a carniceria (a butcher shop) or a panaderia (a bakery). These are places where English is scantly on the menu (or not on the menu at all).

Over the span of four months I was on a quest—perhaps, like the Spanish literary legend from La Mancha, a quixotic quest—to find the best taqueria taco in our area. By necessity, I had to make some exclusions. First rule, of course: No chains. And although I enjoy what might be called the “hip fusion taco”—the Korean BBQ taco at Nacho Hippo, for instance, or the fried catfish taco at Bonfire, in Conway—these places, as far as I can tell, are not owned and managed by people from Latin America. Furthermore, I also decided to limit myself to Socastee, which has the densest cluster of taquerias along the Grand Strand.

To do this—and, yes, I had to do it—I ate more than 50 tacos in four months. You can do the math. You can calculate how many tacos that averages out to per month, or per week, but it went like this: Every Friday I would stop into a new Socastee tacqueria for tacos and tacos only. Barbacoa tacos, chorizo tacos, tacos al pastor, tacos with cow tongue and pig tripe. You name it. Amazingly enough, I am not sick of tacos. Indeed, think I could eat tacos for every meal, every day, and still be a happy (if very large) man. And my list is far from exhaustive: there are still plenty of tacos to try at these places; there is, you could say, still more work to be done.

It helped, in part, to be armed with a remarkably insightful book, Jeffrey M. Pilcher’s Planet Taco: A Global History of Mexican Food, which sums up the impulse behind my journey: “The quest for authentic food acquired new meaning in the mid-20th century as industrial food began replacing home-cooked meals.”

However, he notes, “there is surprisingly little consensus about what is properly Mexican, even in Mexico” and that “authentic Mexican food was invented in the global marketplace by promoters of culinary tourism in order to compete against industrial foods from the United States.”

Ah, the great thing about food is that it will return you to the sensory pleasures of the body when you begin to get too high-minded. You can theorize all you want, but when you finally sink your teeth into a taco, there’s no need to think about anything but, as it were, the taco itself, and not the idea of the taco.

The first tacqueria I tried was La Unica, across the street from Socastee High School. It was a solid introduction to the world of the Socastee tacqueria—no English on the menu, no free chips, a tienda next door and a meal of four fresh, made-to-order tacos—two al pastor and two carnitas. (This pretty much became, incidentally, my go-to order.) I liked the slight spiciness and burnt texture of the al pastor, but I found the carnitas a little too dry. Fortunately, though, this is where I first beheld the spice cart—a silver metal serving station where you can doctor up your tacos with pickled onions, lime, salsa, jalapenos and hot sauces. Not every tacqueria has one, but La Unica has the best.

And here, too, is where I began trying out my conversational Spanish for the first time. I had been practicing with audiobooks.

“With a credit card?”

I laughed at myself and went next door and paid in the tienda, where I bought a Coke and a churro (a fried, sugary dough pastry stick). I felt full, and good, and so I was hooked—a taco man on a taco quest in a taco town.

The next week, then, I found myself not far up the street, at Tortilleria Hermanos—a tacqueria inside of a tienda, where pinatas and soccer jerseys hang from the ceilings. There was a buffet table in the back, but I asked to order from the menu. They didn’t have a menu. Still, they politely offered to cook me tacos a la carte—and then brought me out some stale chips and bland salsa.

My disappointment, though, soon dissipated. I ordered two al pastor tacos and two beef tacos, which came on tortillas so thin and oval-shaped that they were unmistakably homemade. Though the beef was a bit fatty for my taste, the al pastor meat, compared to La Unica, was smaller; and it achieved a superb balance of sweetness and spiciness—served with grilled (rather than pickled) onions. It would take me almost 30 more Socastee tacos to realize that this was one of the top five tacos I would eat during my quest.

Next, I ate at La Hacienda, which is more of a typical Mexican restaurant (beside the BiLo on 707), on the following Friday because they serve beer, and I needed a beer. A Michelada, to be exact—a beer with tomato juice. I’d been practicing my Spanish enough to say, “Anoche tengo borracho. Como se dice ‘hangover’?” (“Last night I got drunk. How do you say hangover?”). I was suffering from, they told me, una cruda (a hangover), and the bartender offered me some fresh peppers from his garden to sweat it out.

It was too bad, then, that I found the double corn tortillas overwhelming—more tortilla than meat—and that the tacos were more expensive than the $2 per taco that I had been accustomed to paying. To be fair, the place does not bill itself as a tacqueria; and, of course, there is always the probability that the problem was internal (mi cruda). I also have a friend who swears by this place, so I’ll return soon enough—and order the fajitas, sans hangover.

But then, just when I was feeling as if I had reached peak taco capacity (i.e. probably around five pounds heavier than at the outset of my quest), I hit upon the El Dorado of Socastee tacquerias—two places of pure taco gold.

Ok, to be fair: I had actually eaten at both of these tacquerias before. They are, really, what set me out on my quest in the first place—to see if there was some hidden world of amazing tacos that I had been missing beyond these two spots—Taqueria Guanajuato (in the Big Block Shopping Center on 544) and Dos Hermanos (in the Coastal Commons Shopping Center on 544).

What sets these places apart? What makes these tacos, if not the most authentic, simply the best tacos in town? Partly, it’s the friendly service and the most eclectic ordering options. But it mainly, of course, comes down to taste.

Like any food, there is something ineffable about explaining taste. Words fail us. But words are what a writer has, so here goes: Freshness.

Yes, it is that simple. You can taste the pineapple in the al pastor at Taqueria Guanuajato because, well, there you can see it when you walk in—the pork spinning slowly on the pineapple spit. And neither place tries to mask its meat with anything but cilantro and onion. Nor do they overdo the tortillas. The combination of meat, tortilla and vegetable here is a holy trinity that achieves another holy trinity—perfect texture, flavor and bite-ability.

I realized—too much, but not too late—that this journey had a Zen quality to it in the end, as all journeys do—I had reached the place where I started, which is at the two best taquerias in town. Maybe there’s no purely authentic taco here—or anywhere—but there are certainly these tacos.

And these tacos are certainly … well, words fail me. Amazing, great, delicious, superb—those words don’t do these tacos justice. So, because I learned the helpful tip that most English words ending in -ic can have an -o added to it in Spanish, I will say this: these tacos are fantastico, terrifico, classico, poetico—and, perhaps, even authentico.

Editor’s note: The writer dedicates this article to the memory of Anthony Bourdain, one of his heroes. “I would never have embarked upon such a quest if it weren’t for him,” he writes. 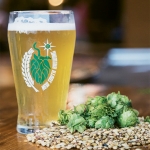 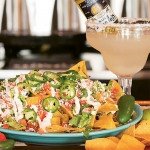 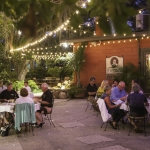 One of the great joys of living in a moderate climate is the sheer volume of days and nights we may enjoy meals en plein air, alfresco, outside. Many of the thousands of Grand Strand eateries are designed to accommodate those looking to eat out of doors; kind of like picnicking without all the hassle. Whether creek side, oceanfront, on the Intracoastal Waterway, or even at a table on a nicely decorated tree-lined porch, enjoying breakfast, lunch or dinner in the fresh South Carolina air is a true Grand Strand treat.
GENERAL TAGS:
food / restaurant / Conway / Nacho Hippo / Mexican restaurants / best tacos / tacos