The Pad, Ocean Drive’s decades-old hangout, was the life of the party 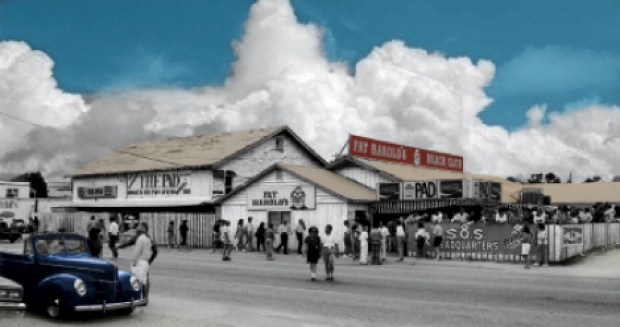 It was the late 1950s, and Ocean Drive in North Myrtle was the place to meet and mingle. McElveen’s Drug Store, Hoskin’s Restaurant, and nightly fireworks were staples of beach life—but the lure of fast fun and beach music drew many a student to The Pad.

Opened by C.W. Blankenship in 1955, around the same time as the Ocean Drive Pavilion, The Pad was a wooden beach house, its stomping grounds originally situated underneath a “crash pad” for Myrtle Beach lifeguards. It had a yard for dancing, washtubs as coolers, and a downstairs bar offering up 25-cent beers. It was also the birthplace of the shag, the six-count rhythm to the likes of Willie Tee, the Catalinas, and the original Drifters, and now South Carolina’s official state dance. At the time, the Shag was considered uncouth, so a wall was constructed to hide the dancing.

Harold Bessent, manager of The Pad for its last ten years, and longtime owner of classic shag venue Fat Harold’s, tells of ice-filled bathtubs of beer and thirty-six years of shag lessons. “It became a sort of mecca,” Harold says of The Pad and Ocean Drive, his eyes lighting up.

Mike Boyd came to The Pad just once in ’64. He remembers, “They would stack beer cans against the fence—you could see the PBRs [Pabst Blue Ribbon] spilling over the top.” Mike and his wife Connie are now the owners of Boulevard Grill, but back then he was one of the “Air Force guys.”

Graffiti-covered and ripe with history, The Pad’s structure did not meet city specifications and was torn down in 1994, though there were plenty of talks to save it. Boyd collected beams during its demolition for constructing his bar at the Boulevard Grill. Though this summer institution is now gone, youthful pilgrimages to Myrtle Beach continue. Here’s hoping teens find a spot as endearing and enduring as this
iconic hangout. 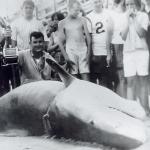 Catch of a Lifetime