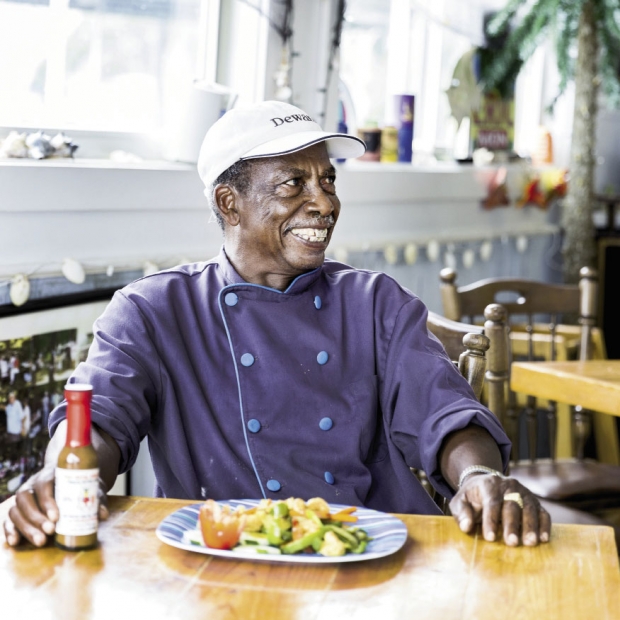 Belle Isle is a quiet place, almost eerily so, isolated as it is three miles past Georgetown, down a back road, nestled on the Winyah Bay. Ivy climbs the tennis court fence, no guard is in the guard booth, only a few cars pass. When the wind picks up, it’s all you can hear, yet you still know that the people who live and work here must love it this way—the silence, the wind, the wide water. It’s mysteriously enchanting, absolutely beautiful.

And if you follow the road down to the marina on a weekend afternoon, you’ll hear, faintly at first, the joyful beats of Bob Marley pumping through the speakers at the Belle Isle Grill. Always Bob Marley, for there to greet you, behind the counter and from within the kitchen, with his gold-toothed smile and infectious laugh, will be Eric “Mon” Sutherland, a Jamaican chef who’s been serving up his spicy dishes for nearly 10 years at various restaurants on the South Strand.

“I came here and cheered the people with my attitude and different food,” he says in his inimitable and heavily intoned Jamaican accent. He hails from St. Mary Parish, in the northeast of the island country, having grown up on a 120-acre farm where his mother cooked for 12 children. “I’m lucky. People like what I do. People fall in love with the food.”

The food on the menu here may at first seem like standard snack bar or marina grill fare—wraps, burgers, wings, fried shrimp. But it’s all fresh and infused with Chef Eric Mon’s homemade jerk spices and sauces, and on the whiteboard in the corner you’ll see the daily Jamaican specialties, items such as stewed oxtail and curry shrimp and mahi mahi.

“I have a passion for that food,” he says. “Some people put food from freezer to fryer. You have to put love in that food—jerk pork, jerk chicken, rice and beef, fish, shrimp, brown-stewed shrimp, shrimp in a butter sauce, shrimp all kinds of way. In cooking you don’t have a favorite. You just bring the meat or the fish or the pork to whatever you want it to taste like.”

Such autonomy is Chef Eric’s modus operandi. He doesn’t employ any waitstaff here, preferring to serve and bus the dishes himself, and this winter he plans to take off for a month and vacation back home in Jamaica. Such a laidback attitude—which, at first, seems utterly Jamaican—is actually a far cry from the bustling kitchens of his past.
“I come from a culture where I had to work,” he says. “I had five kids. I had to work to go get it.”

Though he did spend a little time training formally and cooking in Jamaica, it was aboard cruise ships that he first learned to be a professional, spending time in the kitchen when he wasn’t waiting tables. He picked up bits of cooking knowledge all over the world, and then anchored down in St. Petersburg, Florida, to open up the E-Z Cafe. He later opened Jamaican Cafe on Main Street in Atlanta.
When the Great Recession hit in the late 2000s, he got a call from an old worker of his from the E-Z Café, Ma Rue Blue, who was moving to Pawleys Island to open up what would become a relatively short-lived but terrific local juke joint, Mama Rue’s Blues Garden. She wanted Eric as her chef and partner, and he agreed. Even though the restaurant closed, he stayed here on the Grand Strand, finding jobs as a kind of “freelance chef” in bars from Surfside to Pawleys Island.

Everywhere he’s gone, though, he’s carried with him his special blend of hot sauces—Blue Mountain Flame, a tomato-based hot sauce; a Mango Pepper Sauce—and his classic jerk pepper sauce. Now he bottles them under the auspices of the Port Royal Spice Co., and they can be found in sundry Strand locations—on the table at Graham’s Landing in Murrells Inlet, at the Hammock Shop and Lowe’s Foods in Pawleys—and, of course, in his online store.

“In Jamaica I created something used by the poor to make it taste the way I want it,” says Chef Eric as he explains the original function of hot sauce and how he has adapted it for his own cooking. “The herbs and spices I put together, I get it the way I want it. Nobody can take that from me. I want to do a peach, I want to do a papaya—more fruity hot sauce. It bites, but it tastes good. Nobody teach me. It’s creative. I taste it, and if I like it, somebody going to like it. I have good taste.”

This is, in essence, his mantra. He talks about “bringing out” the taste of food with his sauce, rather than trying to smother it or drown it out. But other than that, he’s pretty secretive about his recipes, preferring instead to fall back on his own subjective preferences.

“I don’t really have much recipe,” he says. “I believe that a recipe cook—a teaspoon of that, a tablespoon of that, one ounce of that. No, no, no. It doesn’t taste good. What is your favorite flavor? Your recipe is your flavor, and I don’t have to like it.”

As he says this, he looks around at the place he’s been for a year now. It’s a mix of his Jamaican-themed décor and typical marina pictures of men grinning and holding up prized fish. Bob Marley is singing “A mellow mood has got me, /Let the music rock me.” Outside, the wind has picked up, rocking the boats in their slips beside the docks.
He grins, deciding he needs to say one more thing. 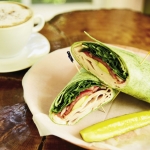 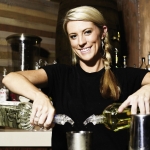