Staycation-Be a Tourist for a Day In Myrtle Beach, SC

There’s nothing quite as fun as letting loose in your own town and playing the tourist, even if just for a day. Stroll along the Boardwalk, eat too much ice cream, try that thrill ride you said you’d never try, see the Grand Strand by helicopter, peruse the trinkets at the Gay Dolphin and eat at a Calabash-style seafood buffet. Haven’t done any of those things? More than 15 million annual repeat customers have, so take a tip from them and get at it. Our summers are short, so don’t miss out. 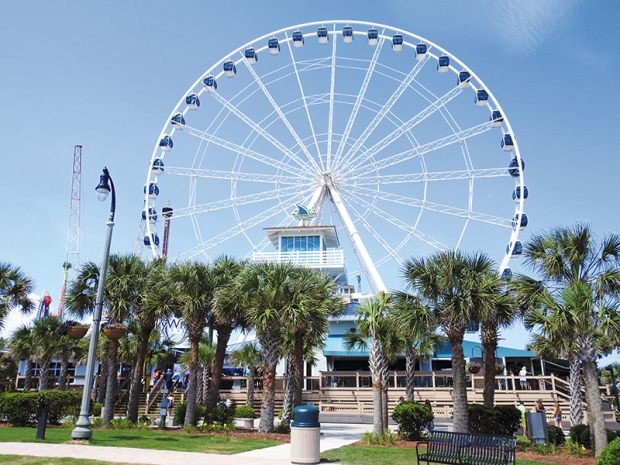 You can’t be a “tourist for a day” without hitting downtown Myrtle Beach’s Ocean Boulevard. Start at Peaches Corner, first opened in 1937 (corner of Ninth Avenue North and Ocean Boulevard) for a foot-long hot dog. Next door you’ll see The Bowery, a honkytonk beer joint and legendary country music bar since 1944. Nearby arcades are almost as old. The block between Ninth Avenue North and Mr. Joe White Avenue hold the history and memories of millions of visitors. Follow in their footsteps and make some memories of your own.

Adjacent to Plyler Park in downtown Myrtle Beach, the SkyWheel may be among the tamest of the area’s thrill rides and is certainly one of the most visually impressive. The $12 million high-tech Ferris wheel stands nearly 200 feet tall and features 42 climate-controlled, glass-enclosed gondolas, which seat four to six people and is one of the largest of its type in the United States. You could close your eyes, but it’s way more fun to keep them open. skywheel.com 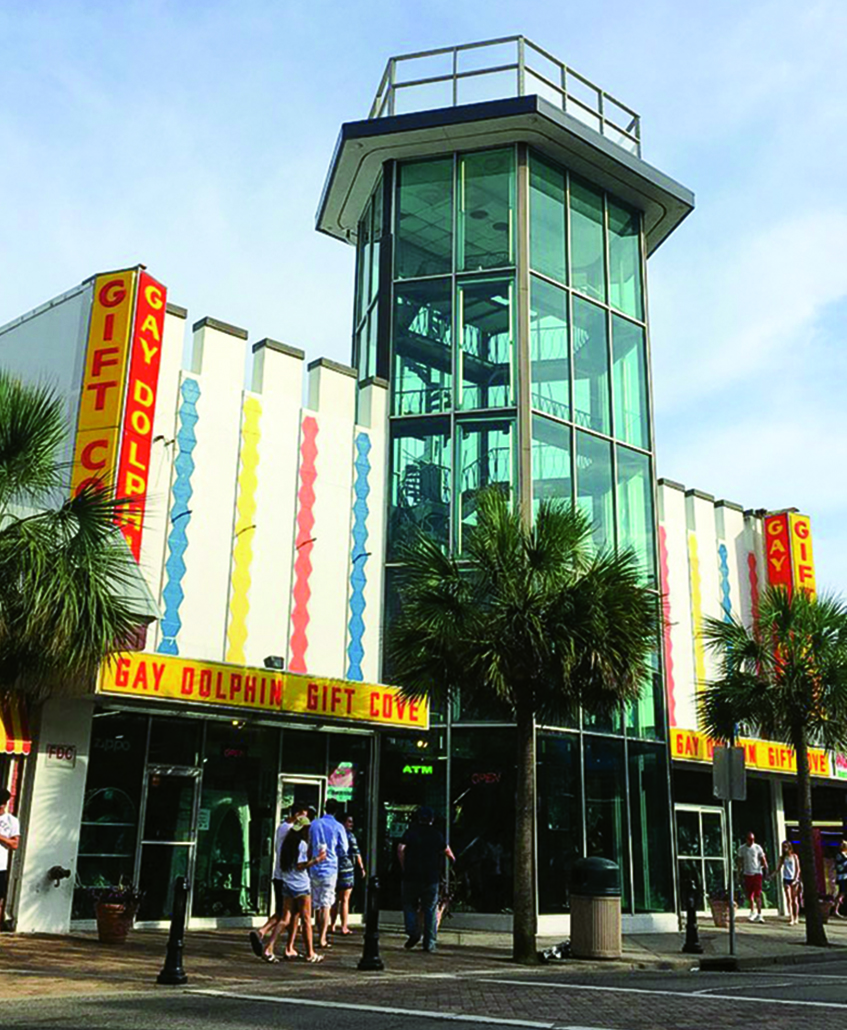 With access from Ocean Boulevard or the Myrtle Beach Boardwalk, the iconic Gay Dolphin Gift Cove and its ever-present patriarch, Buz Plyler, are an enduring legacy to the Myrtle Beach of old. First opened in 1946, the Gay Dolphin is patterned after the centuries-old curiosity shops of India and China, where Plyler has been on buying trips. “They will never go out of style,” he says, and the nostalgia and sentimentality afforded his gift shop will keep it going strong for many years to come. gaydolphin.com 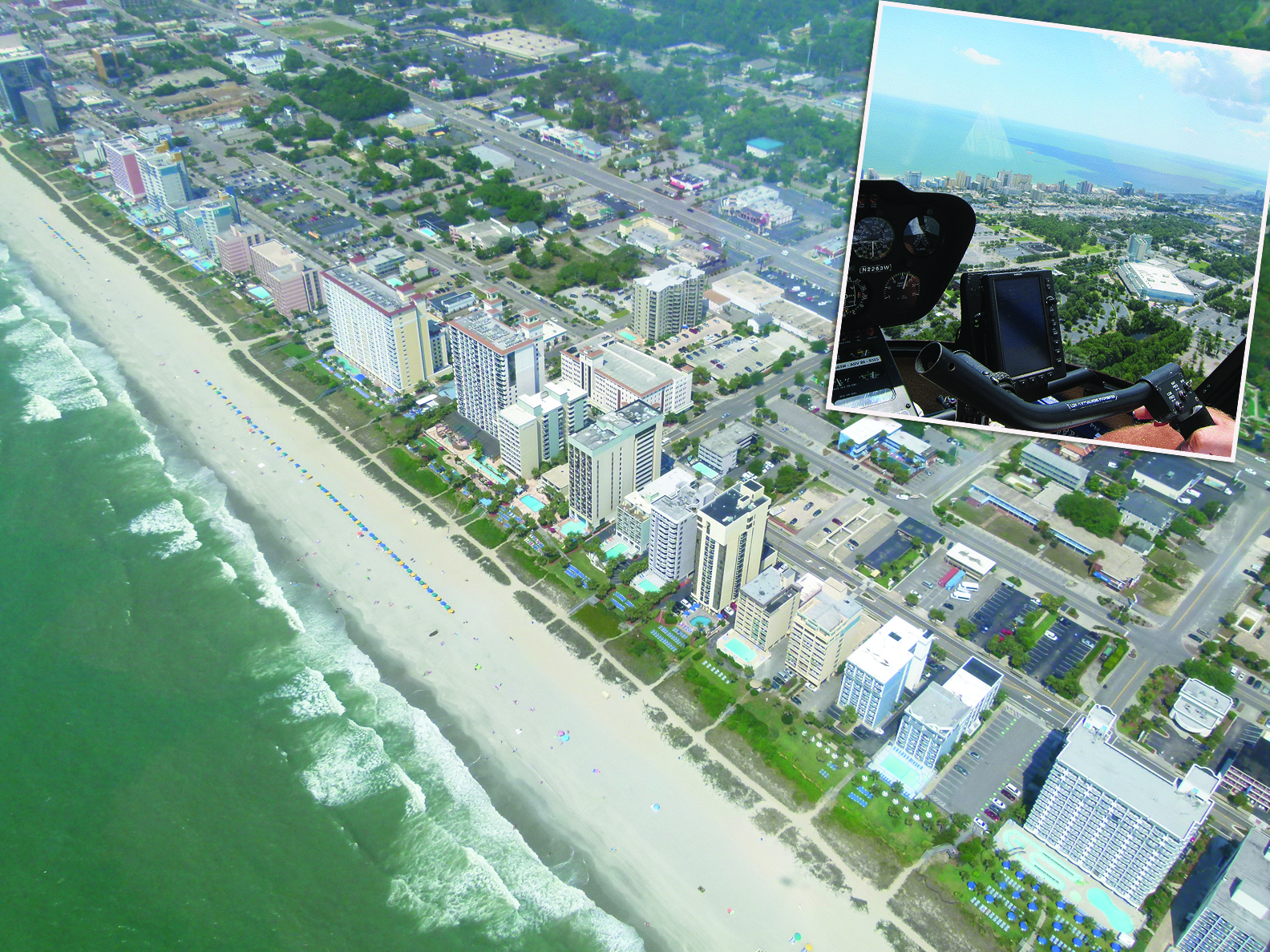 It seems the skies are always buzzing around the Grand Strand, which now boasts three helicopter tour companies. Helicopter Adventures operates from behind the Hollywood Wax Museum near Broadway at the Beach and is the owner of the fire truck red choppers that come and go every few minutes all summer long. The company offers an introductory $20 short flight, but longer flight packages are available. helicopteradventures.com

Located at the end of the Myrtle Beach International Airport’s runway, OceanFront Helicopters is literally seconds away from the coastline, offering spectacular views even on its introductory $20 rides. Longer tours ($60–$180 per person) cover many miles and places of interest from North Myrtle Beach to Murrells Inlet. oceanfrontheli.com

In keeping with other area tour companies, Executive Helicopters also offers introductory $20 rides, but focuses its trips on the North Strand. Its Basic Tour (around six minutes in length) covers about nine miles with pilot-guide communications pointing out landmarks of interest. executiveheli.com

Eat All You Can

What says “staycation” more than stuffing your face, at least once in a while? The ever-popular Calabash-style seafood buffets that have become synonymous with a Grand Strand vacation are everywhere, as are country cooking, BBQ, steakhouses, seafood restaurants and as much authentic ethnic fare as you might desire. While it’s hard to pick from so many, here are six, from the North Strand to the South Strand, worth checking out.

From the moment Rioz first opened its doors in Myrtle Beach in 2006 (and in North Myrtle Beach in 2019), locals and visitors descended en masse to experience the first of its kind in the area—an authentic Brazilian steakhouse where servers travel table to table with a huge variety of meats on skewers, hot and sizzling fresh out of the the wood-fired ovens. The hot and cold salad bar alone is a feast for the eyes and taste buds, but most come for the never-ending, mouthwatering beef, pork, lamb and poultry. rioz.com

Choose from crab legs, steaks, a pasta station, seafood (grilled, steamed and fried), salads, in-house bakery treats and so much more. The large restaurant is also loaded with authentic maritime artifacts and their very own model ship collection from master shipwright Jimmy Frost. See model ships and planes, including an 18-foot replica of the Queen Elizabeth II, movie props and naval ships. originalbenjamins.com

In the bright aquamarine building across the street from Broadway at the Beach, Captain George’s serves delicious food 364 days per year and is closed only on Christmas. With too many buffet items to even think about listing, just know that all your favorites are included: snow crab legs, steamed shrimp, clams, mussels, oysters, chicken, sirloin steak, sides, salads and desserts. There’s even an a la carte menu, too. captaingeorges.com

The Fishing Village at Crabbersville, USA, is the setting for this delightful, award-winning seafood buffet. For more than two decades, Crabby and his scurvy staff have offered crab legs and countless additional items on their all-you-can-eat seafood buffet, which also includes chicken, roasted prime rib, pasta, ribs, soups and salads, plus a full bar (and a fruit and dessert bar, too). crabbymikes.com

For nearly 60 years, Prosser’s BBQ has been serving country cooking to its loyal clientele from the same location in Murrells Inlet. Known for its BBQ and seafood buffet, you’ll find shrimp, oysters, plenty of sides like mac and cheese, lima beans and hushpuppies, plus desserts. Prosser’s also offers a breakfast and lunch buffet. prossersbbq.com 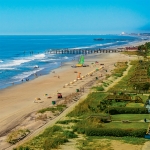