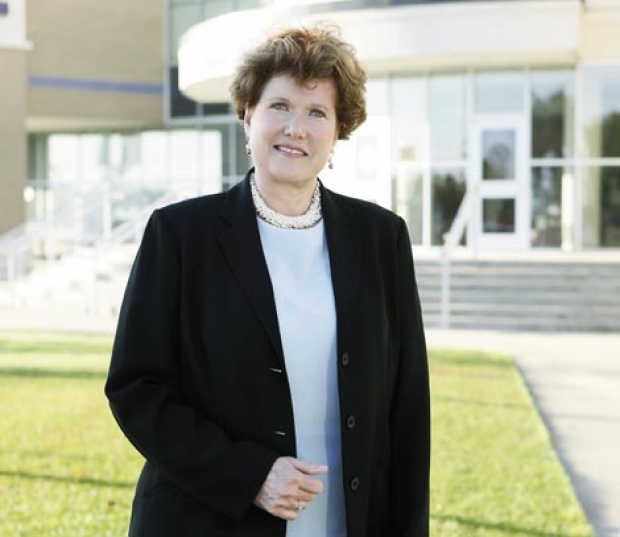 As she talks about the Grand Strand and friendship, it is clear that Mary Eaddy harbors a strong devotion to community participation, appreciation and support. Eaddy, an author and public relations professional in Myrtle Beach, has led a life filled with experiences that most people may never have, she has lifelong friends and still enjoys meeting new ones, and she is a proud member of the Grand Strand community.

Perhaps it is her small town upbringing that heightens this sense of connection to her neighbors. Born in Hemingway to a business farmer father and teacher mother, her grandfather actually helped found the town at the turn of the century. Around the time of her birth the population in Hemingway was at a scant 1,000.

Her strong character may also have been shaped by her mother, one of the first women in the town to enter a voting booth without her husband in the early 1940s. Though influenced by her Southern roots, her early travels to Europe were life-changing. She lived in a convent in Rome, on a ship in Rotterdam Harbor and spent time in London and Strasbourg. “It was great. I met so many different people and learned to love so many subjects.” Early on, Eaddy learned to create her own family wherever she went.

Eaddy’s love of languages led her to Queens College in Charlotte, where she initially planned to become a United Nations translator. Here she met and was inspired by such great leaders of the Feminist Movement as Gloria Steinem, Pat Carbine and Betty Friedan. Her dream of becoming a translator shifted when she took a journalism course. Inspired by some great newspaper and magazine professors, she took her first news job at the Richmond County Dispatch.
Eaddy’s career as a journalist continued when she went to the University of South Carolina for graduate school. She studied poetry under James Dickey and worked on Capitol Hill for Senator Strom Thurmond.

While working at The State newspaper in Columbia, Eaddy became a grassroots organizer for the League of Women Voters on the behalf of the Equal Rights Amendment. Working with Travis Medlock, who would later become S.C. Attorney General, Eaddy generated support for the ERA by speaking to women’s groups, churches and others to encourage women and minority groups to contact their legislators in support of the amendment. Though the bill failed in South Carolina by a narrow margin, it was the first time public school teachers, the NAACP and the League of Women Voters came together in the state to rally for a common goal.

After working as a journalism instructor at USC Upstate, she began working in public relations with the technical college system. In the 1980s Eaddy was hired at Coastal Carolina University in marketing and public relations. She took a leave of absence to lobby for and work on the gubernatorial campaign of Phil Lader, Winthrop University’s then-president and a candidate in the 1986 Democratic primary.  Eaddy served as his press secretary, and though Lader did not win the election, he later worked with the Clinton administration. Eaddy returned to Coastal Carolina as executive director of the Horry County Higher Education Commission.

Eaddy met Bill Clinton, a friend of Lader’s, in 1988 when he was the governor of Arkansas, and later met Hillary Clinton when she was elected to the Senate for the state of New York. Eaddy has several close friends who have worked in federal departments and at the White House. She has been invited to the White House on several occasions, including a presidential reception for Democratic Women and to witness the signing of the NAFTA treaty. She has even given friends VIP tours of the home during the Clinton adminstration.

In 1989 she started her own public relations firm, Wordsmith, Inc. The firm specialized in public issues and included a diverse group of clients. Eaddy worked with state leaders in education, industry and transportation. Wordsmith teamed up with Conway attorney Richard Lovelace to successfully campaign for Coastal Carolina University’s independence from the University of South Carolina system. Wordsmith also helped develop grassroots support for the Conway Bypass and Carolina Bays Parkway highway projects.

With a strong commitment to public service, in 1995 Eaddy was a presidential delegate in the first White House Conference on Travel and Tourism. She has served for numerous charitable organizations, including the Horry County Mental Retardation Board, the Myrtle Beach Rotary Club, the First Presbyterian Church of Myrtle Beach and the University of South Carolina Journalism Partnership Board. Eaddy is also involved with the Mystery Writers of American and their local chapter.

Eaddy has always enjoyed reading and writing. “I enjoy reading a cookbook as well as a good novel—just anything.” It isn’t surprising to learn that her next project was a book. Eaddy published her first novel in 2010. The Oaks of McCord is the story of a small town and the controversy that erupts when the town’s leaders plan to cut down live oaks to make room for more highways. Eaddy is currently working on a second book in her spare time.

From 2007–2010 she rejoined Coastal Carolina, most recently as interim vice president for university communication. In 2010, Eaddy took a job as marketing and public relations director for Horry-Georgetown Technical College.

When asked if she has enemies, she said, “Oh, yes. When you take a stand and advocate for someone or something, you end up making enemies. But I don’t think they stay enemies for long,” she adds with a smile.

Her description of a good business relationship in a community is fairly simple and convincing. “All business people in a community have many things in common. They will want the community to thrive, because they will then thrive. And they understand they have to put aside their own immediate interest for gain they will have in the long-term. […] The social responsibility element of a business is very important, and I think we who work in public relations and represent those businesses also have a social responsibility as well: to connect businesses with the community in general in a positive way.”

Eaddy feels strongly about the social responsibilities of the Grand Strand. “We are the capital of hospitality and every business should reflect that sense of hospitality no matter the line of business they are actually in. Hospitality thrives on the return of the tourist. Businesses thrive on the return of the customer.”
Above good business practice, Eaddy values friendship. “I have many long-standing friends and love making new friends as well. I am a new friend to someone I met when he was 103. He was still open to making a new friend. That’s how I want to be, open always to making new friends.”

Mary Eaddy is one of those people who make it a point to be very involved and productive in the community. Her giving spirit, strong beliefs, business savvy and philosophy on friendship and family make her one of those rare people who truly aim to make a difference.