Calabash abounds with fresh catches and seaside lore, not to mention superb shopping 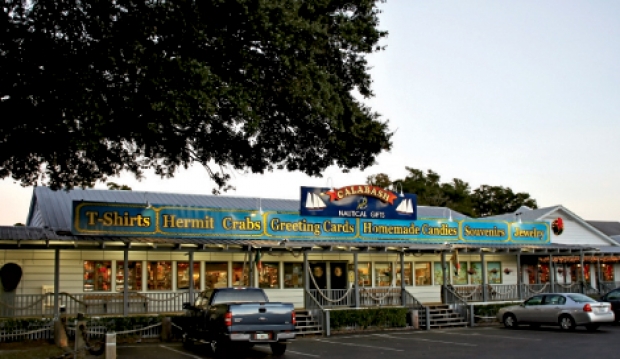 The Grand Strand’s official geographical location is most often described as “coastal South Carolina, running from Georgetown to Little River.” While that may be technically accurate, it seems unfair not include the curious little hamlet of Calabash, twenty-five miles north of Myrtle Beach, and just a half-mile from the northern border of Little River. Calabash is the birthplace of a coastal, Southern food tradition adopted by countless Grand Strand restaurants, is home to some quirky shopping destinations and excellent golfing, and has a delightful, tucked-away waterfront district. And, at less than one mile over the state line, it would seem downright un-neighborly to exclude them.

Many of the little boutiques of Calabash are there to satisfy the throngs of visitors who hop off U.S. 17 to visit the place entertainer Jimmy Durante acknowledged for decades at the close of every show. The vaudeville, radio, and eventual television and movie star would close each program with a nod to a mystery woman. He’d say, “Goodnight everyone, and goodnight, Mrs. Calabash, wherever you are.” The true source of the origins of the “Mrs. Calabash” reference may have gone to the grave with Durante, though one report suggests that he eventually revealed that “Mrs. Calabash” was his pet name for his deceased wife who was fond of visiting the area for seafood. Another rumor was that a local Calabash restaurateur, Lucy Coleman, was the object of his affection.

At the main three-way intersection in the middle of town sits the heart and soul of Calabash shopping—the thirty-two-year-old Callahan’s Nautical Gifts of Calabash, at the corner of River Road and Beach Drive. The sprawling, old, wood-framed building is home to tourist-oriented curios, but also has room after room of collectibles, jewelry, home décor, and distinctive gift items. While there are less than 2,000 permanent residents, the area boasts 1.4 million visitors annually, most of whom find their way to Callahan’s.

Eric Callahan has seen firsthand how business has grown in the store his family opened the year he was born. He also noted that Calabash is essentially the same place he remembers as a child. “This is a quaint, little seafood town, and it hasn’t changed all that much,” he said. “But we do get a lot more year-round traffic than they did at first.” Many come for St. Nick’s Nacks Christmas shop. Located at the far end of Callahan’s, it’s a year-round wonder to behold, with dazzling lights, dozens of fully bedecked and bedazzled Christmas trees, and thousands, perhaps tens of thousands, Christmas ornaments for a spirited season.

Next to the family-run gift shop is another Callahan family enterprise, The Boundary House Restaurant, a sleek, modern restaurant, and one of the few big restaurants in town that doesn’t have “Calabash” plastered all over its signage—though the menu is loaded with plenty of seafood items, to be sure.

I set out in search of “Calabash-style seafood,” a description that remains a bit of an enigma. The answer: “Lightly battered and deep-fried seafood.” That’s it. It’s not complicated. It has to be fresh, it may or may not be served from a buffet line, and really has very little to do with Alaskan Crab Legs, or prime rib—as the Myrtle Beach restaurants promote in their own take on “Calabash.” Calabash mayor Anthony Clemmons takes it a step further. “It’s about the people, and the generations of families that run the Calabash restaurants,” he said. “It’s about the spirit of Calabash.”

Of the several dozen restaurants in town, including an assortment of sandwich shops, pancake houses, and pizza joints, there are only seven “Calabash” restaurants remaining out of the original twenty-three at the town’s peak in the 1980s. The start of the seafood restaurant industry that would promote the Calabash name internationally began humbly in 1923 on the banks of the Calabash River. Under moss-laden Live Oak trees, oyster roasts and fish fries were held regularly outside on the riverfront. These weekly roasts drew hundreds of locals and a few in-the-know visitors. The usual menu: A pot of several dozen steamed oysters, cornbread, and beets. The price: Twenty-five cents.

Coleman’s and Ella’s are among the oldest Calabash houses, and Captain John’s, The Dockside, and Captain Nance’s are named in the short list, as well. Lots of coastal cities claim the “Seafood Capital” distinction, and Calabash is no exception, although its claims may actually carry the pedigree to back it up. Some of the finest, freshest seafood I’ve eaten in the Carolinas came from the docks at the Calabash waterfront—whiting, flounder, spot, pompano, grouper, and of course, shrimp—bountiful all along the Carolina coasts.

Every day the boats deliver fresh seafood to Miss Chandee’s shrimp shack, managed by Emma Norris. “We never know what we’re going to get until we get it,” said Norris. Chandee’s is a simple open-air, wooden hut that has been selling seafood at the same dockside location for about twenty years.

When it’s slow, Norris throws a line in the water and chats with First Mate Danny Odom who runs a half-day fishing charter (for a mere $28) aboard the fifty-foot Starship, a steel-hull vessel designed to support 40 to 60 passengers, who almost always come back with fish. Part of the Voyager Fishing fleet owned by Captain Larry Horowitz, the big boats have been operating from the Calabash docks for around eight years. While most passengers will fish and nod off in cots or chairs, dormitory bunk-style sleeping quarters are available below deck—but this is roughing it. “It ain’t a cruise line,” laughed First Mate Odom. “This is about fishing.”

Beyond the seafood, a visit to nearby Ingram Planetarium for one of its daily star shows, or a tour along the Wine Trail, which leads visitors through Silver Coast Winery in Ocean Isle Beach and La Belle Amie Vineyard in Little River, are further options—both no more than ten-minutes from Calabash. The sandy shores of Sunset Beach are also close at hand.

With so much diversity so close to home, it’s worth expanding your notion of what the Grand Strand is. Maybe, like me, you’ll come to find and accept that the Grand Strand transcends man-made borders, and comes lightly battered and deep-fried in Calabash, North Carolina. Goodnight, Mrs. Calabash, wherever you are.