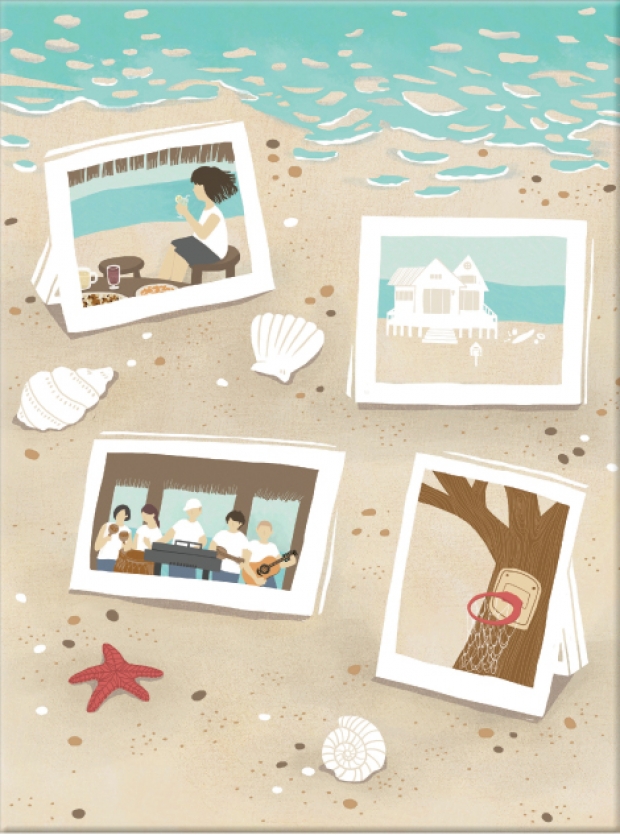 From the top of the manmade mountain paved in concrete slides, I’d watch the clock. Before Water World opened each day with gushes of white water, one of my tasks in the summers of 1986 and 1987 was to sweep the grass clippings, snow cone cups and whatever else had blown into the flumes overnight. The waterslide was a Surfside Beach landmark for decades, with rocky, cave-like features that rose above Highway 17 near Fifth Avenue North.

As one of the teenaged lifeguards who lorded over the place in bathing suits and shorts, I’d often check the sign at Conway National Bank that alternately flashed the time and temperature. On some mornings before our 10 a.m. opening, it was already nearing 90 degrees. We wore mirrored sunglasses and learned to carelessly twirl lifeguard whistles one direction and then the other—ever-watching the pool for stragglers or troublemakers. In the afternoons, distant lightning strikes would often force us to close the slide as the sky darkened and thunder boomed. A shrill blow of the whistle and we could clear the pool.

My family had moved to Surfside in 1980, when the town was 16 years old—a sleepy collection of beach houses on land once part of a 3,000-acre plantation for rice, timber and sweet potatoes. The first time I saw the long stretch of dunes and beach and walked out on the wooden pier, I was 12. My two older brothers and I moved as close as we could to the group of men cleaning king mackerel, and we leaned over the railing to see the snapping mouths of sharks grabbing at scraps of fish in the froth of water below.

Two miles from end to end and one-half mile wide—that’s Surfside Beach. I couldn’t believe my luck. I would pedal the length of it on my bicycle, over and over. Many of the streets weren’t paved at the time, and I remember the week when the big trucks rolled up and smoothed a sheet of asphalt over what had been a sandy, pitted road in front of our small house on Juniper Drive. Wooded, undeveloped lots were all we could see in two directions. My brothers nailed a basketball hoop to a pine tree. We’d hear squirrels chatter and the hoots of owls at night. I learned which nearby houses were summertime “guard houses” where college-aged boys would live together and work as lifeguards. I didn’t trouble myself with their rowdy parties, but in high school—Socastee High held its homecoming parade each year on Surfside Drive—I learned about love in Surfside Beach, and lovesick tears, and kisses on dark beaches where the only light is a silver line across the water, straight from the moon.

For teenagers, it was relatively easy to get a summer job. Friends washed dishes, cooked on the line or waited tables at seafood houses. My brothers worked at the Plitt movie theatre in Surfside and could wrangle discount tickets and buckets of popcorn for their little sister. My own summers were spent with a different job every year or two—scooping ice cream at Painters Homemade; folding T-shirts and arranging bikinis at O.D. Surf Shop; and registering drivers for “licenses” at the Myrtle Beach Grand Prix. And, of course, we had the hot and hazy days at the ocean and Water World.

My friends and I couldn’t get enough of the beach or the sun. Usually we kept close to the pier and the arcade there, with its jukebox that played “Tainted Love” on a too-frequent rotation. Connected to the arcade was the low, concrete block wall where the surfers would gather to check the waves. Some afternoons, I’d go with a group of friends to the Holiday Inn Surfside’s pool, where Mick Mako and the Party Sharks often played—Mick with leopard skin pants and spiky, Rod Stewart hair. One day I borrowed a boogie board and gashed the arch of my foot on something sharp underwater. I remember stepping back on shore and seeing blood on the sand. A lifeguard scooped me up and carried me past the sunburned crowd to an ambulance. I’d end up hobbling up to Water World the next day on crutches. I’d gotten several stitches and instructions from the doctor not to get my foot wet for a while. For most of a summertime month, I was stuck with my foot propped up behind the ticket window while I dreamt of swimming. I couldn’t wait to dive back into saltwater.

Eventually, I’d get a degree in Journalism at USC and start writing for The Sun News and then for other newspapers and magazines. By 1991, I moved down the coast to Charleston. Last Christmas, my parents—who still live in Surfside—showed a video that my brothers made in 1989 of an antique car show my father had organized as part of the 25th anniversary of Surfside Beach. The event drew a small crowd, and family and friends were there.
Jugglers and clowns performed in front of the old IGA Supermarket. A five-man band in white suits played beach music in front the Village Café. As I watched the video’s pre-Hurricane Hugo scenes of Surfside Drive, I thought more about those 1980s days spent around old beach houses and the sound of waves. We had no Facebook or smartphones to interrupt us. Arguments, accidents and other sadness and stress definitely took place. But whatever happened, we could always walk or pedal past the park and the fat oak trees and out onto the beach. We could watch the water, breathe, and get centered again. A person can still do that. I do that. The last time I was at my parents’ house I stepped into the yard around midnight and heard an owl calling through the trees.