Close enough for a long-weekend jaunt and a world away from the maddening crowd, North Carolina’s Southern Outer Banks is worth the trip back in time. 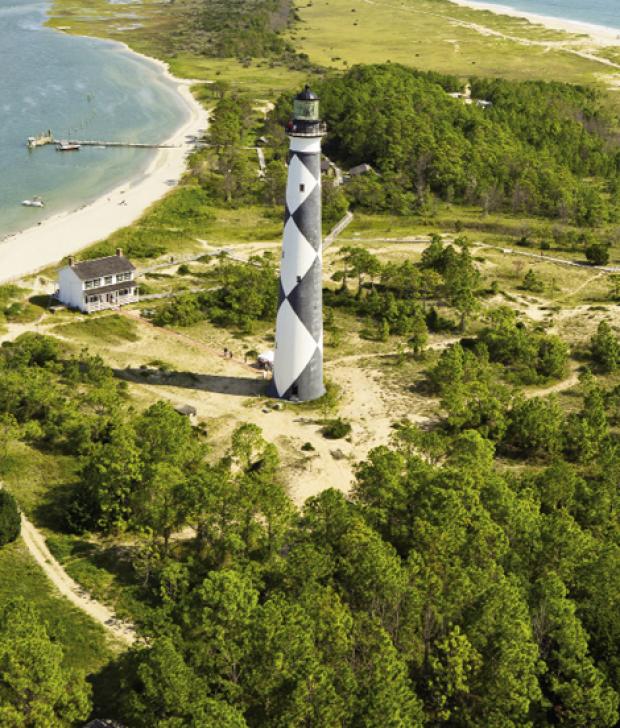 There’s something about the Crystal Coast that stirs the imagination, even inspiring novelist Nicholas Sparks to set two of his bestsellers here, in the historic port town of Beaufort (Bo-Furt to North Carolinians).
Stories unfold all along the 85 miles of its coastal beaches, framed by barrier islands and quaint maritime villages.

An iconic lighthouse stands guard over the “Graveyard of the Atlantic” where Blackbeard’s flagship came to its tyrannical end. Fort Macon gives testimony to a hard-fought right to this land. It’s a place where wild Spanish mustangs have roamed free for 400 years on Shackleford Banks.

The Crystal Coast (N.C.’s Southern Outer Banks) is home to rugged individualists, generations of expert fishermen, and chef-owned eateries that refuse to serve anything but the seafood caught that day from their own waters.

Beaufort is steeped in 300 years of historic lore, and here time seems to have stood still. Dubbed “The Coolest Small Town” by Budget Travel magazine, the charming hamlet is noted as much for its legendary swashbucklers as it is for the restoration of 100 of its Victorian mansions and gardens.

A maritime heritage runs as deep as the waters here and the Crystal Coast is a boater’s paradise. Fishing is a way of life and anglers come by the boatloads to reel in fierce Amberjack and Blue Marlin. And when it comes to diving, how can you beat a spot that offers 2,000 sunken ships to explore underwater?

“Commercial” doesn’t yet exist. And there has to be a good reason that one in three homes are owned by outlanders. Many who visit this part of the Eastern Seaboard want a piece of the simple, raw and romantic way of life the Crystal Coast seems to breed.

Surf, kayak or paddle board around the rugged coastline and estuaries of Emerald Isle. Get lessons from seasoned locals, book a tour or rent equipment. Hit up the Hotwax Surf Shop on Emerald Isle, (252) 354-6466

Explore historic Fort Macon, built in 1826 after the War of 1812 proved how vulnerable American coasts were to enemy attack. The site is now a state park hosting tours, battle re-enactments, an education center and concerts. Find the fort, on-the-double, in Atlantic Beach, (252) 726-3775, ncparks.gov.

This is your chance to see wild Spanish mustangs, descending from a core group that swam from sinking ships 400 years ago to make a new home on Shackleford Banks. The 100-plus horses are considered a heritage breed and are protected. The islands can only be reached by boat, so snag a ferry ride from one of the purveyors on Beaufort’s waterfront.

Go back in time in the historic district of Beaufort aboard a vintage 1967 English double-decker bus as narrators spin legends and spout facts about places of interest and the Old Burying Ground. Book a seat on the double-decker bus, (252) 728-5225, beauforthistoricsite.org.

Get up close and personal with aquatic animals and even pet a stingray at the N.C. Aquarium at Pine Knoll Shores, just west of Atlantic Beach. Nimbus, a rescued white sea turtle, lives here. Big and little kids will have an educational ball conducting diagnostics and giving treatment to sick and injured mock turtles in the “Sea Turtle Rescue” hospital. (252) 247-4003, ncaquariums.com.

Climb 188 spiraling steps up into the 150-year-old iconic “Diamond Lady” lighthouse. Looming over the “Graveyard of the Atlantic,” this lady has been warning ships of the dangerous coastal waters since the 1800s. The lighthouse is part of the Cape Lookout National Seashore on Harkers Island. Get ferry schedules and lighthouse hours at (252) 728-2250, nps.gov.

His name alone, Blackbeard the Pirate, was a feared one. About 295 years ago his flagship, Queen Anne’s Revenge, sank off Beaufort’s coast, leaving a ransom of more than 250,000 artifacts. You can see the ship’s treasures and learn about Blackbeard’s life and times on the Crystal Coast at the N.C. Maritime Museum in Beaufort. Just recently, two cannons were raised from the sea floor, giving experts further evidence as to why the pirate ship was a deadly opponent. (252) 728-7317, ncmaritimemuseums.com

You’ll Eat It Up

Crystal Coast’s “Carteret Catch” program guarantees fresh seafood, which is caught by local fishermen off the coast and brought in daily to the 85 independent restaurants in the area. Expect no less!

Amos Mosquito’s
This favorite and fun eating spot in Atlantic Beach offers a full menu spanning “catch of the day” specials to Jamaican jerk chicken plus sushi. Don’t leave Amos until you have the S’Mores dessert and roast marshmallows over your own tabletop campfire! (252) 247-6222, amosmosquitos.com.

Bistro By-The-Sea
On the waterfront of Bogue Sound in Morehead City, the Bistro offers European flair and a piano lounge. Chef/owner Tim Coyne grew up in an Italian restaurant, but is just as artful with fresh grouper or wahoo with a Chablis-dill sauce as he is with pasta and sausages. (252) 247-2777,  bistro-by-the-sea.com.

Circa 81
Eclectic and creative, this “tapas and cocktaileria” in Morehead City is a foodie paradise inspired by the island’s bounty. Chef/owner Clarke Merrell puts out small plates that pack a tasty punch, like Iberico ham, artisan cheeses and even a pork belly taco with kimchi. (252) 648-8300, circa-81.com.

El’s Drive-In
El’s is a 50-year tradition of Morehead City, more of a drive-up-to than a drive-in since you roll into the parking lot and someone comes to your car to take your order. Favorites include burgers, a renowned shrimp burger and homemade chicken salad loaded with the crunch of celery. Simple and delish—dashboard dining at its best. Cash only. (252) 726-3002.

Hungry Town Culinary Bike Tour
How about pedaling your way around local Beaufort eateries? If FINZ Grill is one of your stops, you’ll be able to try a tasty spicy crab fritter with Dijon remoulade. With this and other delicious stops featured, book your culinary or lunch bike tour for about three hours of fun and food, (252) 648-1011, hungrytownbiketours.com.

The Village Market
A family-owned gourmet deli and sandwich shop which is open breakfast through dinner. Soups, salads and coffees are also specialties here. One of the best pimento cheese sandwiches on toasted sourdough around. A local haunt on Emerald Isle, (252) 354-6592,VillageMarketOfEI.com.

One Stop Stay Shop
The Crystal Coast offers a smattering of hotels, inns and B&Bs. But if you want to experience this one-of-a-kind area to its fullest, take advantage of what Emerald Isle Realty has for rent. Choose from hundreds of bungalows and cottages or stay in one of the “Sand Castles” mansions, like the “z,” featuring stunning three-story views of Bogue Sound and loads of gracious room. (252) 354-3315, EmeraldIsleRealty.com.