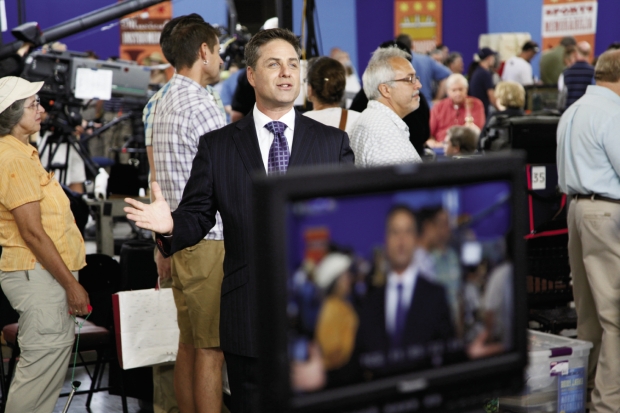 Everyone loves a hometown hero—a famous favorite son from a small town. And we’re no different. When the Antiques Roadshow came to Myrtle Beach, part of the draw for locals was host Mark Walberg.

Walberg is by all accounts family, or at least a neighbor. He grew up down the street in Florence, and spent many summers building sandcastles and catching rays and waves in Myrtle Beach. He graduated from West Florence High School in 1980, then left the area after joining the Young Americans, a musical performance youth group that tours the world offering music workshops in underserved schools. His family encouraged him to go for his dream, and left the door open wide if he needed to return.

He didn’t. He moved on to performing on a cruise ship, where he met his future wife, Robbi Morgan, an actress most famous for her role of Annie in Friday the 13th.  Walberg quickly relocated to Los Angeles to be with Robbi and continue acting. While Robbi continued to performin movies and on stage, Walberg found himself learning the production side of the business when he landed a position as an assistant at Dick Clark Productions.

“If you want to make God laugh, make plans,” Walberg said. He explained that his goal had always been to be an actor. He had no idea he would become a television host, as well as a producer. “It was a circuitous route for me to get where I am—nothing happened the way I expected, but I just followed the path in front of me.”

Walberg’s path changed from production to on-camera one day when a game show host was unavailable. He was a natural in front of the camera, with his easygoing, engaging personality and good looks. Walberg became the announcer for the popular game show Shop ’Til You Drop. He then moved on to host Burnt Toast, a sports magazine show on ESPN. Walberg’s popularity and skills brought the opportunity to host his own nationally syndicated show, The Mark Walberg Show, in 1995.

“All kinds of opportunities will show up and, if you are ready, let them happen,” Walberg said.  And that’s just what he’s done. Since 1990, Walberg has hosted an array of popular talk, reality, competition, and game shows including GSN’s Russian Roulette, FOX’s The Moment of Truth and Test the Nation, TBS’s home improvement competitions House Rules and The Mansion, and CMT’s Your Chance To Dance.  He also hosted FOX’s hit Temptation Island, the highest rated show in the history of the network at the time.

Walberg has had a long, successful career and is currently working on several shows in different states of development under the producing banner of ReMARKable TV Shows, Inc. But whathe’s most proud of is his family. Mark has a son, Morgan, who is currently at Virginia Military Institute on a Navy scholarship, and a daughter, Goldie, who dances with the Pacific Northwest Ballet. He and Robbi have made Los Angeles their home. They’ve been married for 25 years now, and although they both have busy schedules, they find time to spend together and continue to grow together. as a couple Walberg is still involved with The Young Americans. Recently, he directed and produced the feature-length documentary On The Road with The Young Americans.  He is on the board of directors of Goodwill of Southern California and the board of managers of the Hollywood/Wilshire YMCA.

When asked if growing up in Florence, South Carolina, was helpful or harmful for his career, he pointed out that Southerners make great television hosts. “Not just me—look at Oprah Winfrey, Steven Colbert, Morgan Freeman. Even Vanna White is from this area—Southerners aretaught to put others first and be gracious. The Southern pace and the hospitality we learn make us natural hosts. We know how to create a connection before we begin business.”

“The way I grew up, the style of living, helps me be successful because I am authentic. I know the language to speak to anyone, from any walk of life.” Walberg talked about his upbringing, the transience of the South with old and new, and the diversity of Southern aristocracy, Northern transplants and country folk. Walberg said, “I don’t get to pick my audience, so for me, living in the melting pot of the South has allowed me to relate to anyone.”

Walberg is genuine and authentic. Evenwhen he’s been asked the same questions over and over, he remains warm and eager to share without pretense. He connects to his audiences by being himself—“straight, clear, honest and caring.” On Antiques Roadshow and in person, he is calm and gentle, a man who is generous with his laughter, kindness and empathy.

He’s a big star who has worked hard to maintain his Southern roots, which start with hospitality and graciousness to others, no matter who they are or where they come from. Walberg has built “a whole career based on being myself, not scripted, but someone who creates a relationship with viewers.” Even though Walberg is constantly in front of the camera, on stage and surrounded by people who want and need his attention, he stays true to his South Carolina roots and treats everyone he meets like family.