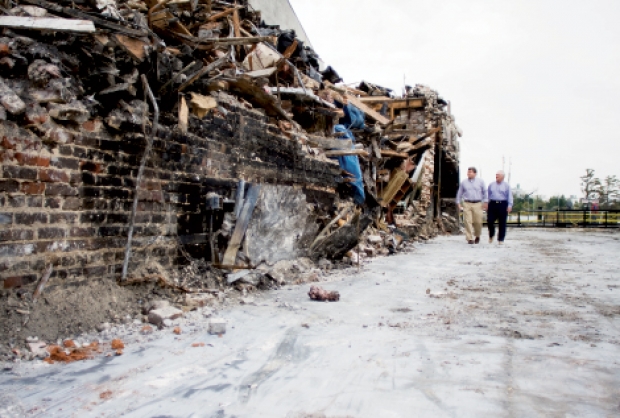 “It was the most awful calamity that has ever visited our town,” said a Georgetown, South Carolina, resident as reported on October 20, 1841, in the Winyah Observer. The devastating fire that consumed much of Bay Street, now called Front Street, was a tragic loss for the state’s third-oldest city. But it wasn’t Front Street’s first fire, or, sadly, its last.

On the morning of September 25, 2013, the cries of residents and business owners spread through the city, carried on the billowing smoke, just as it had 172 years earlier. Fire once again ripped through the Historic District’s waterfront region, specifically the 700 block of Front Street, leaving seven buildings destroyed, another damaged, 10 businesses affected, 130 people out of work, and 13 residents without a home. On September 27 the Georgetown Times’ headline read “GEORGETOWN’S WORST NIGHTMARE BECAME A REALITY.” But even before the fire was completely out, and in the midst of the devastation, business owners were making plans to rebuild, reopen and move forward.

First, however, the hard realities of the tragedy would shake the city for weeks, but also rally its supporters in an outpouring of unprecedented giving.

Disaster and Heartbreak
“I got the call at 5:50 [a.m.],” said Peter Scalise, co-owner of Zest, a Front Street restaurant that had been open for only about 60 days. “Within five minutes I got two more calls. I tried to log into our security camera [video feed] and the cameras were offline. I thought, ‘Well, that’s not good.’” Scalise lives in North Litchfield. He arrived on the scene with his partner, co-owner John Cranston, just in time to watch his new business go up in flames. “I got there about 6:30, just as the restaurant started to burn. By 10 a.m. it was gone. I’ve never been through anything like that before, any natural disaster, and I’m from California.”

Front Street property owner Goudy Miller, of Greenville, S.C., got the call around 6:20 a.m. “Within five minutes I was on my way,” said Miller, who partners with his son Tee Miller in two businesses and properties on the 700 Block. Tee Miller is the Director of Economic Development for the City of Georgetown. On the four-hour drive from Greenville the senior Miller received updates and expected the worst. Fortunately, his building housing Black Mingo Outfitters was saved. The building they owned next to it, at 711 Front St., which housed Goudelock & Co., was not so fortunate. That building was destroyed. All that remains are the centuries-old bricks that property owners, residents and historians hope will be used again in the rebuilding efforts.

Stories from a number of businesspeople and property owners all ring with a sad similarity. While no serious injuries were reported by the residents, mostly living above the now burned out buildings reduced to smoldering rubble, around a dozen pets—cats and dogs—perished in the blaze fought by more than 100 firefighters from 12 fire companies.

The cause of the fire was still under investigation as of press time, but early reports seem to have ruled out arson. The age of the buildings, lack of sprinkler systems, and lack of firewalls allowed the fire to spread through the attics of the buildings affected. Some brick facades remained standing even up to one week after the fire. It was hoped they might be saved, but they finally gave up their struggle and crumbled under their own weight, the final casualties of the devastating blaze.

South Carolina Governor Nikki Haley visited Front Street on September 26 and expressed the sentiment of many. “This is devastating for Georgetown and tragic for South Carolina. It’s horrible to look at.”

The Maritime Museum suffered minor smoke and water damage, but was saved, as was the city’s iconic Clock Tower. A slight smoke odor permeated the region even weeks after the fire was extinguished, and some visitors to Black Mingo Outfitters point to the fire-damaged beams inside the store. “People comment that they see the fire damage on the exposed beams,” said Tee Miller, Black Mingo’s co-owner, “but the charred black spots are from a past fire.”

Front Street’s Long History of Tragedy
Georgetown, once the naval stores and rice exporting capital of the world, has seen more than its fair share of disasters. September’s fire was likely at least the fourth time portions of Front Street burned to the ground.

As the British evacuated Georgetown near the close of the American Revolution in May 1781, one report of the day says they fired their cannons from aboard their Navy ships, setting all of Front Street ablaze. Another report suggests that British loyalists set Front Street ablaze under the cover of night. Either way, the fire spread to nearly two-thirds of the entire city, according to Mary “Muff” Boyd, a historian and member of the Board of Directors for the Georgetown County Historical Society. Boyd has studied the records, the actual hard copies of the region’s newspapers, and agrees that the Front Street area has suffered at least three major fires, and perhaps as many as five. Most of the buildings that burned in September’s fire were from the 1880s. The bricks from those buildings may date as far back as 300 years, and some were used as ballast in transatlantic cargo ships during the Colonial period.

Through fires, countless storms and British and Yankee occupations, Georgetown has seen its troubles. But from these disasters the residents and businesspeople always seem to pull together to find ways to move forward. In the aftermath of September’s disaster, that long tradition continues.

Georgetown on the Mend
Within days of the fire, decisions had already been made to continue with plans for the popular Wooden Boat Show, held on the waterfront and within the surrounding blocks of Front Street each October. The Bridge 2 Bridge half-marathon remained on the schedule of events. Before the dust cleared on the morning of the fire, some businesspeople had already moved at lightening speed, their resolve unwavering, to reopen elsewhere in the Historic District.

As Scalise and Cranston watched their new restaurant burn, they also talked about the possibility of opening elsewhere. An employee of HR Express, the partner’s payroll company, overheard the men and introduced them to a property owner with available space. “By 11 a.m the morning of the fire, we were drawing up the lease to open a restaurant on the 900 block,” said Scalise. “We named it Seven Hundred Modern Grill+Bar, in honor of the 700 block of Front Street.”

“I’m sure everything will be rebuilt,” said Goudy Miller. “But right now most of us have never been through anything like this, so we’re trying to figure out how to clean up and move forward.”
Harborwalk Books, at its Front Street location for 35 years, announced in October it would relocate to 105 Screven Street and hopes to be back on Front Street once a new building is in place.

Doodlebugs and Colonial Floral Fascinations have also relocated to the 900 block, breathing new life into vacant storefronts. “We hope we inspired people to keep moving forward,” said Scalise. “The 900 Block was kind of quiet [before the fire]. Now there are at least three new businesses moving in.”

Some business owners will find it difficult to reopen in the Historic District.

Limpin’ Jane’s chef and co-owner Tara Tracy and her husband, Bryan Shepler, lost everything in the fire—their home and their business. “We now have a winter rental in Pawleys Island,” said Tracy, a chef who has been gaining a reputation and recognition for her creative, farm-to-table locavore menu. “We’ve looked at six or seven different properties from Myrtle Beach to Beaufort [S.C.] for a new space. Limpin’ Jane’s is really going to be hard to replace. When we moved in we had to spend a few weeks cleaning and painting, but everything was there for us to basically open the doors—it was one of a kind, nearly turn-key; tables, plates, silverware, the machines, the kitchen. ... That’s hard to find. And it could be a year before they rebuild here.

“We absolutely want to reopen somewhere,” continued Tracy. “We had been getting a lot of really great press over the past year, and I’d sort of like to stay in the area, because our name has started to gain some traction. The further away from the area we go, the less weight our name will carry, and we’d have to start all over again. But all options are open. We’re tying to stay positive. The community has been really, really supportive.”

Tea & Sympathy, and Cash––Georgetown Helps its Own
As of press time some $150,000 had been raised through a series of fundraising events and from generous individual and corporate donors. The Georgetown Times gave $25,000 to relief efforts. The Georgetown Business Association, the Chamber of Commerce and others help manage the Front Street Fire Relief Fund, in place at the First Citizens Bank. The United Way, The American Red Cross, local businesses including the Food Lion and the Quality Inn, among many others, all contributed tangible help in an effort to ease the suffering of workers forced out of a paycheck and residents forced out of their homes.

“We’ve raised around $80,000,” said Georgetown County Chamber of Commerce President Brian Tucker in early October. “We’ve distributed all but about 10 percent of the money. The effort and the outpouring of support have been phenomenal to witness.”

An effort spearheaded by The Dead Dog Saloon of Murrells Inlet, which faced a devastating fire of its own in 2012, helped raise $5,500 from Murrells Inlet and MarshWalk restaurants.

Many modest individual acts of kindness may only be known between the giver and receiver, but are no less important or impactful. Stories of nearby restaurant owners feeding first responders and displaced residents circulated through the community, giving hope to those facing the difficult weeks ahead.

The Power of Tomorrow
“We’re not completely sure what the future holds,” said Tee Miller. “It’s been non-stop. I wear a few different hats, looking at [the fire] from the city’s perspective, as a business and property owner that’s suffered a loss, and as a resident of Georgetown who cares about the future of Front Street. There’s a lot to think about. What we lost and what we’ve got to do to come back.”

Georgetown is filled with ancestral lineage that dates back for centuries. Though many affected business owners are relative newcomers to the area, they say they’ve been welcomed and feel a kinship with those who’ve called Georgetown home for much longer.

“This is a long way away from California,” said Scalise, “but this is a beautiful place. I love it here.  I won’t leave.”

Though Governor Haley was saddened by the devastation, she also remarked that Georgetown was “open for business,” and would “be OK.”

In a particularly poignant Letter to The Editor, which appeared in the October 3 issue of the Georgetown Times, a mother, Melissa Malone Constable, considered the comments made by her young children, 5 and 7, as they looked through the temporary chain link fence separating the rubble of Front Street from foot traffic. She commented: “Yes, [my kids] were sad about the fire, sad about the pets that died, and amazed at the age of the buildings, but so [also] were they [certain] Georgetown will ‘fix’ this. There was never a doubt in their minds. For me it was a lesson—respect the sadness of tragedy, but don’t neglect the power of tomorrow.”