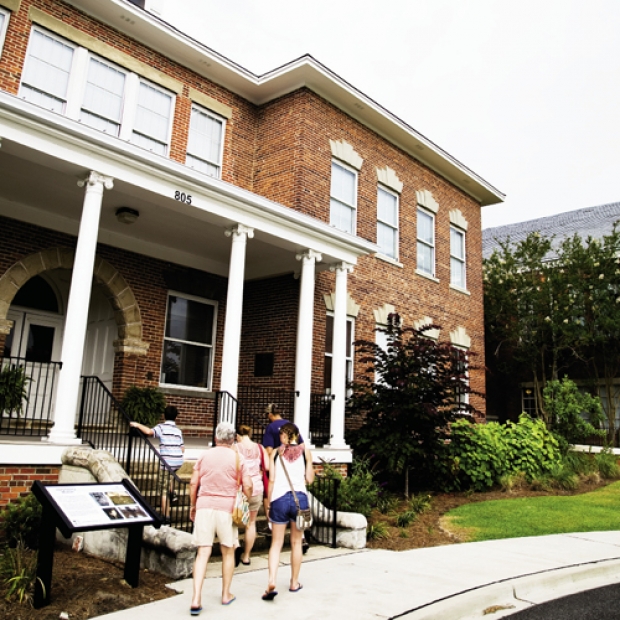 “Dedicated to the discovery and communication of historical knowledge.” This credo was the focus of Walter Hill’s undergraduate education at Coastal Carolina University. Since 2003 he’s been immersed, specifically, in Horry County’s history, first as curator and, since 2009, as director of the Horry County Museum. Newly renovated through a co-mingling of partnerships and private and taxpayer funding, the museum, located in the Historic Burroughs School on Main Street in Conway, sits in the midst of one of the oldest communities in state, one with quite a history of its own.

Just a few miles west on Main Street, out into the rural countryside of Horry County, the L.W. Paul Living History Farm is also under Hill’s jurisdiction as the agro-tourism arm of the museum. Together these two facilities, filled with authentic artifacts, dioramas, and even a working one-horse family farm and homestead, help educate locals and curious visitors of all ages regarding the rich and varied cultural and natural history of the region dating back to 9500 B.C.

Renovation of the Historic Burroughs School (c. 1904) was first conceived in 2002, but it wasn’t until early 2014 that the project was completed, including the restoration of the 642-seat McCown Auditorium, and installation of a 2,500-gallon aquarium as the museum’s centerpiece. A ribbon-cutting and grand opening took place on May 10.

The Burroughs School renovation and construction of the L.W. Paul Farm are the two massive projects undertaken by Hill, Horry County Council and various community organizations, all with the mission of educating residents and visitors and preserving the unique heritage of Horry County. Glimpses of the fascinating histories of prehistoric Native American inhabitants; the Colonial era; the rice, indigo, timber and tobacco industries; the sharecropper family farm and the thriving tourism of the beach awe the visitor and inspire school children. Hill is at the helm of this historic ship, ready to guide it into the future while preserving its legacy.

Easygoing with a friendly manner and slight southern drawl, one he developed growing up in Georgetown, Hill, though quick to smile and share a laugh, is serious and focused when it comes to the important mission of the museum. “We see progress and growth in Horry County,” he said, “and these are great things for us leading to a better quality of life, but what sacrifices do we make? It often costs the historic structures and the loss of community. With this project we could have a bigger, better museum, while preserving an important old building.”

With 10,000 square feet of exhibit space, compared to the 1,800 square feet in the museum’s old Conway Post Office location, this project represents a major achievement for the large numbers of supporters who worked for more than a decade to see their dreams become reality.

Within 11 galleries on two floors, visitors may travel from 9500 B.C. by viewing actual artifacts—arrowheads, stone chisels and pottery found in the area from the first Native Americans who settled in the region—to the development of Myrtle Beach around 1900 through the shag era of the 1940s and ’50s. In between you’ll learn about Peter Horry, the Revolutionary War military leader for whom the county is named, the river culture and its importance to the region, and how wars affected life in Horry County. Native flora and fauna are displayed, showing the diversity of wildlife from the 500-pound American Black Bear to birds, snakes and smaller mammals.

Getting Tanked
The popular Animal Planet reality show Tanked constructed the museum’s large fresh water aquarium earlier in the year, and it will be featured nationally when the episode airs in September (exact air date unknown at press time).

From the air-conditioned comfort of the museum to the hard realities of life on the Horry County farm, one need only travel 10 minutes.


Life on the Farm Not So Long Ago
On a brutally hot summer day, Wayne Skipper, farm site manager of the L.W. Paul Farm, was on his hands and knees pruning and harvesting okra with a sharp knife and a keen eye. He’s been the farm site manager since 2009 and comes by the position honestly. “I was born and raised on a farm, right here in the county,” said Skipper, dressed in overalls, summer sweat dripping from his smiling face. “My daddy was a sharecropper, we grew the same crops we have here. About the only difference is we had a tractor.”

The L.W. Paul Farm, named for local businessman Larry Paul who funded most of the construction, depicts a one-horse family farm in Horry County around 1900 to 1955. Like its in-town museum counterpart, the Living Farm is free to visit and hosts countless busloads of school children and visitors who might experience, firsthand, life in Horry County just a few generations past. A small staff and a group of volunteers maintain the farm and are on-hand to answer questions and conduct the demonstrations.

“We grow a large variety of crops, just like the farmer of the time would have, and we use a mule and old plows [in the farming],” said Skipper. “They were trying to sustain the family without buying much of anything. They would have grown corn, which they ate and fed to the animals. They had a long growing season here and they would have had a broad vegetable garden—cabbage, peppers, tomatoes, all kinds of beans and peas, sugarcane and tobacco.”


Not Always a Dirty Word
Tobacco Heritage Day (10 a.m.–3 p.m. on August 2) depicts a fading and all but forgotten legacy that was vital to Horry County not so long ago. “Just about anyone living in Horry County over the age of 45 had their hands in tobacco,” said Skipper. The event is one of four annual events, which also includes Syrup Making Day (November 8), Christmas at the Farm (December 13) and Smokehouse Day (January 24, 2015). “We’ll harvest hay in September and October and do demonstrations all year long.”

In addition to the 15 or so acres of crops, the farm features a reproduction shotgun homestead; a long house with a clear hallway from front to back, porches on both ends, and lots of windows. The house is a replica of the home Larry Paul was born in and features artifacts from the Paul family farm. Like all the buildings in the 18-acre complex, it depicts the living conditions of a large percentage of families in Horry County through the first half of the 1900s.
Additional functional, working reproduction buildings depict a smokehouse, lumber mill, tobacco barn, cane mill and syrup shed, grist mill and a small church. “We get visitors from all over the world,” said Skipper. “They come to the beach, and then come out to see us. The farm is ever-changing, different all the time.”

“In just one generation we went from up to 90 percent of the families in Horry County living on a farm like this to currently only around 2 percent,” added Hill. “If in one generation’s time these things can be changed and forgotten, where are we going to be in 10 generations?”
Hill and Skipper both would like to see more Horry County residents visit the museums and spend the day sharing in the wonders of this small corner of northeastern South Carolina.