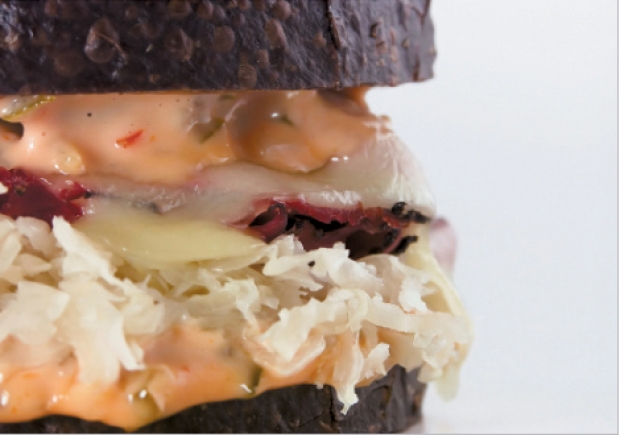 Have you ever sunk your teeth into an authentic New York–style hot pastrami on marble rye? It’s a gooey, gloppy, warm delight of a sandwich made with at least a half-pound of seasoned beef, slathered with Thousand Island dressing (or spicy mustard) and topped with Swiss cheese. No finer culinary experience exists. With a crunchy garlic pickle on the side, it’s a meal made in heaven.

While the Big Apple can’t claim a monopoly on all of the finest delis in the United States, many a damn Yankee will tell you there’s no better place on Earth for a slice of pizza, or a sandwich filled with brisket, corned beef, roast beef, cold pork loin, liverwurst, or pastrami.

But just maybe you don’t have to travel to the cold and wintry North to enjoy the goodness of a traditional New York deli sandwich.

With my first trip to Kaminsky’s New York Deli two years ago, I knew I was in heaven. On a visit during the lunch rush, I couldn’t make up my mind, and the owner working behind the counter, Mike Kaminski, actually yelled at me, although he did it with a sly New York attitude; “Come on! You’re killing me here!” Like a scene straight out of Seinfeld, I was passed over—Soup Nazi–style—as the patron behind me shouted his order to the busy sandwich maker. Behind the counter I watched amazed as meat and bread and tempers flew in organized chaos. The staff quickly made the finest food possible for a fiercely loyal clientele.

Upon subsequent (and less hectic visits), Kaminsky and his wife, co-owner Eva Kaminsky, would chit-chat about their days in New York or their nine years owning Goldberg’s deli in Little River. Mike Kaminsky is particularly proud of his pastrami. “I get this from the same supplier who handles the Carnegie Deli in New York,” he said. “It’s simply the best there is,” and it’s good. It’s juicy, melt-in-your-mouth tender, and perfectly flavored.

There are other delis in town that make good sandwiches, but sometimes they, like Kaminsky’s, are best discovered on your own, giving you personal bragging rights, and real survivor stories.