Alison learned that picture-perfect wasn’t about the little details 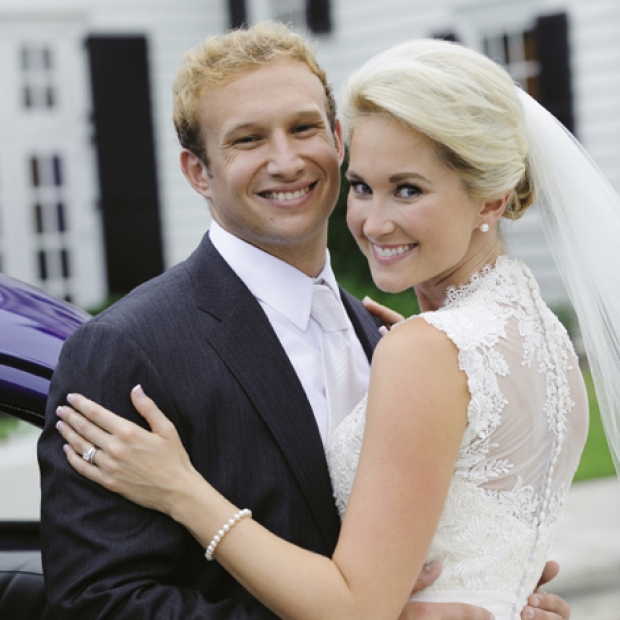 “Take a deep breath, survey those around you, walk down the aisle and just be excited to start that chapter in your life,” Alison Cassidy says, in confident advice to nervous brides.
She knows a thing or two about the deeper meaning behind the veil of cake and flowers on a wedding day.

“I mean, my cake started to melt and we lost the top tier, but all anyone said after is how delicious my cake was,” she adds with a laugh.

It’s when your groom has survived stage four Hodgkin’s lymphoma and rounds of chemotherapy during your courtship that you see your Big Day in a new perspective. That, and when your mom is diagnosed with uterine cancer during your wedding planning. (Both are miraculously cancer-free today.)

“That really helped me when planning the wedding because it’s so easy to get wrapped up and focused on the small things,” says Alison. “What was important was the covenant we were making before God and our friends and family. And it helped my mom to take her focus off of her sickness. She’s the strongest woman I know.”

Alison, 27, and David, 28, met in 2010 at a Christian youth festival in town and have been hanging out ever since. She is a Myrtle Beach native, while he was raised in Pennsylvania before migrating south.

“He was just so much fun to be around, and I wasn’t necessarily looking for anyone,” she recalls. “When we found out he had cancer, friends were asking me, ‘Are you sure you want to get involved in this?’ It didn’t scare me in the least. Our relationship grew in a natural progression.”

Which then progressed into a romantic proposal in Paris on January 14, 2013, when she and David returned to the city where she worked at a fashion press company for a year after graduating from University of South Carolina with a degree in fashion merchandising.

The “City of Love” embraced the couple in love on a famous bridge spanning the Seine which is adorned with hundreds of tiny padlocks left by passersby.

“As we got closer, he told me the story of how couples come to the bridge to lock their love together forever,” says Alison. “So we signed our lock with our names and the year, locked it on the bridge and threw the keys away in the Seine. As if that didn’t melt my heart enough, he then took me to the middle of the bridge, got on one knee and asked me to marry him.”

Alison and David’s future was forever sealed with a kiss on their wedding day on September 21, 2013, at Pine Lakes Country Club in Myrtle Beach.

“I wasn’t necessarily the dreamer growing up,” says Alison. “I didn’t make a scrapbook of what I wanted my wedding to be like. But I did know I wanted it to be at Pine Lakes because I feel it’s the epitome of Southern style. I love the South and being from the South.”

However, as a fashion stylist, she did put her foot down on the particulars of her wedding gown. Purchased at Little White Dress, Alison’s dress was stitched in perfection.

“I love lace and love it as a silhouette, so I wanted something that accentuated the lace line and was very feminine, very soft and delicate,” she says. “But I didn’t want strapless–something comfortable so when I was dancing and hugging everyone, I didn’t have to yank at it.”

Other musts for Alison were sprays of Southern-grown hydrangeas, garden roses and a Southern standard on the menu: shrimp and grits, which was dished out at a station, along with another station of carved meats and one allowing guests to make their own grilled cheese sandwiches, complete with gourmet cheeses, bacon and more.

“We wanted dinner to be fun for everybody, to mingle around,” she says, “not a sit-down dinner where you sit with someone you don’t know.”

The cake, lovingly baked by a friend, mirrored the lace of Alison’s dress on the outside; inside, it was stuffed with sumptuous layers of red velvet with chocolate fudge, vanilla almond, pink lemonade and the newlyweds’ choice, chocolate peanut butter with Nutella filling.

Alison’s classic Southern wedding continued across the reception tables, which were garnished with vintage jewelry, family china, vases, picture frames, books and tiny iron birdcages. Personal touches were woven into moments like a heart-shaped balloon released at the ceremony in honor of David’s younger sister, who passed away two years ago. David’s father, a Baptist preacher in Boston, officiated the ceremony. And, just for the fun of it, the couple and wedding party broke into a rowdy Gamecocks-cheering, towel-waving interlude during the first formal dance.

Alison, a fashion stylist, and David, a financial advisor, live happily ever after in Myrtle Beach.