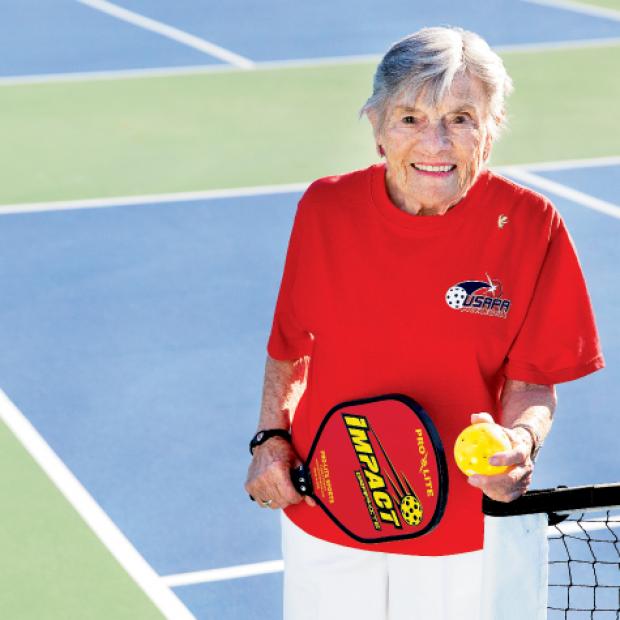 When Myrtle Beach resident Rena Grant moved from Tabor City, N.C., to central Pennsylvania, the U.S. was newly engaged in World War II. Shortly after her move, at just 19 years old, she found a job through a friend that almost tripled her weekly pay. She went from bookkeeping at $18 a week in Wilmington, N.C., to $50 a week working at an aeronautics company making airplane parts for the war effort. There she would eventually meet her husband, Richard Grant, have children, and return to her first loves, athletics and volunteering.

Rena Grant was recently chosen as the City of Myrtle Beach’s Volunteer of the Year from among 600 volunteers, an honor for which she received a $500 cash stipend. Grant volunteered some 788 hours in 2013, mostly on the pickle ball courts at the Crabtree Memorial Gymnasium. She celebrated her 90th birthday in November.

The sharp-witted and friendly-but-competitive woman is full of enough energy to put many people half her age to shame. From where did her long life, health and vitality come? She’ll tell you it’s from her faith, her friends and family, staying active, and eating well.

“God has blessed me with the knowledge, strength, energy and ability to do the things I do,” she said. And what she does is lead people of all ages and abilities to her favorite game, pickle ball, which is a cross between badminton, tennis and ping-pong. As a schoolgirl, basketball was her game, and she couldn’t stay out of the gym. “I played with a lot of heart and had a good eye for the basket,” said the diminutive Grant, who is about 5’1”.

Born in 1923 into a tough farming life with her six sisters, Grant did the work of “boys,” along with her share of the cooking and cleaning. “It was a good healthy way to live,” she said. “We ate fresh fruits and vegetables. It was a great foundation.” She attributes her bouncing back to full health after suffering through colon cancer and a heart infection while in her 80s to this strong foundation.

“My husband died in 1993, and I moved here in 1997,” said Grant, whose daughter Linda Hopkinson is the recreation leader at Pepper Geddings Recreation Center in Myrtle Beach. She is widely recognized as the first to bring pickle ball to the Grand Strand. The game is “easy to pick up,” she says, and the facilities and people working for the City of Myrtle Beach are just the greatest.”

Grant is the ambassador of pickle ball to the area, hosting and organizing tournament play in large annual events. But taking part in day-to-day pickle ball games at the Crabtree Gym is where you’ll most likely catch this great-grandmother, with pickle ball paddle in hand, explaining the game to another new convert. “Just come to the Crabtree Gym and ask for Rena. Tuesday, Thursday, Friday, 10 to 1,” she said.  “If you get bored living in Myrtle Beach, it’s your own fault.”