Pickin' It With the Stars 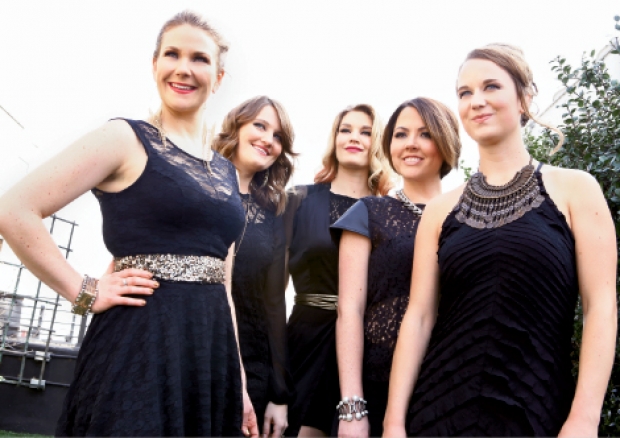 Conway native Jenni Lyn Gardner is on top of the world—or at least the world of bluegrass music. A recent Grammy Award nomination for her band, Della Mae, meant not only a trip to LA to rub shoulders with musical icons, but also a heightened sense of accomplishment for herself and her band members as the vanguard of bluegrass musicians.

Della Mae is five women—Jenni Lynn on mandolin, founder Kimber Ludiker on fiddle, Celia Woodsmith on lead vocals,Courtney Hartman on guitar, and Shelby Means on stand-up bass—whose instrumentals and vocals blend seamlessly to create a traditional bluegrass sound tinged with contemporary sass.  It was the band’s second album, This World Oft Can Be, that garnered the industry nod for Best Bluegrass Album.

“A Grammy is the most prestigious award in music, and for the rest of my life I will be a Grammy-nominated artist,” Gardner noted recently. “That is so amazing to me, and I am honored to have that title.”

Attending the event was exciting not only for the credibility it brings the band, but also, Gardner says, for the opportunity to share the room with musical legends.  “I have looked up to so many of the women that were nominated and performing on the evening of the Grammy Awards,” she explains.  “Although our musical genres are very different, I find inspiration in other female artists like Beyoncé, Pink and Miranda Lambert, all of whom are past Grammy nominees, too. Seeing those women perform and watching how poised and professional they are even off stage was fuel for the fire inside of me to become a better musician.”

Though the 2014 award went to the Del McCoury Band, Della Mae is expected to be a top industry contender for a Grammy in years to come.

Gardner joined Boston-based Della Mae in 2010, and the group quickly gained a broad and enthusiastic following for their fresh take on grassroots bluegrass. Their self-released first album, I Built This Heart, brought a new dimension of original songwriting to their list of musical talents. Della Mae tracks, like their live performances, are alternately playful (“Letter from Down the Road”) and soulful (“Some Roads Lead On,” by Bill McKay), and the band’s shows still include regular bows of homage to their bluegrass ancestry.

That thread of respect and admiration for the roots of her genre runs deep in Gardner, who was just nine years old when she broke out into an impromptu rendition of “Old Joe Clark” with legend Bill Monroe, she on mandolin and he on fiddle. The spontaneous moment transpired in 1993 before Monroe hit the stage at a bluegrass festival in North Carolina, and a photo of the two pickers hangs in the International Bluegrass Museum in Owensboro, Kentucky.

Growing up in Conway in a multi-talented musical family was the foundation for Gardner’s career. “I cannot remember a time when I did not play music,” she said. “My grandmother played the banjo, and so did my father. Growing up, my family and I had a family band, and I co-hosted a bluegrass radio hour with my dad.”

The South Carolina Lowcountry, too, provided a fertile landscape for Gardner’s budding talent.  “There is a sweet spot for bluegrass music in the Lowcountry,” Gardner explains. “It has long since closed, but when I was growing up, Chestnut Mandolins on Main Street in Conway was the place to be on Saturday mornings for ‘bluegrassers’ to get together and play music.  The first mandolin that I ever played and still own was built by the owner of that little store.”

From its beginnings in local bluegrass concerts, Gardner’s career expanded to include performances at the Ryman Auditorium and the Grand Ole Opry in Nashville; touring with the 2007 International Bluegrass Music Association (IBMA) Male Vocalist of the Year, Bradley Walker; and participation in the 2009 IBMA Recorded Event of the Year, “Proud to Be a Daughter of Bluegrass.”

Gardner comes home to Conway as often as possible to visit family members and a close circle of friends. Her brother, local photographer Scott Smallin, who had the opportunity to attend the Grammy Awards with his sister, doesn’t share her appreciation for bluegrass but still explains that her extraordinary talent transcends genres. “I’m more into heavy metal music,” Smallin says, “but when she picks the mandolin, I watch her, and it’s amazing how fast she picks. I can see how you could make a crossover into any other kind of music. It’s just amazing and awesome how fast she can play.”

Gardner moved to Nashville last year and hopes to buy a home and settle down in that land of bluegrass music. Della Mae will begin recording a third album this year, and Gardner notes that “having the Grammy nomination under our belt will be in the back of my mind as I render the confidence to get behind the microphone again.” But this time when the album comes out, she says, “My goal is to win a Grammy.”