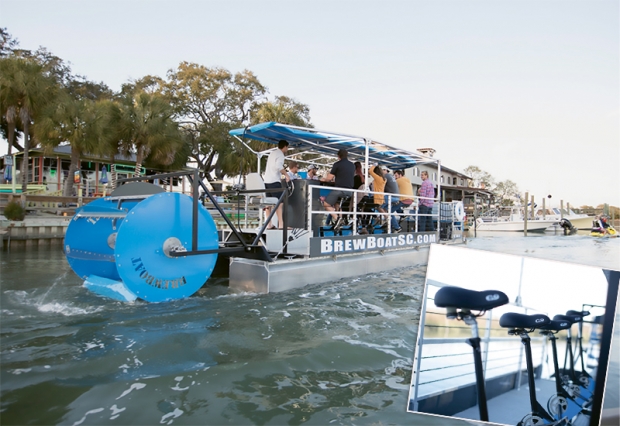 Leave it to Murrells Inlet to find a new way to party—and on a boat, of course.

But not just any boat. One glance at this one, and, well, you’ll do a double take. Wait, are they pedaling that boat?

Meet the East Coast Brewboat, a pedal pub that’s taking revelers on a ride that they’ll power—both in spirit and in muscle.

The first of its kind in South Carolina when it opened in March 2017, the Brewboat is equipped with the usual makings of a party boat—coolers filled with ice to hold your favorite bring-your-own beverages, koozies and a variety of tunes—you can even be the DJ. But come ready to earn your keep, as the bar stools have been replaced with bicycle seats and pedals that literally power this boat.

Mize knew the Brewboat would be a natural fit for the inlet as soon as he spotted one in Portland, Maine. The Murrells Inlet boat, docked along the MarshWalk behind Creek Ratz, was the second one along the East Coast when it opened, helping start the trend that’s now popping up in waterways everywhere. Mize has a second Brewboat that operates in Wilmington, North Carolina.

The hour-long cruises have been a hit in Murrells Inlet, especially with locals, Mize said. The boat has hosted birthday parties, bachelorette parties, neighborhood get-togethers and Meetup groups. A couple was even married on one of the cruises, he said.

The boat operates from March through early December. Cruise times vary by the season so check the website, brewboatsc.com, for the current schedule. Sunset cruises are the most popular, so book early if you’re seeking that slot.

You can round up as many as 15 people to book the entire boat, or book seats for as few as four people to enjoy a cruise with others and make new friends. Cost is $25 a person or $325 for the entire boat.

And come ready to pedal. The boat has 10 pedal stations, with seats for the other five, so revelers can rotate the pedaling duties. A boat of overachievers once went four miles in an hour, Mize said. Others stick closer to the MarshWalk. A few even peter out.

“People have given up on us—we joke that there’s been a mutiny on board,” Mize said.

Don’t fret. There’s a back-up plan. The boat has a battery-driven electric motor if needed. But most captains only like to use it to help maneuver around the docks, staying true to the pedal pub’s purpose.

“He’ll run seven trips a day and won’t even use one bar on the battery,” Mize said. 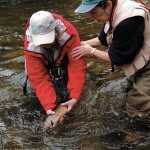 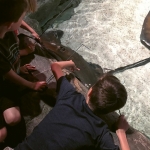 Sharks in the Dark

These fish are the hosts with the most at Ripley’s Aquarium sleepovers
GENERAL TAGS:
Charlie Mize / East Coast Brewboat