A selection of shuckers for every oyster eater 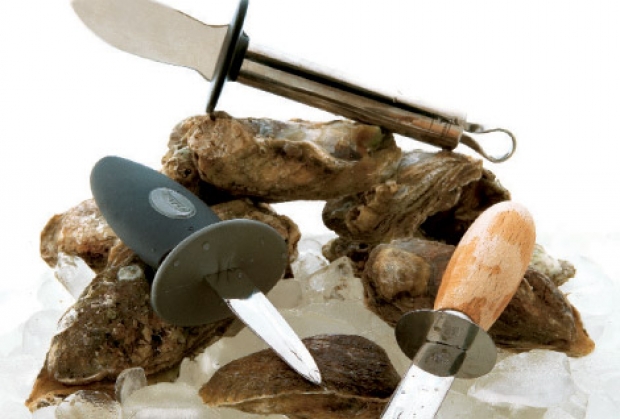 It’s an old love story. The ancient Greeks served them to encourage imbibing. The Romans brought them over from England, placed them in saltwater pools, and served them with wine and sweets. Native Americans prized them as a dietary staple. And during the Victorian era, Americans bestowed the object of their desire with its very own pet name, “the luscious bivalve.” Far from relegating them to the raw bar, oysters were incorporated into all three meals for stews, soups, patties, and puddings. In return for such reverence, the humble mollusk offered the mystical properties of an aphrodisiac wrapped within a sublime dining experience.

It’s no coincidence that prime harvest time for oysters begins during the holiday season and ends just after that lover-liest of fêtes, Valentine’s Day, for that is when the ocean cools and slows down the oyster’s metabolism, preserving its best flavor. The course of true love never did run smoothly, so it is no surprise that is takes a little more than coaxing to open an oyster, as they seal themselves tighter when removed from water. Special shucking knives are the best tools for separating shells as thick blades provide enough leverage to crack the hinge.

While most seasoned shuckers prefer wood handles, others are in favor of neoprene. A thick blade is necessary for twisting, but shouldn’t be so sharp it can slice straight through to the other side.