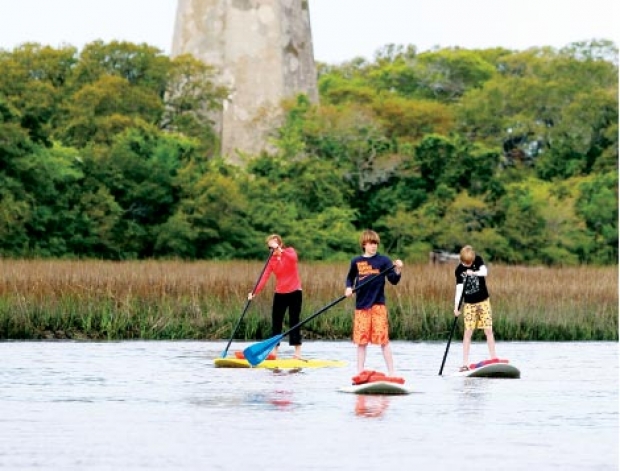 While the Grand Strand is clearly the big numbers winner as far as summertime beach destinations go, there are a few nearby coastal communities worth checking out that are significantly different but maybe don’t have the international fame. Bald Head Island, North Carolina’s southernmost barrier island is one such gem—a corporately owned master-planned community with a reality of its own making.

Just 65 miles north of Myrtle Beach, and an hour and a half away by car, historic Southport, N.C., sits at the mouth of the Cape Fear River. It’s there where the Bald Head Island ferry terminal facility at Deep Point Marina is located—it’s the most common waypoint to the island. Each year the terminal helps the tens of thousands of visitors, and the hundreds of permanent residents, come and go by passenger ferry. The ferries operate on a weather-permitting summer schedule, sailing every hour, day and night, between 7 a.m. and 11 p.m. (longer hours on weekends), and are the only mass transit to and from the island, though private boats may also make the trip.

The ferry terminal buzzes like a small airport with arrival and departure lanes, multiple levels, baggage handlers, and agents selling the $23 roundtrip tickets. Some feel the ferry ticket price helps discourage day-trippers and the dingy T-shirt and flip-flop crowd, and while it certainly has an impact, the island seems happy to welcome just about anyone, though not without restrictions.

The ferry allows the general public, renters and homeowners access to this privately owned year-round playground and retreat. The island has become famous for vacation rentals, as a movie and TV location, golf and croquet, and sales of massive beach homes, smaller cottages, and everything in between. While BHI has one bed & breakfast, the Marsh Harbour Inn, arrange your lodging well in advance, as you won’t be able to wander the streets and find vacancy signs, check-in desks or high-rise condos. And while it’s not absolutely necessary to do so, you’ll probably want to rent a golf cart while you’re there—try Riverside Adventure Company—because this is a no-cars-allowed island where electric golf carts, bicycles and pedestrian traffic are all you’ll see, except for a handful of security and delivery vehicles. For overnight stays, The Island Agency’s rental department (1-800-432-7368) may be the best place to start.

BHI’s visitors run the gamut from retirees to spring breakers, weekend vacationers, young couples, families, golfers and around 200 permanent residents. The island juts out into the Atlantic near the treacherous, infamous Frying Pan Shoals, once home to countless maritime disasters, pirates, Civil War gunboats and blockade-runners.

Syracuse, N.Y., resident Dr. Michael Giordano and his 13-year-old daughter were day-trippers on a recent picture-perfect Carolina afternoon. We met on the ferry to BHI, which sits just two nautical miles offshore. We watched the island’s iconic beacon, the 90-foot-tall, 193-year-old Old Baldy Lighthouse, grow nearer on the 20-minute trip. No longer operational, Old Baldy still shines its inner light, and as the oldest lighthouse in North Carolina, may be its most revered.

Giordano was visiting Wilmington for a chiropractic clinic with daughter in tow. “We’ve never been before, but we love this area,” he said. “Syracuse had the fourth snowiest winter on record this year.” Even in summer, weather is never far from the minds of visiting Yankees who love the moderate climate of the Carolinas. “We’d heard about Bald Head Island, and wanted to see for ourselves.” Whether Giordano will be one of the many who buy second homes on BHI, invest in fractional ownership, or one who takes his family on an extended vacation, remains to be seen, but most who visit agree that a stay of any length on this sizeable island is worth the effort and expense.

Named centuries earlier for its highest, treeless sand dune, which some say once resembled a bald head, the island is situated on 12,000 acres of maritime forest, tidal creeks, rolling dunes, and 14 miles of beach. BHI is technically a part of the larger Smith Island. The gulls cry, dive and follow the ferry into the harbour, home to a busy marina, scurrying baggage handlers, golf cart trams, and the very casual Eb & Flo’s Steam Bar, a popular eatery and watering hole. The view of the harbour, marina and carefully designed shingle homes has a quintessential small-town feel—part coastal Carolina, part New England village, part Disney.

This master-planned community was imagined and engineered by Bald Head Island Limited, the owner of the island, which has been serving its residents, visitors and business owners since 1983 when the George P. Mitchell family purchased the island from fellow Texas millionaire Walter Davis. The Mitchells reportedly bought the golf course, an inn, around 60 homes, and a small restaurant for $15 million to $20 million. No telling how many additional millions have been pouring in the past three decades.

As real estate developers and property managers, BHI Limited oversees the resort and island operations. An elected village council and mayor oversee island governance. The island features nearly 1,200 private residences with thousands of rooms to rent from individual owners or through The Island Agency’s rental department. Narrow paved paths crisscross the island’s developed regions and can be busy thoroughfares with pedestrian, bicycle and golf cart traffic, but don’t get the impression that BHI is a city slapped onto an island—10,000 acres, or nearly 80 percent of the island, will remain undeveloped. An island conservancy protects and studies everything from loggerhead turtles to island ecosystems.

The roads that give access to the many homes, a small shopping district, beaches and resorts become the highways for the many hundred electric golf carts that quietly buzz around at speeds up to 16 mph. Got a turbo-charged golf cart and a lead foot? Don’t drive recklessly, or imbibe in adult beverages while driving, as BHI takes such offenses very seriously—its police have full arrest authority. The fall wedding season is busy for island police and summer sees a few arrests as well, according to the Village of Bald Head Island Department of Public Safety. This is a mostly quiet place, with the exception of a handful of holidays. Careful planning and foresight means no traffic noise, no power lines (all utilities are buried), and homes built among the trees, in harmony with their natural surroundings.

Coastal Urge is a main outfitter of fun on the island renting bikes, paddleboards and other gear. A retail location also sells clothing, shoes, sandals and island accessories and handles scheduling for kite boarding lessons by resident athlete/instructors. Fully clothed, I experienced a quick paddleboard trip under the guidance of Coastal Urge’s Dale Slear. “You won’t fall in,” he said. “If you do I’ll buy you two beers.” As a beer lover I told the 25-year-old Slear that his strategy needed work, as I didn’t really mind getting wet. But in good faith I made a quick loop of the widest part of the creek just behind the Coastal Urge Boardroom rental cottage, and though wobbly at first, I managed to remain mostly dry. Paddleboarding is a sport for all ages. The stand-up surfboard-like paddleboards are perfect for cruising the many tidal creeks of BHI, but the truly adventurous take them into the Atlantic for a combination of surfing and stand-up canoeing.

Kite boarding has taken off as a national coastal pastime for the young and young at heart, and Slear specializes in the sport and its instruction. Here the rider is tethered to a large stunt kite while standing on what looks like a shortened surfboard. The wind fills the kite pulling the rider and his board, sometimes incredibly fast, across the water’s surface. Other outfitters rent kayaks and canoes, but Coastal Urge, on the island for just two years, has outdoor adventure on its mind.

The 18-hole golf course at Bald Head Island Club is a tough and challenging course with narrow fairways and plenty of water hazards, and is a favorite of discriminating duffers from around the world. The private course is open to members only, and for those within certain qualifying rental packages, as are each of the four club restaurants. The club is also home to the world renowned Bald Head Island Croquet Club, and hosts several U.S. Croquet Association tournaments.

The Shoals Club, which sits at the point of BHI, offers unparalleled vistas with both sunrises and sunsets, not to mention two pools, casual fine dining, and a banquet facility—again, not open to the general public, but temporary memberships are available within select rental packages for as little as $150 a week, or $25 per day, with a two-day minimum.

The only grocery store on BHI, Maritime Market, has begun hosting a Full Moon Party once a month on the beach with food, a bonfire, BYOB adult beverages, and a group howling as the sun sets and/or the moon rises over the Atlantic.

Ongoing summertime events include a wide variety of guided tours, birding, yoga instruction, kayaking, guided nature hikes, movie nights and many other activities. A visit to the top of Old Baldy for a 360-degree panoramic island view is a must, as is a visit to its companion Smith Island Museum. Chances are something will pique your interest no matter when you visit.

Home to dozens of the famous and infamous, BHI is also featured in several movie hits including “Weekend At Bernie’s” and “The Butcher’s Wife.” Kate Gosselin and her tribe of kids are known visitors, and Alec Baldwin was reportedly spotted on the island in the recent past.

Several restaurants serve casual fare. While a few may stay open later on weekends, this is not the place for late-night honky-tonkin’. BHI rolls up its sidewalks early, and by intent is designed to be peaceful, upscale, sophisticated and offer a completely different experience than larger coastal communities.

The Island Agency, which is the real estate arm of the BHI Limited, and/or private owners and outside real estate companies will be happy to sell you a 5,000-square-foot $15 million home, like the one on the point, or perhaps a sprawling six-bedroom, seven-bath home for a paltry $3 million. Smaller, forest homes are usually in the $450,000 range, while even smaller two-bedroom condos might sell for around $230,000. Undeveloped lots are available for under $100,000. Price of ownership too high? Vacation rentals in the high season range from a reasonable $1,500 per week to a pricier $12,000 per week for luxury accommodations.

Bald Head Island may not be for everyone, but few can deny the lofty lifestyle possibilities and dreams that stay with you long after the ferry has transplanted you back onto the mainland, and reality.

The official website of Bald Head Island Limited has an overview of the island’s offerings and helpful information such as ferry schedules, vacation rental information and calendar of events.