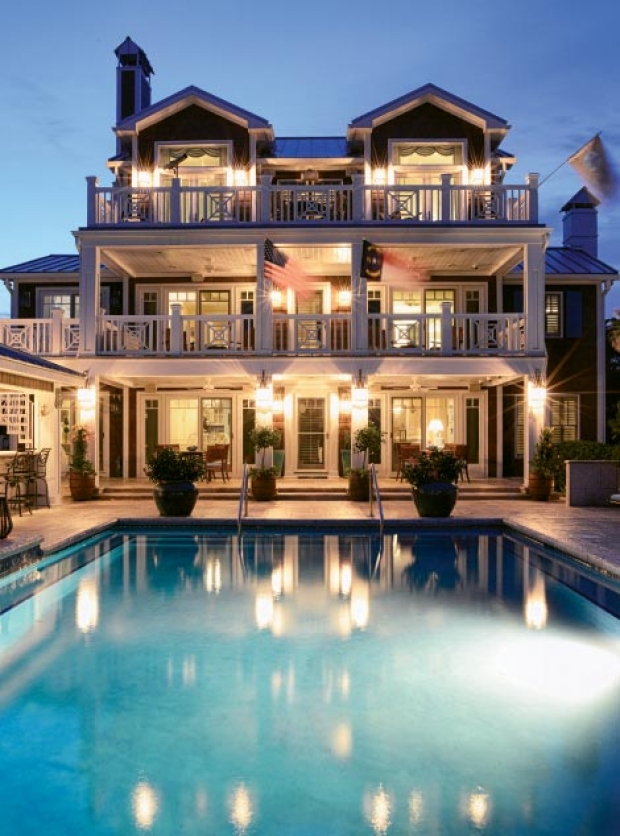 Everyone needs a happy place.

For Carolyn Pou Vanderberg, taking on a moldy, dilapidated 1949 beach house along the Golden Mile and turning it into her custom 7,400-square-foot “Ocean Memories” was like getting another chance to live out all the best of her childhood.

“My family always had a place at the beach,” Carolyn smiles. “We spent summers and holidays here and to this day, when driving from Charlotte, as soon as the land begins to flatten out, I start to relax. We had a cute Cape Cod-style house on 67th Avenue North, but I never stopped dreaming about being back on the ocean … to all those memories of fun and peacefulness.”

Like so many Charlotteans, Carolyn’s ties to Myrtle Beach took hold generations ago.

Her grandfather, Clarence C. Mosack, founded Conbraco Industries in 1928. Based in Matthews, North Carolina, with a manufacturing plant in Pageland, South Carolina, “the company kept moving toward the beach” until the Conway plant opened in 1981. Carolyn herself worked in the family business for 15 years.

And where else would a gifted golfer want to vacation?

Carolyn’s mother, Clara Jane Mosack Pou, was regarded as one of the most prominent ladies amateur players in the Southeast, with 48 tournament wins (including five titles at Dunes Golf and Beach Club). The Charlotte Observer dubbed her “The Queen of the Queen City’s Women Golfers” and she played exhibitions with the likes of Peggy Kirk Bell, Patty Berg, Babe Zaharias and Shirley Spork.

“My mother’s goal was to win 50 club championships in her lifetime,” says Carolyn.

But, two titles from that goal, Clara Pou contracted idiopathic interstitial pulmonary fibrosis and had to retire her clubs when she was 68 years old.

Matt and Carolyn Vanderberg bought 4806 N. Ocean Blvd. as a soon-to-be foreclosure in 2008. It was originally the vacation home of the Peden family of Peden Steel Company of Raleigh and, more recently, was known as one of the places where Anna Nicole Smith stayed in Myrtle Beach before her untimely death.

“[The house] was not pretty,” says Carolyn. “An awkward layout, lots of water damage and repairs, but it survived Hurricanes Hazel and Hugo and had good bones.”

All the couple knew for sure is that they would keep the footprint of the house intact but find a way to get above the dunes and looking right at the ocean.

“We worked with architectural designer Frank Weaver,” Matt says. “He’s really a visionary … seems seven foot tall and draws his plans by hand in pencil. No computers for him. He spent hours talking with us to really understand how we live. … He pretty much told us this place was a gut.”

Gut and go up they did.

Contracting with David Raynor Jr., of Beach Renovators and Design, plans took to life as the mouth of the original staircase turned into an ingenious built-in entertainment center and two floors of new construction took the house up and over the sand dunes.

The pecky cypress walls were salvaged and turned into wainscoting throughout the home. The previous foyer became a formal sitting room and the original master bedroom was smartly converted into a new, state-of-the-art kitchen.
The third floor became the couple’s master suite with wall-to-wall views of the Atlantic and a sitting area with a fireplace. On the second level, three bedrooms with ensuite baths, a clever sleeping alcove with two more beds and a kitchenette make up cozy guest quarters.

Stretching up more that 1,400 square feet, the original two-story beach house went from around 3,000 square feet to more than 4,500.

And, to save the existing Ocean Boulevard-facing garage, that footprint also stayed put with the crowning additions of a one-bedroom suite, exercise room, office and banks of storage compartments. The once modest covered parking with an attic space for servants back in the day now boasts a little more than 2,800 square feet of functional living space, connected to the main house by the shuffleboard deck on the second floor and the beautifully landscaped breezeway at ground level.

The Nantucket-ish “Ocean Memories” is the perfect getaway that pulls the Vanderbergs in like the tide.

“We try to come down every other weekend,” says Carolyn. “And always for Easter, Thanksgiving, New Year’s, Labor Day and to see the best fireworks show over the ocean on Fourth of July.”

“It’s our self-contained entertainment complex that we never want to leave,” Matt adds.

On the oceanfront property, the couple installed the Clara Jane Mosack Pou Memorial Putting Green and the Clarence C. Mosack Memorial Shuffleboard Deck. And for Matt, beach bocce ball lies in the sand just beyond the pool area.

When Matt’s father retired as a navy captain he saved the brass telescope from the USS Mobile. It passed to his son, who cleaned it up. David Raynor Jr., had a wooden box on a stand built for it. Not only that, Raynor configured three porch columns to fit the telescope.

Carolyn named the house “Ocean Memories,” which was the title of a modern dance she choreographed in school that won an artistic award.

“I had the dancers reenact the motions of the ocean waves, and at the end we were on the floor fluttering our fingers like sea foam,” she says, her long fingers tapping out the sea foam dance finale.

Surrounded by family memorials, their lives in pictures and “being able to wake up and see that incredible ocean,” has brought Carolyn full-circle, back to her happiest childhood days.

“Ocean Memories” is indeed a celebration of her life.