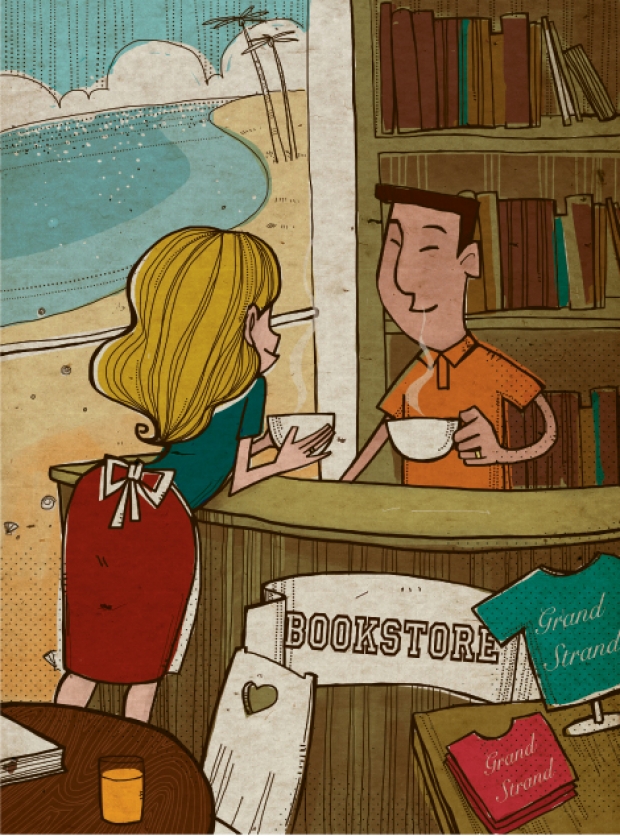 In 1985 my wife and I found ourselves with a few extra dollars and decided to look for a condo in the Carolinas. The idea was to use it as a tax shelter and to spend a week or two, as allowed by law, for our own summer vacation. The only question was where to stake our condo claim: The mountains of North Carolina or the beaches of South Carolina?

We had met and married in Charlotte and had spent a lot of time in both places.

We loved them both—the sweeping panoramas and brilliant fall colors of the mountains, the tidal motions of the ocean and the mysteries that lay beneath that deep blue sea.
So it was not an easy choice.

On a vacation from Wisconsin, where I worked as a newspaper editor and my wife, Elaine, as a pharmacist, we visited the Boone-Blowing Rock area, then headed for the beach. En route, a wise old friend of Elaine’s settled the question.

Well, she said, where do you usually go on vacation?

Well, we said, we usually stop in the mountains—on our way to the beach.

Well, what does that tell you?

Well, OK, it tells we are about to become beachcombers.

We continued on to Myrtle Beach, found our condo and a wonderful ocean view, and never looked back.

Three years later, lured by Grand Strand sand (and, for me, Grand Strand golf courses), we cashed in our chips and made our next stay permanent. Tens of thousands have made similar journeys, leaving the snow and the cold behind and seeking retirement or a new career, a new life in this corner of the world. For us, it was the latter.

When we arrived, Myrtle Beach was small enough to make a mark and big enough to have fun doing it. Initially, we fulfilled a lifelong dream by opening a bookstore, The Whale’s Tale. The mega-bookstores hadn’t found Myrtle Beach yet and we were optimistic. It didn’t take long to realize that 1) the heavily trafficked tourism season is just three months long and 2) a T-shirt shop would have been more lucrative, if not as noble.

In an attempt to pay the rent and put food on the table, I made my way to The Sun News and found a regular paycheck as assistant sports editor. Within weeks I started a column that sent my newspaper career off in a whole new direction.

As a columnist, I’ve attended a presidential inauguration, Master’s tournaments, a U.S. Open, a Ryder Cup and, for three weeks in 1996, the Olympic Games in Atlanta.

None of these assignments would have been possible anywhere else—and especially not from the side of a mountain, no matter how glorious the view.

In the 25 years since eschewing the mountains for the beach, we’ve witnessed the mighty growth of Myrtle Beach as it evolved, almost overnight it seems now, from a summertime-only tourist stop into a robust, thriving, proud year-round community.

Residents and tourists alike are drawn to our theaters, our restaurants, our shops, our sports bars.

Brookgreen Gardens down the road in Murrells Inlet is the envy of the world while Coastal Carolina University in Conway offers our young people a stay-at-home education. The beach, of course, will always be our major asset, accompanied now by a new boardwalk and the largest Ferris wheel on the East Coast.

But golf will always come in a close second. Tiger Woods once called Myrtle Beach “the mecca of golf;” a golf writer, an old friend, referred to us less glowingly as “the Wal-Mart of golf”—a reference, I’m sure, to the worldwide popularity of our golf courses.

Myrtle Beach is home to the World Amateur Handicap Championship, which brings some 4,000 golfers to the beach in the dog days of August. This is, in fact, the only place in the universe that could hold such a tournament because of our 100-plus golf courses and 50,000-plus hotel rooms.

The Myrtle Beach Marathon, an event that jumped the gun on today’s explosive running boom, brings thousands of hardy souls (legs?) to the Grand Strand during the otherwise docile month of February.

I was here when the air base closed in 1993, a setback that many believed spelled doom for Myrtle Beach. I certainly heard all the laments about losing such a valuable asset. But Myrtle Beach rolled up its sleeves and within a few years turned this lemon into lemonade, replacing the air base with the upscale shops and restaurants and new homes at The Market Common.