Each fall, the Grand Strand is treated to the cultural explosion that is the Pawleys Island Festival of Music and Art. The event kicked off in September with an array of great visual art events like Seaside Palette en Plein Air and Chalk Under the Oaks. The fun will continue into October with a variety of great concerts and musical acts, as well as some delectable food and drink.

This year’s impressive musical line-up includes something for everyone. If you’re a fan of blues or jazz, check out A.J. Croce (October 2), son of legendary Jim Croce, who began his career at 18 by opening up for B. B. King.

If R&B is more your speed, take this chance to see Aaron Neville (October 3), a Grammy winner known for songs like “Tell It Like It Is” and “Cry Like a Rainstorm,” his 1989 collaboration with Linda Ronstadt. Neville isn’t the only Grammy winner on this bill. Winning the inaugural 2015 award for Best Roots Gospel Album was Mike Farris (October 8), formerly of the Screaming Cheetah Wheelies and Double Trouble, filling the shoes of the legendary Stevie Ray Vaughn. Now touring with The Roseland Rhythm Revue, Farris plays his own mix of traditional spiritual music and Southern soul.

Steve Tyrell, a successful artist, producer and songwriter who has led many big names to Grammy wins, will also be performing. Tyrell has produced hits for superstars like Rod Stewart and Diana Ross and his himself sold hundreds of thousands of albums. Songs include “The Way You Look Tonight” and “Crush on You.”

Looking for something a little more traditional? Highly acclaimed tenor Ken Lavigne has spent the last nine years performing all over the world, including at Carnegie Hall and for Prince Charles. This will be his third time playing the festival.

Pair this unbelievable set of performances with the Pawleys Island Wine & Food Gala on October 1, one of the fundraisers that helps this festival bring its slew of talent each and every year. Held at The Reserve Club of Pawleys Island, the evening will feature the chance to sample more than 100 wines and enjoy delicious hors d’oeuvres prepared by eight of the area’s top chefs. The night also includes a silent auction, craft beer and a dessert tasting. You can opt to join the Collector’s Circle and taste some choice wines not available to all, as well as sample private chef tastings.

These are just a few of the great performances that will be a part of the Pawleys Island Festival of Music and Art. Visit www.pawleysmusic.com for ticket information and a full line-up of the cultural fun. 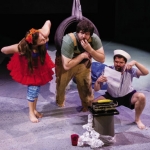 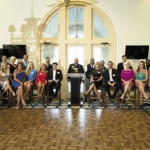 Dancing With the Stars and Pros