August 2014
Written By:
James Ginley
These Crafty Beers add new hops to ‘a cold one’ 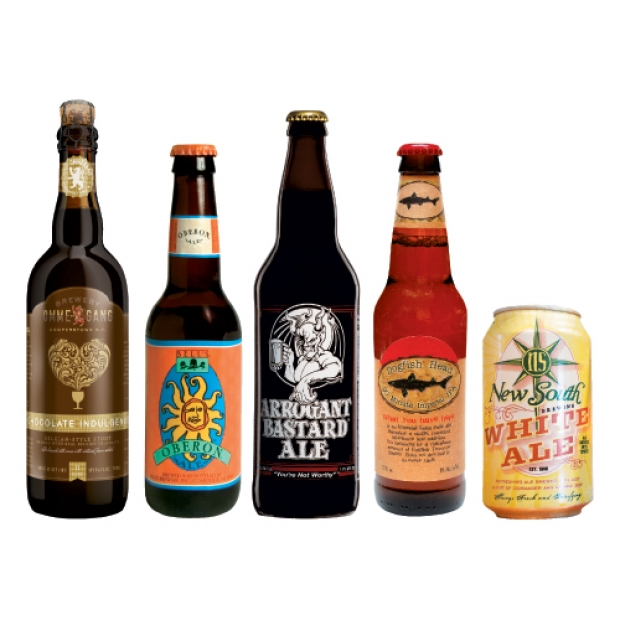 Chocolate Indulgence
Brewery Ommegang
Cooperstown, New York, $14/750ml
Ommegang offers six year-round ales plus seasonal specials and has been creating unique brews since 1997, the same year that Stone was founded. Chocolate Indulgence, one such brew, is made with real Belgian chocolate. It has the aroma, taste and finish of dark chocolate with a hoppy herbal nose. 7 percent alcohol and worth a try.

Oberon
Bell’s Brewery, Inc
Escondido, California, $5/22 ounces
Started way back in 1985 in Kalamazoo, Bell’s Brewery now has 200 employees and distributes in 20 states. The operation can now produce more than 500,000 barrels of beer annually due to several expansions, including a canning line added in 2014. Oberon, its flagship seasonal beer, is a wheat ale with a spicy hop character, fruity aromas, and 5.8 percent alcohol; perfect for hot August days.

Arrogant Bastard Ale
Stone Brewing Company
Escondido, California, $5/22 ounces
This California brewery has been an innovator since its first batch of Arrogant Bastard in 1997. The label claims, “it is an aggressive ale and you probably won’t like it,” but the beer has a 99 rating from Beer Advocate. Stone is trying to build a brewery on the East Coast, and the Myrtle Beach area was still under consideration at press time. 7.2 percent alcohol.

New South White Ale
New South Brewery
Myrtle Beach, $8/6 pack
Since this microbrewery opened in downtown Myrtle Beach in 1998, it has seven ales and lagers sold in draft kegs. In 2009, it began canning the popular White Ale, a classic Belgian wheat ale. Refreshing with a hint of coriander and orange zest. Low alcohol at 4.5 percent.