Behind the Scenes: Grand Dunes and Washington, D.C.-based attorney creates a legacy “off-screen” through his charitable works 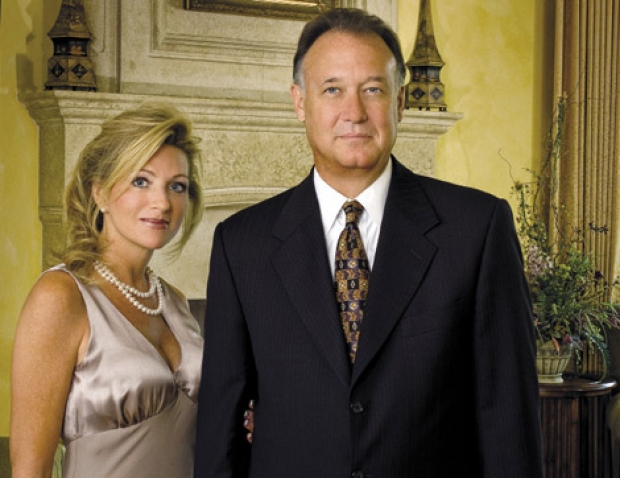 Maybe you saw the 2007 George Clooney film, “Michael Clayton:” Big-city attorney tries to unravel corporate corruption scandal. Car bombs dodged, organized crime fought, and a class-action toxic chemical case tried.
The story is fiction (though some critics at the time thought it was a dramatization of a true story). But that didn’t keep part-time Grand Dunes resident Michael Clayton—who is also an intellectual property attorney in Washington, D.C.—from making headlines when the film hit theaters. The coincidence of sharing a name with Clooney’s character meant instant stardom for Clayton and his family. And the irony, he says, “is that the head of name clearances at Warner Brothers used to work with me.”

Clayton and his wife of five years, Sharon Maria Clayton, look back at that media frenzy (which resulted in headlines on CNN, The Wall Street Journal, and in the Washington Post) with humor. Just a blip on the family radar.

And they still indulge those who inquire about “that Clooney movie” and don’t seem to mind retelling a story they have told a thousand times before: “That they were going to release this movie wasn’t a surprise,” Clayton recalls.

The story “stuck,” it seems, because of the irony: Here was a lawyer, somewhat well-known for protecting other people’s names, and he’d had his name taken for a movie about a corporate lawyer. One with a gambling problem no less.

Clayton and his wife, who spend half their time at their Grand Dunes home, are far more upstanding citizens than the characters in the movie that hijacked his name. Both are heavily involved in charitable works, and his pro bono legacy, while it may not have a movie trailer, has gained a fan following—not the least of whom is Michelle Obama.

The project is the Women in Military Service for America (WIMSA) Memorial in D.C., and it was Clayton’s first real pro-bono pursuit, enduring as his most significant.

It all began with a meeting in a neighbor’s kitchen, Clayton, a partner with Morgan Lewis law firm, recalls. “In 1987 my neighbor, Brigadier General Wilma Vaught (USAF Ret.), came to me and educated me to the fact that women have been dying in combat for the U.S. since the Revolution, and they were without a national memorial.” Clayton would spend the next decade laying the groundwork for the memorial, creating a non-profit foundation to fund it, locating a site to build it—at the foot of Arlington National Cemetery—and finally designing and building the memorial.

In addition to ushering the project through the many different commissions in Washington that are required when you try to build something on sacred ground, he helped the organization raise the more than $22-million needed to build the memorial. “Our firm provided over $1-million in free legal services,” he offers. “And there were more than 40,000, mostly service women, at the opening in 1997.”

While some 200,000 visit the Memorial annually, the tough economy has impaired WIMSA’s funding. “Now we’re struggling to raise more funds to keep it open, because, as you know, many 501-c3 organizations have been hit hard.” First Lady Michele Obama, within the first 60 days of the inauguration, visited the memorial, and has shown an interest in helping raise awareness to help keep the memorial vibrant and open to the public as well as fund the foundation’s education center, archives, and speaker’s bureau.

“All the work I do with the firm is of significant commercial value, but that pro bono work, and that memorial, and the Morgan Lewis name on it, will be there long after we’re gone,” Clayton says.

The Claytons regularly travel back and forth from Myrtle Beach to D.C., and Michael is still involved with advising the WIMSA Memorial Foundation; Sharon is a bit more grounded along the Grand Strand, busy with the work of opening the Frugal Princess Boutique. Philanthropic efforts continue to be at the heart of what makes the Claytons tick, and Michael is also busy with the day-to-day work at his firm.


The Clayton’s have fully embraced the Grand Strand lifestyle, and for Sharon it started when she was a child. “Everyone comes down here for family vacations at some point,” she says. “We used to come down all the time with the boys.” Sharon’s two sons, Anthony and Nicholas Maria, from a previous marriage, both now live in the area.

Anthony, a recent Coastal Carolina University grad works at the Myrtle Beach Marriott Resort & Spa at Grande Dunes, and Nicholas, a sophomore at CCU, is studying Political Science. “With them settling here and at Coastal, we decided this was the place for our second home. Our kids could have gone to school anywhere, but they chose Coastal Carolina University and we could have picked anywhere in the world to have a second home, but we chose Myrtle Beach.”

Michael is a more recent convert to the beach, having formerly stopped here only to refuel at the North Myrtle Beach Airport while building hours on his pilot’s license. “It wasn’t until he met me that he really started coming to visit,” says Sharon.

“I was born and raised on a farm in central Virginia,” says Michael. “Virginia farmers didn’t travel quite as far as Myrtle Beach when we went to the beach.” He was the first person from his family to attend college. “Being raised on a farm I learned the value of hard work—you become very entrepreneurial, and on the farm you could see what it was you did—very tangible results. Law isn’t always like that. The process can take much longer.” Clayton graduated from Wake Forest University before attending law school at the University of Virginia School of Law. He accepted a position with Morgan Lewis, one the world’s largest firms, and he’s been there for 29 years.

Sharon Clayton loves to shop and loves to help people, so Frugal Princess Boutique was a natural melding of those two attributes. The boutique, located in St. James Square (38th Ave N. and Robert Grissom Parkway in Myrtle Beach), provides new and “gently loved” designer clothing with the proceeds going to charity.

“This is a clothing boutique of new and gently loved designer and up-scale clothing,” she explains, “and everything comes from up North, so it’s new to the area and has not been seen before. I’m the buyer for the store and all the clothing will come from New York, D.C., Maryland, that area. There will never be a chance that a prom dress that shows up at my shop was worn by the girl next door.”

Besides the work at the firm and the charitable projects, the Claytons know how to have fun and relax too, which was part of the appeal of Myrtle Beach. While our area may seem hectic to many, even on its busiest days it can’t be compared to the pace of D.C. “We’re big boaters,” says Sharon. “We’ve had our boat ‘Soulmate’ down here docked at Grande Dunes Marina.”

Even with the finer things of life at the Clayton’s fingertips, they’re still able to put their lives into perspective. “I’ve got 29 years of experience and stories about copyright and trademark law,” says Clayton, “but when I really reflect on what’s important and lasting, it’s the things that really made a difference in people’s lives. Both Sharon and I are very fortunate. We try to live by the Jeffersonian ideal. We also believe that ‘to whom much is given, much is expected.’”

• Memberships: International Trademark Association(INTA) Panel of Neutrals. Past member of the board of directors of the INTA and past co-chair of the 2001 Annual Meeting of INTA.