August 2014
Written By:
Harold Rohrback
Photographs by:
Bobby Altman
Home-grown educator is recognized as the Horry County Teacher of the Year 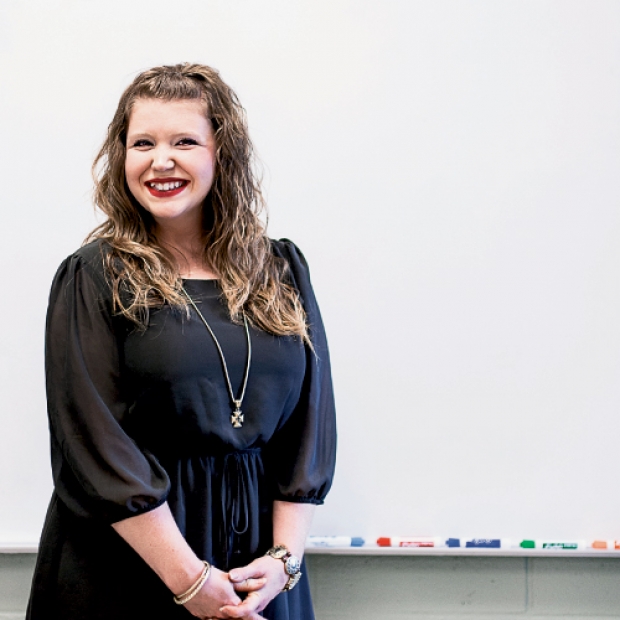 Think of all the favorite teachers you’ve ever had, mold them into one person, and your result will likely describe the 2014–2015 Horry County Teacher of the Year, Kayla Maxwell. When asked about herself, she immediately talks about the people who have inspired and helped her along the way. When asked about her students, her soft voice cracks and she refers to them as “my kids.” “We are so proud of her. She is a great example of everything a teacher should be,” says April Scott, principal at Forestbrook Middle. “She is a special teacher.”
Kayla Maxwell has already come full circle in her young life. She started out as a student at Forestbrook Elementary before attending Forestbrook Middle, then going on to Socastee High. While in elementary school, third grade teacher Barbara Durfey would make a profound impact on her future. “She challenged me and made me fall in love with school,” says Maxwell.

Again, in eighth grade, she encountered an algebra teacher, Elissa Blosser, who would inspire her to excel and then become an important mentor to her, especially during the last four years that Maxwell has been a math teacher at Forestbrook Middle School.

Maxwell spent a year at the College of Charleston before transferring to Coastal Carolina University to complete her degree in Elementary Education. She says during her time in high school, while tutoring after-school students, she realized teaching was her future.

Watching the students grow and mature is one of her greatest pleasures and she is continually amazed at the level of joy she derives from teaching. This is not just a job, it’s a passion, and she credits the kids as the reason for this being the best year of her life. She is currently pursuing a Master’s Degree in Educational Leadership with an eye on administration in the future, but for now she is enjoying making a positive impact on the Grand Strand.