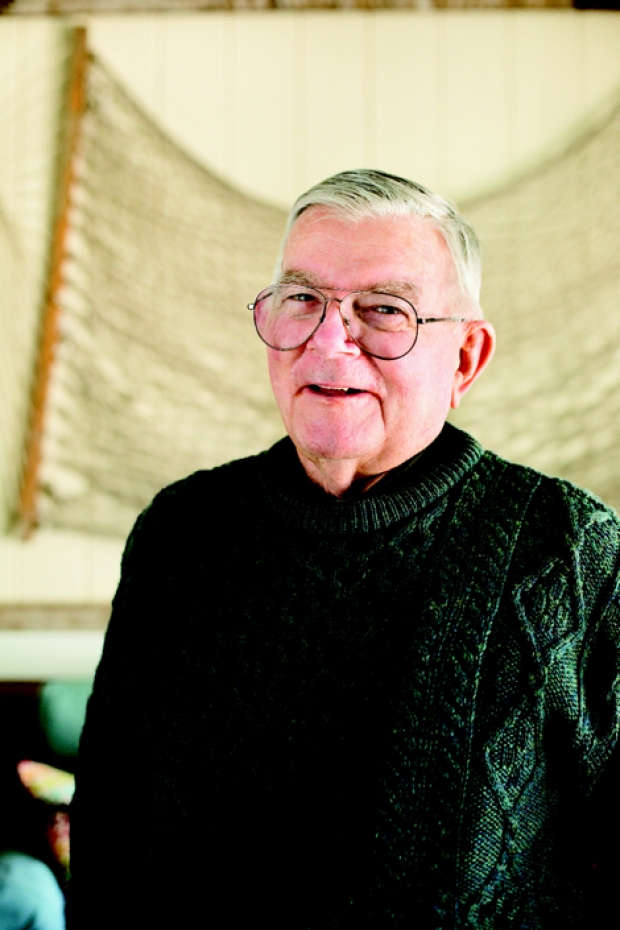 It may well be impossible to come across the name Doc Lachicotte without also coming across the words “living legend” or “visionary.” And for good reason: For the better part of a lifetime, Arthur Herbert Lachicotte, Jr.—known to all as “Doc”—has lived, worked, developed and preserved the Waccamaw Neck.

Doc has always been connected to his hometown, to history, and to hammocks. He grew up in Pawleys Island where his uncle, late-19th-century riverboat pilot Captain Josh Ward, is credited with creating the Original Pawleys Island Rope Hammock, long called the “Rolls Royce of hammocks.” Doc’s parents started selling the hammocks—which the whole family learned to weave—in the 1930s. Back when Doc was a kid, there were no highways and not a whole lot else on the Waccamaw Neck: “When I was young, to get almost everything that people needed to live we had to go to Georgetown—by ferry. Grocery stores, schools, the doctor.”

In 1938, once the bridge to Georgetown was built and the highway was created in Pawleys Island, Doc’s parents built the Original Hammock Shop in its current location on U.S. 17 in Pawleys Island. The family business involved everything from selling beach-caught crabs and oysters to hammocks to making island deliveries.

He’s seen a lot of things change and been a part of many of the changes.

After serving in World War II and graduating from Clemson with a degree in horticulture, Doc returned home to Pawleys Island and opened a nursery alongside his parents’ gift shop. Starting in the early 1960s, the Lachicottes were adding about one store per year to create what has become the village of vintage white clapboard cottages that we know today as a shopping and dining destination in its own right. Doc and his wife, Martha, operated the complex themselves from the late ’60s until they sold it in the 1980s. Long before going local became trendy, the Hammock Shops were already one-of-a-kind and franchise-free. “Each store still is operated by locals who choose to live and work in Pawleys Island,” says Doc.

Although the Lachicotte family is steeped in local history—at least since around 1850—Doc looks ahead more than back: “I hope we continue to have upscale development and make the area better and more livable for future generations. Good zoning has allowed for a high quality of living. We have been able to create a unique community without high rises and too much large-scale commercialism, which has allowed us to maintain our unique island character but still have a healthy, profitable and desirable area to call home.”

Involved in real estate development for decades, Doc founded The Lachicotte Company Real Estate Sales and Rentals in 1991 and now serves as the Chairman of the Board. His numerous accomplishments include being given the Honorary Degree of Doctor of Public Service by Coastal Carolina University in 2009 and receiving the Georgetown County Chamber of Commerce Lifetime of Leadership Award in 2010.

It’s clear from his many accolades that Doc has a knack for knowing how to honor this piece of the Lowcountry his family has called home for generations. Modest about his legacy, he will say he’s most grateful for the opportunities he’s had to share its history and character with others.

Especially close to his heart are Caledonia and True Blue Plantation golf courses in Pawleys Island, which sit on some of the largest historic rice plantations in the Lowcountry. The Ponderosa group, a collection of Doc’s cousins and friends that has been doing business together since the 1960s, purchased the land in 1971 and used it as a hunting and fishing club.

“We have a place over there that we call the Fish Shed, and over the years we have met almost every Thursday night with our core group and friends to eat the rewards of the day,” says Doc. “We still continue the tradition to this day, along with the younger generation of our families.”

Referring to the historic avenue of oaks lined with azaleas and the 19th-century architecture of the clubhouse that overlooks the old rice fields of Caledonia, Doc explains, “We went to great measures to preserve and reflect the natural and historic significance of the property. And we have been so pleased with the public response to our efforts to make Caledonia one of the most special places in the area.” Doc still goes over there to check things out almost every day.

So what about the nickname “Doc”? As a boy, Doc’s father used to tag along on house calls with Dr. Flagg, who lived at Brookgreen and who is best remembered by for having his entire family washed out to sea in the storm of 1893. Tim Duncan, who worked for Dr. Flagg, began to call the young tag-along “Little Doc.” When he became a father, his son inherited the nickname: “When I came along,” explains Doc, “my father became known as Doc and I became known as Little Doc. After my father died, most people then just started to call me Doc.”

Doc Lachicotte, living legend and visionary of the Waccamaw Neck, is also famous for saying there’s nowhere else he’d rather live: “We are blessed to have an incredible location in Pawleys Island. The ocean and salt water are on one side and, just a few miles inland, we have the fresh water river with golf and tennis in between. Everything that makes life nice, we can enjoy right here.” Many of us share this sentiment, thanks in no small part to Doc’s lifelong efforts and legendary vision.