The hospitality industry found them their forever partner. 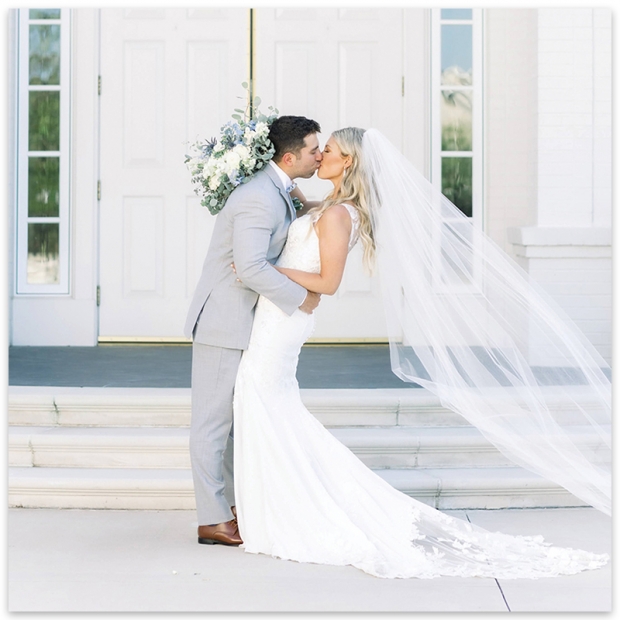 Megan Dempsey and Craig Avantini found their way to wedded bliss in Myrtle Beach by way of working in the hospitality industry in Ohio and Michigan.

They met on the job in 2017: Megan, originally from Dayton, Ohio, as director of catering and Craig, originally based in Fenton, Michigan, as regional sales director, when the company was opening a new hotel at Marathon Petroleum’s headquarters in Findlay, Ohio. The two remained long-distance friends before both moving to Chicago, where they began dating in June 2018.

Three-and-a-half years later, Craig proposed to Megan on February 5, 2021, at the front door of the office where they first met. The milestone surprise came en route to Detroit, where they were flying out to Hawaii for the couple’s annual trip to celebrate Megan’s birthday. Now they’d have two reasons to celebrate!

So what was their love connection to Myrtle Beach? They both grew up vacationing in Myrtle Beach in the 1990s and 2000s. And, when Craig and Megan started dating and flying to Myrtle Beach from Chicago on the weekends, to plan the wedding, they knew that this is where they would celebrate forever. With Megan professionally working in the wedding industry, she knew exactly what vendors and venues she wanted to book at the beach.

The special day took place on April 23, 2022, at First Presbyterian Church in Myrtle Beach. “Knowing religion was very important to both of us, we knew we wanted to get married in church and instantly had a connection with John at First Presbyterian the moment we connected on the phone for the first time,” says Megan.

The bride and groom’s 99 guests flew in from across the United States – even from Canada – to Myrtle Beach to witness (and celebrate) their nuptials.

“For obvious reasons, it was a very special weekend to unite both families,” says Megan.

The lovely, intimate celebration continued at The Dunes Club, where soft, dusty blue, ivory, and hints of gold blended with the heavenly backdrop of the Atlantic Ocean on this spring day at the Dunes Club, where cocktail hour  was held on the club’s lawn and dinner followed inside in the ballroom.

Fun times were had by all, with highlights including live music by the Emerald Empire Band, and a cute cake topper of the newlyweds’ dogs.

Today, both Megan and Craig’s families own property in Myrtle Beach, with plans to open a restaurant in the BLVD building on Ocean Boulevard in Myrtle Beach.

The Avantinis now live in Charlotte, North Carolina, where they both work in hospitality sales leadership overseeing sales teams: Craig as a sales executive for an energy solution provider and Megan for a restaurant tech software company overseeing a team in Charlotte.