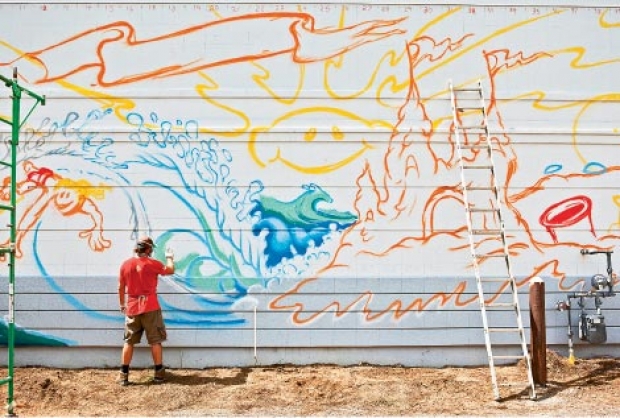 As a teenager, Myrtle Beach resident Drew Brophy had a simple dream: he wanted to surf.

But not just here on the shoreline of his Myrtle Beach community. He wanted to experience the ultimate waves, ride the most extreme pipeline, go to places where the whole world becomes sea and sky. He was a small-town beach kid with dreams bigger than his neighborhood. And though the Dunes beach was cool and the local community of surfers was great, Brophy was looking for more.

Eventually, with the right combination of talent, ingenuity and a little help from his friends, Brophy realized those supersized dreams of his boyhood. As an artist with a surfer lifestyle whose painted surfboards hang at the Hard Rock Café in Las Vegas and are owned by Pearl Jam’s Eddie Vedder, Motley Crüe’s Vince Neil and country artist Uncle Kracker, Brophy has achieved a career that many doubt could even exist. Though he works with big-time names, he credits the people in his small-town community with giving him the right breaks at the right time.

Son of the Sea, founded by Brophy and his wife, Maria, in 2002, creates designs for select clients for use on skateboards, boogie boards, beach towels, cell phones and other items. Basically, Brophy says, “It’s my job to make things look cool.” And look cool they do, as evidenced by Brophy’s recent local project.

Brophy came to town this summer to apply his bold, layered colors and graffiti-like swirls in the form of a mural to the outside wall of Lulu’s Café in downtown Myrtle Beach. “We wanted it to capture a day in the life of the beach,” says Lulu’s owner Misty Coan. This includes the sunning and surfing that define summer around here all the way down to the SkyWheel, banner planes and sandcastles. The finished product not only claims Brophy as a Myrtle Beach native son, but also promises to become an iconic element on the Ocean Boulevard landscape.

The seeds of Brophy’s artistic achievements were planted during high school, when he found ways to combine his twin talents of painting and surfing. “I was always good at art, so I designed T-shirts for Steve Taylor at Native Sons in the late ’80s and early ’90s and worked with Mark Allison at Surf City,” recalls Brophy. Allison also provided a means for Brophy to get to some of the national surfing competitions, further inspiring the teen’s passion for the sport. Meanwhile, local surfboard craftsman Kelly Richards of Village Surf Shop gave Brophy an opportunity to hone his artistic skills. “What I really liked to do was paint surfboards, so Kelly gave me a job painting in his factory,” says Brophy. “I was looking for anything that tied surfing and my art together.”

Andrea Brophy, Drew’s older sister, remembers wondering how her brother came up with the designs that seemed to pour out of him onto the page. “I’ve always been amazed at the creativity inside his head,” she says. “The things that he draws, they don’t come from anywhere else; they come from inside him.”

Brophy’s international career began with an impulsive trip to Mexico at age 20. “I just really wanted to go to those places that I saw in Surfer magazine,” says Brophy. “I kind of felt stuck here; I didn’t fit in. I just gambled and went to the biggest, gnarliest place I could think of to go surfing.” Turns out, the surfers in Mexico fell in love with the innovative designs and techniques Brophy was using to paint his surfboards. “A light bulb went off in my head,” explains Brophy. “I thought, ‘I can make a living painting surfboards in the places I want to be in.’”

In a series of serendipitous moves, Brophy reached Todd Sutz, a Conway native working for a surfboard factory in Hawaii, who happened to have a position open. Within a couple of days, he was explaining to his father, Tom Brophy, that he needed to get on a flight to Hawaii right away. “It might as well have been the moon to him,” Brophy says. But after the son explained, “If I don’t go, nothing great’s ever going to happen to me,” Tom bought Drew a one-way ticket.

Sutz met Brophy at the airport in Hawaii and took him straight to the factory for his first night of work. Sutz recalls, “[Brophy] was a decent airbrusher but an exceptional artist. Over the years, we encouraged him to do more than just work in the surfboard world.”
Now, 19 years later, though Brophy has traveled the world and earned an international reputation for his art, he still values community and family above all else. When he visits Myrtle Beach with Maria and their son, 11-year-old Dylan, “we realize it’s so important to be around his aunts, uncles, grandparents and cousins and learn different things from different people in your family.”

And as for his artistic success, Brophy humbly passes the credit to his hometown: “It took a community to create a person like me.”