Let There Be Art!

Get to the symphony, visit the art museums, see off-Broadway plays and tell your friends that the Grand Strand is a cultural cornucopia just waiting to be discovered 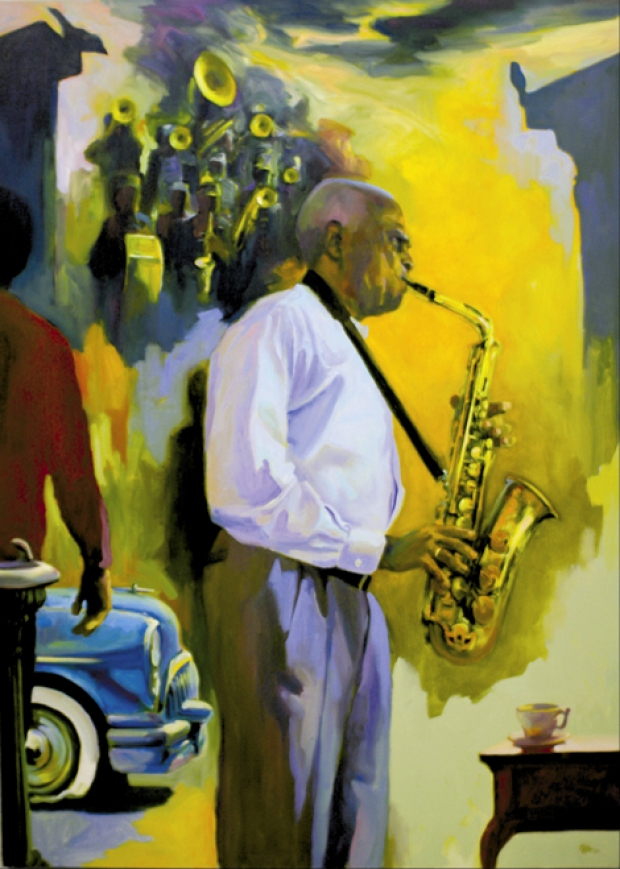 An important part of the Strand’s identity is in the abundance of its musical offerings, but one group proudly moves beyond beach music, theatrical variety shows and covers of “Brown Eyed Girl” to entertain locals and visitors with a little something more substantial.

For 25 years the Long Bay Symphony has plied the area pool of talent for the finest professional musicians to present seasons of symphonic masterworks, pops and even a little rock ’n’ roll. A youth orchestra, guest artist series, chamber ensembles and varied performance locations in Horry and Georgetown counties have combined to make beautiful music on the Strand.

The 2011–2012 season continues through mid-May with an inspiring array of concerts including Bravo Broadway! (March 3), A Musical Tour of Europe (April 15), Youth Orchestra Spring Concert (April 26), and many other performances. For a full schedule visit the symphony’s website, www.longbaysymphony.com.

Watching over the calendar and the nonstop challenge of fundraising, LBS’s Executive Director Carolyn Pittman hears from culture critics and converts on a daily basis. “It disturbs us [when we hear] or read somebody’s complaint,” said Pittman. “And it’s because they haven’t experienced [all that there is], including the symphony. We constantly hear from people who visit or who have moved here, particularly from the Northeast, who are used to professional symphonies. They’ll say ‘We had no idea that this was available.’ The [culture critique] is a misperception. If people get out there and visit the art museums, come to the symphony, hear the Carolina Master Chorale, go to Atlantic Stage, Coastal Carolina University or the Theatre of the Republic to see these great performances, they’ll see there really is culture here in this area.”

Pittman, a long-time local, has held her post for three years and marvels at the growth of LBS from its humble beginnings. “When the Symphony first started 25 years ago, it was a volunteer community orchestra,” she said. “Musicians came together, practiced and put on some concerts. Then [conductor] Dr. Charles Jones Evans came aboard 16 years ago. But just prior to that, LBS had become a professional symphony [meaning the musicians and staff are paid]. And so the musicians come from not only this area, but the larger region as well—Wilmington, Columbia, Charleston.”

Nan Hudson, a local violin teacher, first formed the youth orchestra more than two decades ago. “We have kids come from all over,” she said. “They range in age from 9 years old up to 22 years old. Many of the kids who grow up in the youth orchestra go on to major in music in universities, then on to conservatory. If they’d not had the opportunity to play in the youth orchestra, they would have probably never gone on to play at that level.”

Great cities are known not just for their great symphonies, but also for their great art museums. Boston, New York and Paris are a few obvious examples, but how about in our own backyard?

With its long name and unassuming location near Springmaid Beach, the Franklin G. Burroughs-Simeon B. Chapin Art Museum proves fine art is alive and well on the Grand Strand in two floors of an 88-year-old beach villa, saved from demolition and moved eight miles south to its current location. The museum opened to the public in June 1997.

It is named for two early business leaders from Myrtle Beach and their company’s donation of the land at 3100 S. Ocean Blvd. Though it will celebrate its 15th anniversary in June, most locals and visitors have never set foot inside. Correcting this issue is part of the mission of the staff, but only part. The bigger challenge is finding the right mix of art and sculpture, educational programs, workshops and guest lecturers to meet the standards set by the great art museums of the world. Leading the way for nearly a decade is museum Executive Director Patricia Goodwin.

“Many locals have visited,” said Goodwin, “and many more will visit once they’re aware that not only do we have an art museum in Myrtle Beach, but we have an art museum dedicated to being one of the best in the Carolinas.” The museum is funded in large part by the City of Myrtle Beach and operates as a 501(c)(3) non-profit organization.  Additional funds are raised through gift shop sales, event sponsorships, foundation grants and individual gifts. “We often wish we could record the comments we hear each week: ‘Some of the best exhibits I’ve seen,’ ‘What a surprise to find a museum of this quality in a resort town.’ If more locals could hear the compliments from our many tourist visitors, they would visit with each new show.”

Keeping the exhibits fresh is part of the ongoing work for the staff. They plan their schedule around the seasons, which include exhibits in January through April geared toward the area’s thousands of snowbirds. May through September features exhibits marketed toward the summer crowds, and even empty-nesters get a fall exhibition. While each year is important, 2012 is a milestone for the museum, which is planning a few big events commemorating its 15 years on the Grand Strand.

In honor of the museum’s anniversary, the “I (Heart) Art” community-wide celebration kicks off in February with a community party. Other events include an art-themed mini-golf course set up on the museum’s property in the summer and a fall fashion and “self-expression” month later in the year, all mixed in with programs for children and adults and a rich schedule of exhibitions.

“As our space is small, we [mostly] offer temporary exhibitions rather than permanent ones,” said Goodwin, “but we do have an impressive permanent collection as well,” which includes 21 works by renowned South Carolina artist Jonathan Green, given to the museum in 2009 from Barbara Burgess and John Dinkelspiel, both of whom reside in the Charleston area. The museum also hosts permanent collections from the Waccamaw Arts & Crafts Guild, the Franklin G. Burroughs-Simeon B. Chapin collection and the Bishop Map Collection of Antique Maps.

Eight miles west of Myrtle Beach, Coastal Carolina University has been growing exponentially, especially in the last decade, and now boasts nearly 8,500 students. The school has a nationally recognized curriculum and athletic department.

At CCU, musical and theatrical programs, open to both students and the general public, feature a wide variety of well-known touring artists of international acclaim and programs from equally talented students and faculty with professional resumes in the arts. The visual arts are also an important part of the overall curriculum at the four-year liberal arts school, which offers BAs in Art Studio and Graphic Design. Complementing this educational arts focus, the 1400-square-foot Rebecca Randall Bryan Art Gallery, located on the school’s Conway campus, is celebrating its 10th anniversary and invites the public to experience the transformative power of art. Located in the Edwards Humanities and Fine Arts Building in Room 129, this gallery is dedicated to and driven by the school’s mission of “researching, exhibiting and interpreting, for the purpose of study, education and enjoyment,” a wide variety of works representing the visual arts.

Artist and art professor James Arendt was named the gallery’s new director last October and comes to Conway from the University of South Carolina. “Our focus here is on contemporary artists who can share and discuss their works,” said Arendt, who oversees six to eight exhibits annually. “The gallery is an extension of our classroom.”

Arendt is excited about the gallery’s live installation project from world-renowned sculptor and Charleston native Jonathan Brilliant, who is well-known for his wooden coffee stick creations. The project was completed in the gallery in mid-January and will stay in place until February 17.

“We strive to bring in mid-career artists,” said Arendt. “We search nationally and internationally. We like to deal with a lot of emerging talent. We focus on artists who are doing exciting things right now so that our students, who are just a step behind them, can actually see how they might launch their own careers.”

Twice a year the gallery hosts graduation exhibitions, which is a chance for students to take on their first professional show.

Since 1931, Brookgreen Gardens in Murrells Inlet has delighted visitors from around the world and locals who know about the hidden treasures found at this National Historic Landmark. The thousands of acres at Brookgreen, which include sculpture gardens, several galleries, an accredited zoo, walking trails and native flora and fauna, are the envy of South Carolina communities who fancy themselves the artistic centers of the state, only to have to bow to the Grand Strand’s famed historic garden.

While the gardens are worthy of taking in year-round, spring sees large numbers of visitors who come for the explosion of color as the many flowering plants reawaken. Free monthly newsletters delivered via email share information on many of Brookgreen’s special events, including Birds in Art in the Rainey Sculpture Pavilion through April 22, a Gullah-Geechee exhibit in the Lowcountry Center through March 2 and many other programs, all well-suited to the seasons. Learn more at www.brookgreen.org.

The Strand’s full-time musical review theaters, the Alabama Theatre, the Carolina Opry and the Palace Theater, offer top-notch year-round musical variety shows. The House Of Blues in North Myrtle Beach supplies music fans with the best in touring artists, representing every musical genre under the sun. Additional options await patrons looking for community theater plays and musicals, which are staged at two historic theaters from the golden age of showbiz—the Main Street Theatre in Conway (1947) and the Strand Theatre in Georgetown (1941).

Another group takes its role in theatrical performance to the next level and is now in its fourth season on the Grand Strand. Growing in popularity, especially with snowbirds and locals, Atlantic Stage holds its productions at the 79th Avenue Theatre in Myrtle Beach. First envisioned in 2007, the non-profit group became a reality in 2008. Atlantic Stage is the Grand Strand’s only professional resident theatrical company, meaning it employs the talents of Actor’s Equity Association actors, many with Hollywood and New York stage and screen resumes.

Housed in the theater that was once a part of the original Myrtle Beach Academy for the Arts, Science, and Technology, the Atlantic Stage has partnered with Coastal Carolina University and is just one more piece of the arts puzzle that helps make the Grand Strand enjoyable, proving that we’re more than Coors Light on the beach and Git ‘r Done T-shirts.

“You can lead a horse to water…” and you know the rest. Discover for yourself the multitude of art options waiting to quench your thirst.