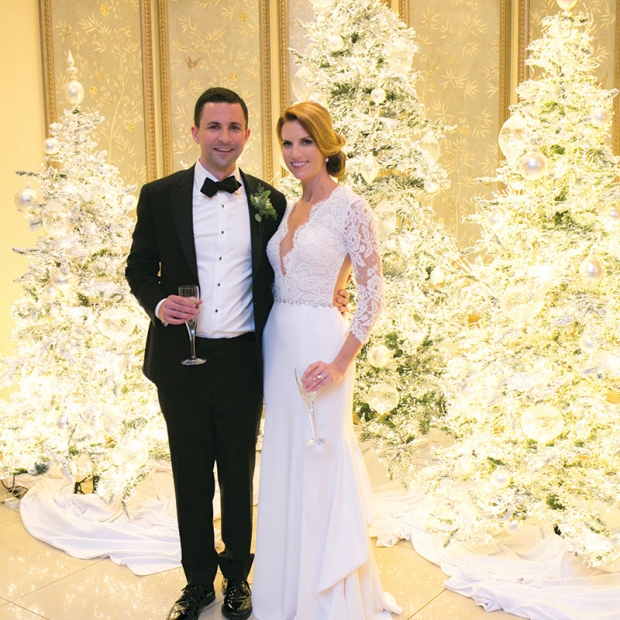 In today’s digital dating world, first impressions of the right profile can lead to clicks and, well, engagements.

When Leslie Thompson’s friends advised her to connect with Bryan Van Horn on a dating app, she trusted their online instincts.

“They encouraged me to go out with him in particular because a lot of his photos were very family-oriented, and right off the bat they thought he seemed like a good guy,” says Leslie. “He also enjoyed biking, which I like being active and my family loves to ride bikes. And he likes to travel, so we definitely had that in common. It kind of worked out with my friends picking him out.”

After their first date in November 2015 in Charlotte, the two went their separate ways, only to reunite at a mutual friend’s New Year’s Eve party, where their connection was rekindled.

“I realized he was different,” says Leslie. “He’s just a good person and very communicative, and just all those things that I felt like I was missing in previous relationships.”

Leslie and Bryan’s courtship continued over the next two years, culminating with Bryan’s proposal. But his first priority was to formally ask Leslie’s mom for permission with a surprise trip to Myrtle Beach, Leslie’s hometown.

“I had no clue. … He had my sister reach out to my mom and stepdad’s closest friends to arrange a ‘dinner with friends,’ but my mom didn’t want to go during the workweek, so her friends told her that it was urgent,” says Leslie. “She was worried sick for days and barely slept thinking something awful was going on with her friends, but once she saw Bryan at Flamingo Grill, she said she instantly knew what was going on. That took a lot of planning on his end.”

Cleared for takeoff, Bryan’s proposal plan was centered on the couple’s date idea jar, where they’d both place ideas for date nights on slips of paper and pull one out when they had a free night to put one of the fun plans into motion.

“One night Bryan recommended that we pull from the date jar for a night out,” says Leslie. “There was a lot of buildup leading up to the moment I pulled from the jar, but I was still shocked when it read, ‘Go on a life date.’ We had been talking it up all week about how we were excited for a weekend when we could finally pull from the date jar. So it was pretty cute!”

As a nod to this special moment, a date jar reappeared at the reception, where guests had the chance to drop in their ideas for the pair.

Leslie and Bryan’s big day rang in the holiday season on December 15, 2018, with the ceremony held at First Presbyterian Church in Myrtle Beach and the reception at The Dunes Golf & Beach Club.

“We wanted neutral colors with a classic feel,” says Leslie. “And we were excited for all the Christmas decor at both venues, so we chose complementary black, gold, gray and white for decor, and white and taupe, with quicksand roses, for the flowers.”

The classic, festive look was complete with faux fur stoles wrapped around the bridesmaids’ charcoal dresses. Leslie walked down the aisle in her elegant Daalarna designer gown alongside her mom, with a veil that both her mom and aunt once wore at their own weddings, and carried a full bouquet wrapped in a handkerchief that belonged to her late father.

All was merry and bright at the reception, where live music was performed by Power 2 Party, and wedding guests were treated to a royal feast.

“We knew the band would definitely be a big piece of it,” says Leslie, “and we knew we wanted to have a fun reception.”

The couple’s fab four food stations featured a lineup of Southern favorites, like shrimp and grits; pork sliders and coleslaw; fresh-carved meats, such as honey dijon roasted pork tenderloin; Mediterranean tapas, including grilled pita triangles, roasted garlic hummus, and tomato and artichoke tapenade; and a chopped salad bar. The other kind of bar was stocked with the standard pours, plus three craft beers. And to pay homage to Bryan’s Dutch heritage, the bride and groom sent their guests home with Stroopwafels as favors (heart-shaped caramel wafers dipped in chocolate).

It was a whirlwind day that Leslie said fell perfectly into place.

“But it will all come together and all be perfect in its own way as long as you just create something that represents you and makes you and your future husband happy,” says Leslie. “At the end of the day, that’s all that matters.”

Today, the Van Horns live in Charlotte, where Leslie is a professor in Nutrition at Winthrop University and Bryan works at SunTrust Banks.