June 2015
Written By:
Kent Kimes
There’s nothing like recycling a week full of garbage to recharge the batteries 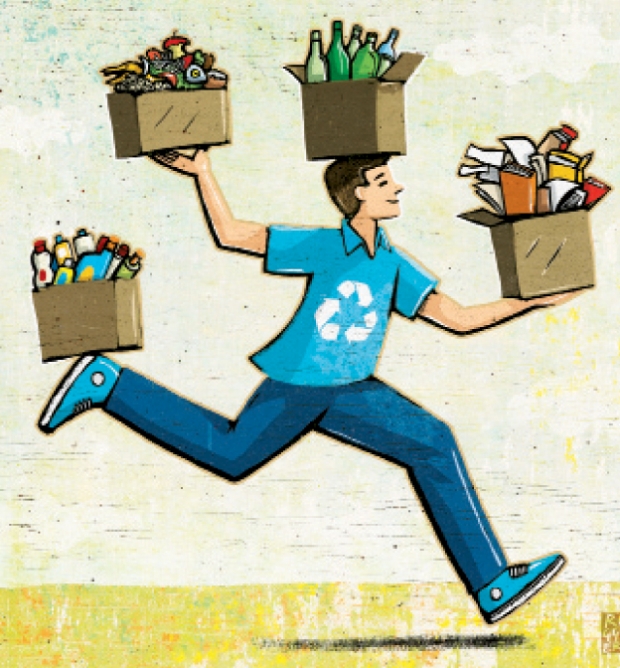 Nearly every weekend when the cacophony and chaos of living with an energetic (hyper?) three-year-old boy and a perpetually-cartwheeling seven-year-old girl gets too much for me to handle, I seek an outlet that extracts me from the house and lets me clear my head for a few minutes—some me time, if you will.

I don’t go to a spa or gym, the driving range or belly up to a sports bar. Instead, I pack up my late-model compact Chevy pickup truck with the week’s worth of recycling, gather the household garbage and head to the Horry County Recycling Convenience Center.

Where we live in the Burgess Community on the South Strand, I have the option of hauling my recyclables really close to the crib at the center on Scipio Lane off Holmestown Road or another one almost as close but a little more scenic of a ride at the McDowell Shortcut center. If I want more me time, I might visit both in the same trip—dropping aluminum cans and glass bottles at one center, then disposing of my household trash at the other. Yes, I burn up more gasoline, but I return home mellow and ready to bond with the brood.

When we moved to a new neighborhood a few years ago, the HOA offered contracted trash service (for a fee, of course), but I quickly put the kibosh on that.

It’s part of my routine, and one I’m loathe to relinquish—a regimen that also involves strictly monitoring what gets recycled and what gets thrown into the regular trash at my homestead, an avocation that has earned me the dubious moniker of the Recycling Nazi ala Seinfeld’s Soup Nazi. No trash for you!

I’m constantly pulling plastic bottles and cardboard boxes out of our trash receptacles and reallocating them to my recycling bins. There is a method to my madness, even if nobody else can see it.
You see, I’ve got a system—and it’s all about separating the co-mingles (aluminum, glass and plastic), cardboard and newspaper/magazines—so that my haul is easier to disperse once I get to the recycling center.

One of my wife’s favorite tricks—and she usually feigns innocence—is to toss boxes into the cardboard pile without first taking out packing materials, plastic sheeting, gift wrapping, et cetera. I learned my lesson after getting to the dump and having packing peanuts blow all over the place. So now I check the boxes before I go.

I’ve got my preparation down to a science, including tying my load down with netting, tarps and/or bungee cords so that I’m not inadvertently littering the landscape on my way to hopefully helping the greening of Horry County.

Those occasions include household hazardous waste (paints, pesticides, fertilizers) disposal days, which are held the third Saturdays of each month, and to pick up mulch that is made from ground-up yard waste such as leaves, branches and grass that’s sold for $15 per ton. Yes, $15 per ton. It’s not the pristine type of mulch you get from home improvement stores or landscaping outlets because it invariably includes pieces of plastic, bottle caps, rocks and other debris. But that stuff is easy to pick out. And come on, it’ll cost you less than an Alexander Hamilton for a truck bed full and you can use it in lower-attention areas like backyards or around playground equipment.

I also take pride in the fact that I haven’t paid for trash pickup service in more than a decade because that’s money that can be used for other things for my family, like gymnastics lessons, after-school programs, State Park passes and soccer leagues.

And it amazes me how many locals don’t know about Horry County’s recycling centers—there are 24 of them spread throughout the county. Call (843) 347-1651 for more info or check out this link for a map and hours of operation: www.solid wasteauthority.org/recyclingcenters.html.

There’s something to be said for curbside recycling and its convenience, but I enjoy my time loading up the week’s haul, exploring some back roads, rolling down the windows, cranking some tunes and doing my small part for the environment.